Chiefs hold back on smart factories after backlash

Half of executives surveyed fear new technologies will fuel distrust

A revolution is stirring in the world’s factories. Industrial robots are breaking out of their cages to work side by side with humans. Autonomous vehicles scoot around factory floors replenishing production line supplies. Giant milling, moulding and pressing machines are learning to communicate with each other. And factories are improving their links with suppliers, exchanging data and rectifying problems, with minimal human intervention.

The age of the smart factory is upon us and with it the promise of a step-change in manufacturing efficiency and productivity. The falling cost of sensor technology and the ability to harvest previously hidden data — hitched to an all-pervasive internet — promises to transform the fabrication of everything from cups to cars.

General Electric, one of the world’s biggest industrial companies, estimates that digitising industrial machinery, networks and processes will not just bring down the costs of manufacturing. The data it generates will open new business opportunities, such as optimising maintenance schedules for customers or improving the design and quality of products. The resulting “industrial internet”, GE argues, has the potential to deliver global productivity improvements that could add $10tn-15tn to global GDP over 20 years.

No manufacturer can ignore the coming revolution. Yet many, in developed economies at least, are wary. A backlash against globalisation, fuelled by decades of decline in America’s rust belt and the erosion of blue-collar jobs, has already upset the status quo in the US, where Donald Trump’s protectionist slogans helped him to win the White House.

Martin Ford
How unprepared we are for the robot revolution 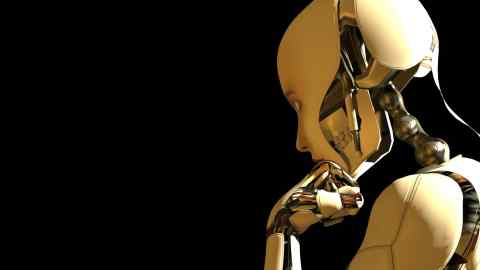 Almost half the 1,370 chief executives questioned in PwC’s annual Global CEO survey published this week fear that this latest industrial revolution will feed further distrust among their companies’ stakeholders — whether they be investors, employees or the wider public.

German manufacturers have been some of the earliest converts to the new technology age, having recognised that unconventional competitors such as Google pose a threat to traditional industries, including carmaking. The government has over recent years led a national campaign to encourage the adoption of the industrial internet under the banner of Industry 4.0, and provided incentives for investment.

But even German business is finding the transition more complicated than expected. Hartmut Rauen, deputy director of the mechanical engineering industry association VDMA, says that many of his members are struggling to identify where the value will finally lie in the new industrial model. Predictions that manufacturers would derive new revenue streams from data-led services remain unfulfilled, he says. Customers are not yet convinced that they should pay for such services. “It is a question of behaviour and it is not so easy to change the behaviour of a customer, and of the whole value chain,” he says.

Yet failure to respond to these new changes would be fatal, says Juergen Maier, chief executive of Siemens UK. “There is only one responsible thing to do and that is to embrace it and see the opportunities,” he says. “We are now in a race as to who uses all of this technology the most effectively to increase productivity and to be globally competitive. If you put your head in the sand you get the opposite. You lose competitiveness and lose jobs.”

If you put your head in the sand you . . . lose competitiveness and jobs

Irmgard Nübler, senior economist at the International Labour Organisation, argues in a recent study that investment in new technology is a defence rather than a threat to industrial employment and should be sold to the public as such. Germany, Denmark, Italy and South Korea invested heavily in robotics between 1993 and 2007. Yet manufacturing’s share of overall employment fell far less in these countries than in the US and UK, where growth in robot use was far lower, her study found. In Germany the decline in industrial jobs as a percentage of the total was roughly half that in the US between 1991 and 2014 — yet it has 301 robots for every 10,000 manufacturing workers compared to just 176 in the US.

ThyssenKrupp, the industrial conglomerate, began to prepare its business for the industrial internet more than five years ago. Stefan Schmitt, ThyssenKrupp’s head of human resources strategy, says the nature of jobs has changed but not the overall number of employees. “It is not robots or humans,” he says. “It is robots with humans.”

Yet those humans will have to learn how to do their jobs differently, whether it is about maintaining the automation that has replaced traditional labour or using the data that their new smart machines generate. Tim Lawrence, a manufacturing specialist at PA Consulting, warns that not enough companies have begun to formulate strategies to retrain their existing workforces.

Blake Moret, chief executive of Rockwell Automation and a member of the executive committee of the US National Association of Manufacturers, says companies will have to give training budgets the same priority as research and development spending. “Life-long learning for factory workers can be a competitive advantage. No matter how much you automate, your people will remain your most important asset.”