Experts are discovering why women are more susceptible to the disease

Nursery teacher Laura Hewitt had always been scatty, so it took a while for her daughters to realise something more serious was behind the changes in her behaviour that began when she was 57.

Mrs Hewitt sometimes found it hard to tell day from night. She thought she had lost her phone when she had it in her hand. But the decline in her spatial awareness was the most worrying. “Her driving was terrible and she often veered into other lanes, which was terrifying,” says her daughter Lauren, who works in corporate PR.

Despite her relatively young age, tests confirmed Mrs Hewitt had posterior cortical atrophy, a rare form of Alzheimer’s that affects the part of the brain responsible for vision. For the past six years her four daughters have looked after their mother, juggling careers around caring commitments. “I’ve lost my mum in pieces. Nothing prepares you for it,” says Lauren.

Mrs Hewitt is one of 600,000 women in the UK with dementia — two-thirds of the total. Despite the gender imbalance, researchers are only starting to investigate fully how the disease affects men and women in different ways.

Age is the main risk factor and since women tend to live longer than men, it was thought this was partly why there were more female cases. But it is now accepted that the condition is caused by degeneration in the brain, which is not solely a function of age.

Maria Teresa Ferretti, an Alzheimer’s researcher at the University of Zurich, says it is vital to look at the complex biological and socio-economic reasons why women appear to be more susceptible.

“We are learning on a daily basis that risk factors are more prominent in women,” she says.

For instance, the hormone oestrogen affects how women’s brains grow and function. Some researchers have suggested less oestrogen means less protection from dementia.

“Women who start their period after 15, or the menopause before 45, or have a hysterectomy, seem to have an associated risk of getting dementia,” says Tara Spires-Jones, a neuroscientist at the University of Edinburgh.

Conversely, having children seems to reduce the risk, perhaps because of hormone surges during pregnancy. But this is not clear-cut, says Prof Spires-Jones. “While natural oestrogen seems to be beneficial, there is conflicting evidence on treatment with hormone replacement therapy.”

Women are prone to other risk factors for dementia more than men. Women have more strokes, which can lead to vascular dementia, and their brains seem to be more at risk from high blood pressure in middle age. Meanwhile, more women than men are affected by depression, which has been linked to the onset of Alzheimer’s.

Women with higher levels of education and demanding occupations build up a cognitive reserve, increasing resilience to brain diseases.

Lauren and her sisters cope by acting as a support group for each other. “I try to be patient with my mum, who cannot do anything herself, but there are times when I have to ask another sister to take over,” says Lauren.

There is also a gender gap when it comes to support, with women accounting for 60-70 per cent of unpaid carers in the UK looking after someone with dementia. Studies show they feel less supported than male counterparts and are more likely to develop clinical depression.

Daughters often give up their jobs because of the demands of caring, says Gill Livingston, professor of psychiatry of older people at University College London. But office skills do not always translate well to full-time caring.

“They often start off trying to solve problems and become more stressed, as dementia can’t be solved,” says Prof Livingston. Studies show that while male carers can be more detached, women worry about not devoting themselves fully to the person they are looking after.

“Which makes me think that men are the natural carers and that our society has got it all wrong,” Prof Livingston adds.

She set up a support programme for carers, Start, which offers a course of coping strategies and has lowered depression rates to a fifth of previous levels.

For those with dementia, drugs may not yet be the answer. After several failed late-stage trials, specialists in the disease are prioritising ways to diagnose earlier, as there is mounting evidence that dementia can take hold in middle age rather than later in life.

It is now thought this happens decades before memory loss is apparent. Some recent studies show that as women typically have better verbal skills than men, they can mask or compensate for early signs of Alzheimer’s.

Doctor Antonella Santuccione Chadhu, chief executive of the Women’s Brain project, an advocacy group based in Switzerland, wants dementia treatments to be better tailored to the gender of the patient, since men and women suffer Alzheimer’s at different rates.

Neuroscience studies on mice tend to concentrate more on males than females, and this can mean drugs are less effective on women. Prof Tara-Spires cites the example of cholinesterase inhibitors, used to help symptoms of Alzheimer’s in the UK, but due to the lack of sex-specific reporting in human clinical trials “we are only just beginning to understand that these drugs may act differently in women”.

Meanwhile, Lauren Hewitt says she is grieving for her mother, even though she is still alive. “The person she is now is not who I want to remember,” she says. 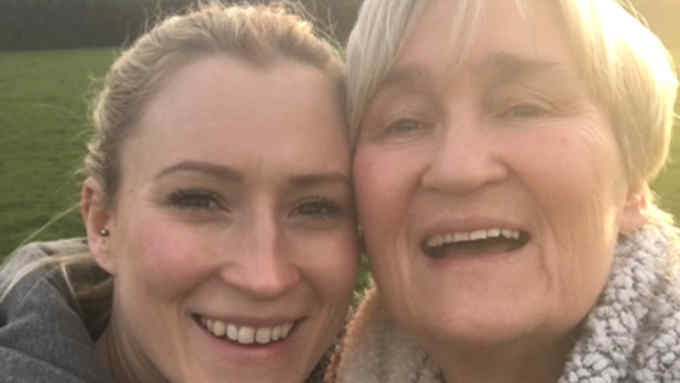