Hyundai Motor is to build its first overseas hydrogen fuel cell factory in China as the South Korean carmaker strengthens its foothold in a fast-growing market for vehicles powered by the energy source.

The plan, announced on Friday, comes as the company accelerates its push into environmentally friendly vehicles, introducing its own electric vehicle-dedicated platform and sharply increasing investments in fuel cell systems.

The move also highlights how some South Korean companies are expanding in China despite pressure from the US. Against a backdrop of trade tensions between Washington and Beijing, global companies are being made to build separate supply chains within China in order to serve the world’s second-biggest economy

Construction of the plant in the southern Chinese city of Guangzhou, which analysts estimate will cost about $1bn, will begin in February and is set to be completed in the second half of 2022. Hyundai will initially produce 6,500 fuel cell systems a year at the facility, which will be used for its Nexo electric SUV.

China is expected to be the world’s largest market for electric vehicles powered by fuel cells, with the country aiming to build 1m of these vehicles by 2035.

“Hyundai wants to compete in China's hydrogen vehicle market, where it is still a leading player, while it is struggling to compete there with local rivals for battery-powered EVs,” said Lee Hang-koo, executive adviser at Korea Automotive Technology Institute. “It is the right move because exporting hydrogen cars made in Korea to China is too expensive, including tariffs.”

In December, Hyundai said it wanted to produce 700,000 fuel cells annually by 2030 to meet growing demand. The company is speeding up the development of hydrogen-powered systems for ships, drones and aircraft, as well as cars. 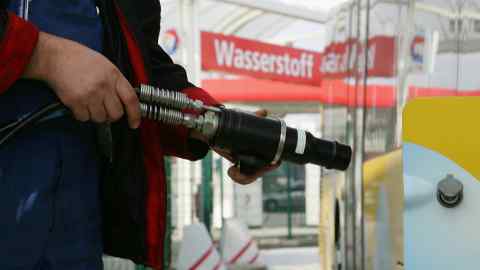 Hyundai had long been criticised for being slow to pursue new technologies. However, it announced a plan in December to invest more than Won60tn ($54.5bn) over five years to shift from traditional car manufacturing into sectors including EVs, hydrogen fuel cells and driverless vehicles. The company aims to fully electrify its line-up in its biggest global markets by 2040.

Proponents of emission-free hydrogen technology, such as Hyundai and Japan’s Toyota, say its use is suited to heavy, long-distance transport, in contrast to purely electric vehicles that face range limits, lengthy refuelling times and battery degradation.

South Korea is keen to develop fuel cell systems, with the government pledging hefty investment. But sales of vehicles that use the technology have been constrained by infrastructure problems, including a lack of refuelling stations.