Why is personal finance not being taught more in schools?

It is the session before lunchtime at University Technical College Heathrow, and a class of sixth-formers is learning about risk and reward.

The students are lively and engaged, debating whether mortgage holders really own their homes, the risks of trading bitcoin and the ethics of gambling. The lessons are not just academic: many of the 16 and 17-year-olds have part-time jobs, and some are already considering apprenticeship offers or student loans.

“We’re of an . . . age to learn about this — to learn how to save, invest and not spend recklessly,” said Myron Mascarenhas, who in the past has traded and even mined bitcoin. “We need the money — we’ve got to save up for what we desire.”

UTC students are not alone in wanting to learn about money matters. With the launch of its Financial Literacy and Inclusion Campaign last year, the Financial Times set a mission to democratise financial literacy with free, engaging content for young people across the UK.

“At FLIC we aim to help young people cope with the reality of everyday life now — from guarding against crypto scams to the fact it’s much harder for this generation to secure affordable housing,” said Aimée Allam, FT FLIC’s executive director.

While financial education has improved in British schools, there is still a long way to go, with teachers citing persistent barriers.

According to a 2021 survey by the London Institute of Banking and Finance, almost three-quarters of 15 to 18-year-olds said they wanted to learn more in class about how to manage their money. But only 15 per cent of the 2,000 students surveyed said school was their main source of financial education.

According to an all-party parliamentary group that is looking at the issue, financial education in the UK is “patchy”, with many exposed to money from a young age but unequipped to handle it.

“It’s probably one of the things they’re asking for the most,” UTC teacher Louise Kelsh said. In her classroom, there is a gulf in understanding, with students way ahead of teachers in areas such as cryptocurrency, but lacking knowledge of more mundane aspects of money management.

Sharon Davies, chief executive of education and employability charity Young Enterprise, said teacher confidence, lack of access to support and training, and a dearth of incentives were causing financial education to fall off the timetable.

“Teachers are under enormous pressure, so even putting it on the curriculum is not enough,” she said. The subject is not on the statutory curriculum in English primary schools but has been for secondary schools since 2014.

The Money Charity, which focus on money management support, described its inclusion as a “Pyrrhic victory”. Financial matters, it said, were still not taught consistently due to a lack of “resourcing, teacher training and prioritisation”.

Mark Fawcett, founder of We Are Futures, a branding agency that connects companies and schools, said that greater accountability in educational establishments could improve matters. He suggested including financial education in school inspections and making teachers answer for not focusing on it.

But educators insist supportive measures — carrots rather than sticks — are more effective. Government funding for England’s schools has fallen in real terms in the past decade and, according to the Institute for Fiscal Studies think-tank, will return to pre-austerity levels only next year.

That would leave budgets squeezed, even as schools face additional demands to help children catch up on lost learning, and progress emotionally and socially in the wake of years of lockdown disruption due to the coronavirus pandemic.

According to a study by survey app Teacher Tapp, 63 per cent of teachers said a lack of time was the main barrier to creating a financial education programme. Training is also a problem: 13 per cent cited a lack of subject expertise as the main obstacle.

“We tend to have shovelled more and more into schools’ responsibilities overall, without taking anything out,” Fawcett said.

This, he added, has affected disadvantaged children disproportionately as the schools they attend tend to be more stretched. “Children from families that are having the most constant money worries are being given a one-hour lesson from a PSHE [personal social health and economic] teacher who may not be trained in the subject.”

“For many teachers [reluctance to teach finance is down to] a lack of confidence about how to teach something which they think they’re not good at themselves,” explained Caroline Edwards, financial capability lead at the bank.

Not all resources are created equally, however, and experts such as Davies warned that having materials but no guidance on how to use them made deciding what to teach difficult sometimes. “We need to mark the quality of these products,” she said.

That, in part, is why the FT created its own charity last year, the Financial Literacy and Inclusion Campaign, to share access to trusted financial education.

“A crucial element of financial literacy for young people is the ability to recognise when they are being marketed to. Financial education should be for everyone, not just potential clients,” said Allam of FLIC.

A lack of financial literacy can deepen inequalities as wealthier households tend to have more time and resource to teach children about money, according to a survey by financial advisers. Research by St James’s Place found that teenagers from more affluent background scored more highly in financial literacy tests than their peers from households with lower earnings.

While working as a teacher, Tom Harbour was struck by the influence of background on education, and founded the charity Learning With Parents to help families learn about school subjects together.

“Schools are asked to do so much, they are the social workers, they are the core curriculum providers, and they are everything else,” he said. “Things like providing financial literacy are always going to fall down the list.”

“When we are young, it’s very easy to think we’re going to have this money, and keep getting it,” said Foad Hussein, who saves 75 per cent of money from his parents and part-time work, in anticipation of becoming financially independent himself.

“But . . . it’s not going to be like that forever. You’re going to have to start paying for stuff soon, and it’s going to hit when you move out.”

Knowing about money is less urgent than making it / From Caitlin Kelly, Tarrytown, NY, US 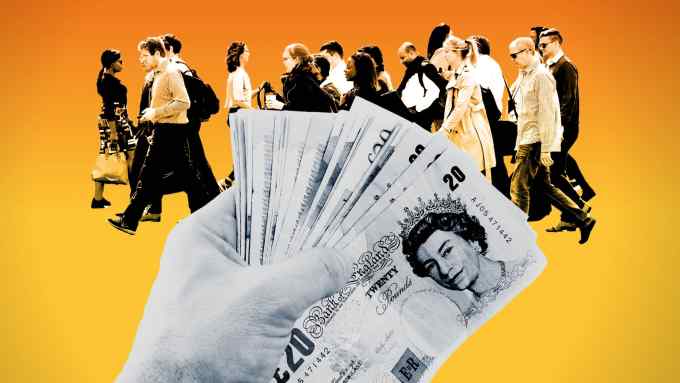