How to rethink your way to an open mind

Conversation with Adam Grant is peppered with what he and his students call “ahas” — to denote “eureka” moments and insights.

A small but potentially significant “aha” occurs at the end of our videocall, when he is talking about how to improve online meetings. Instead of the standard automated invitation to rate sound and video quality, “as an organisational psychologist . . . I would give people a one or two-question survey,” he says. “Was this a productive or effective meeting?” Pretty soon, organisations would have usable data about when to schedule calls for the best outcomes, and with whom.

It is an example in miniature of the challenges that motivate Prof Grant and of his tireless drive to collect evidence that might solve them.

At 39, the prolific Wharton business school star is already one of the most sought-after thinkers and speakers about what makes organisations and the people in them tick.

His books include the breakthrough 2013 bestseller Give and Take, about the unexpected returns from being a nice guy (which everyone seems to agree he is). In Option B, published in 2017, he and his friend Sheryl Sandberg, Facebook’s chief operating officer, who was recovering from the recent sudden death of her husband, combined to write about how to respond to shattering blows.

Think Again, his latest book, is a thought-provoking exploration about provoking thought. It mines research into how to encourage open-mindedness and arrive at better results by regularly re-examining assumptions.

In it, Prof Grant dismantles some trivial beliefs. Take the familiar “boiling frog” metaphor. It suggests we submit to slow transitions because we don’t notice them, but jump away from abrupt change like frogs dropped into hot water. In fact, Think Again reminds us, frogs also leap out if the pot gradually heats up. More importantly, he also addresses how to change the dangerous assumptions that underpin racism and political partisanship.

The past year has provided plenty of food for rethought, so which assumptions has Prof Grant himself revisited?

One is the idea of remote work. He has always been as comfortable working from home in Philadelphia as on campus at the University of Pennsylvania’s Wharton business school, if not more so. (He acknowledges the support of his wife in helping look after their three children.) But based on research showing that Americans now expect to work only one or two days from home per week, he thinks companies planning to move permanently to fully remote work are “overcorrecting”.

The Big Read
Where’s the spark? How lockdown caused a creativity crisis His own experience as a teacher also points in the direction of a mixture of in-person and online work as the more productive, and more agreeable option. “How many times have I been in a conversation [online] or especially doing a virtual keynote and just felt like I’m talking into a black hole? I sometimes feel like the first law of thermodynamics is being violated,” he says.

That said, he and his students have turned the online chat-box into a useful tool. They use hashtags to improve the discussion: #debate signals when someone wants to disagree; #onfire means they cannot wait to comment or question; and #aha highlights those eureka moments. Prof Grant says this has encouraged more students to participate. The system also shows him where he needs to raise his own game, to generate more #ahas. It is a small innovation he hopes to carry over into the hybrid world of work.

The killing of George Floyd last year and the subsequent Black Lives Matter protests provoked another rethink. Prof Grant, once diffident about commenting on race, blogged in June about anti-racism, flagging how research had shown that “when majority groups stay quiet, they inadvertently license the oppression of marginalised groups”. Groups “with power and privilege”, such as white men, “actually have an easier time getting heard” about racism and sexism, he wrote. His failure to condemn the status quo, though, triggered a backlash. “I think I implicitly legitimated the fact that it is hard for members of minority groups or marginalised groups to speak up on these issues, as opposed to calling that out,” he says. Now he acts on the presumption that not everyone knows the context of his work.

Writing the book has also made him recognise his inclination to slip out of the “scientist mode” of openness, and into “prosecutor” mode, relying on evidence to attack the other side.

These look like intellectual games, but Prof Grant is adamant such techniques can be the key to resolving deep divisions. The book was completed before the US elections and their violent and contentious aftermath, but Donald Trump — fount of many unexamined assumptions and a lightning rod for many more — looms over the project.

Still, much of his work is about how to patch up aggressive divisions that scar modern politics. “I don’t expect to steer the direction of people’s rethinking right . . . I want people to think more scientifically. I think we would all make wiser choices, and probably have better conversations about polarising issues, if we could do that,” he says.

InterviewManagement
In times of crisis, we need to be more resilient 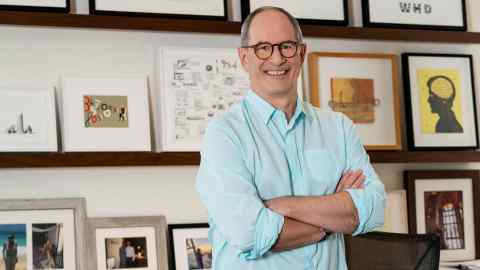 Better discussions would ensue if people aimed for “confident humility”, which Prof Grant describes in Think Again as “having faith in our capability while appreciating that we may not have the right solution or even be addressing the right problem”.

The continuing pandemic is also likely to highlight Option B’s insights into resilience. “I’d say we’re all living some form of option B,” says Prof Grant. He expects that a significant minority of people will suffer post-traumatic stress disorder. But a far larger group, evidence suggests, will report the opposite effect: post-traumatic growth. “No one is saying, ‘I’m glad this happened. My life is better because of this horrible experience.’ What they’re saying is, ‘I wish it didn’t happen. I would undo it if I could, but I can’t. And knowing that I’m stuck with this hardship, my life is better in some specific ways.’”

As a result, many of us will be rethinking our lives and considering making dramatic changes. Prof Grant does not discourage such self-examination and he has seen no evidence for the common advice you should not take big decisions immediately after bereavement. On the other hand, “the middle of a major upheaval to the way that we live and work” may not be the ideal moment to lock in irreversible changes. Adopting scientist mode, Prof Grant adds: “I guess what I’d say is maybe [this is] not the best time to make a commitment, but the perfect time to run an experiment.”