Sign up to myFT Daily Digest to be the first to know about Film news.

As soon as I left the cinema after Star Wars: The Force Awakens, a star war scarcely less momentous started up in my film critic’s brain. “I think it should be four stars,” said one hemisphere. “No, three stars,” said the other. “Why? It’s a spectacular, dramatic and entertaining film,” argued H1. H2: “Yes, but it’s basically One Damn Thing After Another.” H1: “Well, aren’t they all?” H2: “Aha! Is that your case? Then there is validation, is there” — turning to the jury — “in common cause catchpenniness and lowest-denominator derring-do?”

Well, no. There isn’t. So it’s three stars. But let me say this. I enjoyed the seventh Star Wars film more than any since The Empire Strikes Back and much more than — yes, reader, I was there, for this newspaper, reviewing it — the now 38-year-old saga start-up. I even remember (shimmer and lap-dissolve) the Ivy Restaurant press luncheon afterwards. During it Sir Alec Guinness, seated at my table, cast a censorious glance at my asking R2-D2 (Kenny Baker) if I could have the rest of his uneaten main course. I had it. The moral: when two or more dimensions are gathered together after a historic (to-be) film screening, Manicheism parochial recapitulates Manicheism aetiological.

So I know my Star Wars. Its two strengths have always been spectacle and fun. Spectacle, fun and a wild interplanetary heroism. Three strengths. And its weaknesses have always been kindergarten mythmaking, boy-scout ethics and a nearly certifiable obsession with parenthood. “You are my father”; “You are my son.” We get that in the new film. It provides an electrifying moment late on — the film’s best scene — but it seems, like much of Star Wars: The Force Awakens, a reinvocation, a re-litanising, of what went before: an echoing sometimes suspiciously more (to the suspicious) like the ringing of the cash register than the tolling of a mythic imperative. 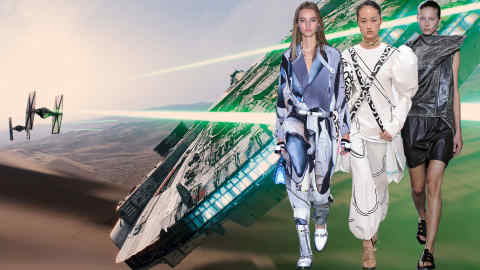 Yet there is so much good in JJ Abrams’ direction and script, co-written with Michael Arndt and Lawrence Kasdan. He gives the Millennium Falcon, decaying in a scavengers’ desert, a thrilling resurrection and aerial workout. He strews the landscapes, and tavern-ish scenes at a picturesque brigands’ castle on Planet Somewhere, with mutants and monsters in best Lucas tradition. I loved the unclassifiable pachyderm slopping water at a trough, and the wrinkled visionary crone with a face like a sliced butternut squash. It is wonderful too to have Harrison Ford bringing Homeric heft, and humour, to the older Han Solo. He is the triumph of the casting, closely followed by Adam Driver as warrior prince to the baddies, a victim of moral torment with a touch of Milton’s Satan. His long, gothic-Byronic features and de profundis baritone give ballast to the last reel’s speech-ballooning comic book escapades.

But — and there always is one — what exactly is it we are watching? Is it any more, in substance, than “this bit’s fun” and “that bit isn’t”? A teasing quest objective (no spoilers) just about gives direction to this movie’s plot. But I spy no longer-range story destination for Disney’s Star Wars reboot, apart from more clusters of baddies going up against more clusters of goodies.

How the FT reviewed Star Wars in 1977

The goodies are fronted by two new leads, both British unknowns, who need more detail and finish. Daisy Ridley cuts a fetching figure as a striding scavenger heroine, bearing a staff and dressed in pleats like a thrift-shop Artemis. But five minutes after seeing the film I couldn’t remember her face or voice. Black actor John Boyega, who has been trolled by imbeciles for extending the saga’s racial acoustic (no one remember Billy Dee Williams?), is likeable, open-featured and puppyishly hyperactive. But even he wilts, like a flower in excess sunlight, in the presence of Ford, who wipes competition with a single look or a one-liner. There was a small cheer for Carrie Fisher’s first appearance as “General” Leia. She plucks old-timers’ heartstrings and bats still-pretty eyes. But she seems, here, to be acting on an energy-saving bulb.

What troubles most is that Star Wars is starting to look like every other franchise epic. Is that the cost of anything-is-possible stories set in elastic universes? I kept having flashes of The Hunger Games and The Lord of the Rings. The characters costumed in quasi-timeless garb (neo-Grecian the favourite). The PlayStation plots with their gauntlets of danger and games of survival. The weirdos and wackos wall-to-wall in the supporting cast. And the sense that in our gaming generation a “next level” awaits, eternally or recurringly, in the spiralling cycle of good versus evil: though we feel more and more that the next level is anything an anxious film industry can think up to keep audiences on the existing level of emptying their pockets whenever The Movie Force requires.