We’ll send you a myFT Daily Digest email rounding up the latest Sweden news every morning.

Sweden’s unique strategy to deal with coronavirus will ensure it has only a small second wave of cases unlike other countries that could be forced to return to lockdown, according to the architect of the contentious policy.

Anders Tegnell, Sweden’s state epidemiologist who devised the no-lockdown approach, estimated that 40 per cent of people in the capital, Stockholm, would be immune to Covid-19 by the end of May, giving the country an advantage against a virus that “we’re going to have to live with for a very long time”.

“In the autumn there will be a second wave. Sweden will have a high level of immunity and the number of cases will probably be quite low,” Mr Tegnell told the Financial Times. “But Finland will have a very low level of immunity. Will Finland have to go into a complete lockdown again?”

Sweden and Mr Tegnell are under the global spotlight as their response to the pandemic has made them a global outlier.

Primary and secondary schools, restaurants, cafés and shops are mostly open as normal in Sweden, with health authorities relying on voluntary social distancing and people opting to work from home. Schools for over-16s and universities are closed and gatherings of more than 50 people are banned, but it is still the most relaxed approach of any EU country.

Sweden’s virus-related death toll on Thursday reached 3,040. This is significantly higher than Nordic neighbours Denmark, Norway and Finland, which have registered fewer than 1,000 between them.

Mr Tegnell said it would take about one to two years to know whose strategy had worked best and at what cost to society. He stressed that Sweden’s approach was to look at the “wide public health matter” in which an important consideration was that “people should be able to keep a reasonably normal life”.

The epidemiologist has become something of a cult figure in Sweden, with reports of people having tattoos done of him.

Public trust in Sweden’s public health agency has increased during the crisis, which Mr Tegnell in part attributed to his efforts to communicate openly, “answering the same questions hundreds of times”. He said he found the attention on himself “rather absurd”, such as his daughters “laughing hilariously” about a fashion magazine analysing his dress sense.

Mr Tegnell argued that “nothing [to do with lockdowns] had a scientific basis”, particularly decisions to close schools, because there was no evidence that children were a major cause of transmission.

He believes European leaders, fearful that their health systems would be overwhelmed, felt they needed to copy China’s approach, the first country to lock down because of the disease.

About a quarter of people in Stockholm had the virus at the start of May, according to a mathematical model by Sweden’s public health agency, which Mr Tegnell said was part of the reason the number of cases in the capital had fallen recently. By contrast, tests this week in Norway’s capital Oslo suggested that under 2 per cent of the population had been infected. 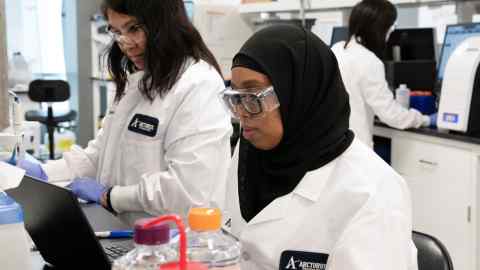 But Mr Tegnell said uncertainty about how long virus immunity would last meant it was unlikely Sweden would reach “herd immunity”, a level of the disease where so many people are infected — usually about 80 per cent — that it stops spreading. “I don’t think we or any country in the world will reach herd immunity in the sense that the disease goes away because I don’t think this is a disease that goes away,” he added.

Many countries’ hope is that they can keep the virus at bay until a vaccine is found. But Mr Tegnell said that, even in the best-case scenario, it was likely to take “years” to develop one, before it could be administered to an entire population.

“It’s a big mistake to sit down and say ‘we should just wait for a vaccine’. It will take much longer than we think. And in the end, we don’t know how good a vaccine it will be. It’s another reason to have a sustainable policy in place.”

Sweden’s approach has been to have a strategy that could last for months, if not years, without the need for big changes. That contrasts with nearly all other European countries, which are grappling with how to reopen their societies without sparking an increase in transmission.

This has led to some criticism from those who say Sweden should be trying much harder to curb the number of Covid-19 deaths. Per-capita death statistics show that Sweden is behind only the UK, Italy, Belgium and Spain at this stage of the pandemic.

One area where Sweden has done poorly is in trying to keep the virus out of care homes. Mr Tegnell, who suggests the higher infection rate in such homes in Sweden is the main reason why it has had more deaths than its neighbours, said: “It’s something that we deeply regret.”

He made the point that care homes in Sweden — like in the rest of the Nordic region — were for “the very old and the very sick”, as most elderly people live at home, and that there were known “quality problems” with care providers, often private companies.

“Unfortunately those quality problems have proven to make the elderly very vulnerable to infection,” Mr Tegnell said, adding that an investigation had begun.

Letter in response to this article:
Sweden deserves praise for no-lockdown strategy / From Margaret McGirr, Greenwich CT, US