Inside the spaces that care

In a recent TED Talk, designer Thomas Heatherwick discusses the ability of a building to mean something, to lift our spirits and connect us. “If I took us to a city, which bit would you like to go to – the old bit or the new bit?” he asks. The audience titters. Heatherwick throws his hands up: “You’ve given me my answer.”

Heatherwick argues that out of modernity has emerged an “epidemic of boringness” and has become one of a growing number designing with wellbeing as a priority. Boring buildings, he says, “aren’t just simplistic and monotonous: they’re bad for our mental health, our physical health and societal health.” Recent studies have linked “environmental deprivation” to conditions such as ADHD. Others have found correlations between bland architecture, crime and suicide rates. The new proposition is simple: rather than designing for functionality alone, architects should instead place value on “the function of emotion”.

In the early 1990s, Maggie Keswick Jencks pioneered the need for more nurturing spaces after her breast cancer returned. Left to process the diagnosis in a windowless corridor, she dreamt of a space where design, landscape and interiors were factored into a patient’s prognosis. The first Maggie’s centre, built to support those affected by cancer, opened a year after Jencks’s death in 1995, and has since been joined by 28 others. “Our buildings must look friendly. They must have clarity,” reads the architectural brief. They must not, however, be too cosy. “Having cancer is not something you can fix with comfy armchairs and cheerful paint.”

Cancer is not something you can fix with cheerful paint

Maggie’s spaces counteract feelings of anxiety with familiarity. “We’ve done that by creating a sense of domestic architecture,” says Laura Lee, Maggie’s CEO, pointing to kitchens, living rooms, fireplaces and kettles. “Things instinctively feel more human.” Another device is installing open-plan spaces to encourage movement and connectivity. (Heatherwick has used a similar technique in a learning hub in Singapore that removes corners and corridors.) The goal is to feel “safe but not alone”, a counterpoint to hospitals, “where things happen behind closed doors and there’s a sense of secrets”, explains Lee.

Connection to the natural world is also important. In a 2021 survey, 70 per cent of UK adults agreed that nature improves their mood. At the Maggie’s Centre in west London, Richard Rogers worked with landscape designer Dan Pearson to create a “woodland walk” of plane trees, evergreen bamboo and pink-stemmed birch. The leaves create dancing shadows that move with the sun. Many projects feature warm woods and reflective surfaces: materials that feel naturally cocooning.

Hospital Rooms commissions artworks for NHS mental-health units – highly managed spaces that require ligature-proof fittings, soft edges and hard, wipe-clean surfaces. The charity recently fitted 19 artworks at Springfield University Hospital, where a 15ft mural by Yinka Ilori is now joined by a Michelle Williams Gamaker collage and a Giotto-inspired atrium. Each work is the result of more than 120-plus workshops with the artists, staff and patients. “Making something that’s incredibly special, that could exist in a museum, can make you feel special in return,” says Hospital Rooms co-founder and artist Tim Shaw. “You want to feel held by the space.”

Last year London studio Projects Office designed a mental health unit for the Royal Hospital for Children and Young People in Edinburgh. But rather than embodying a domestic style like Maggie’s, the studio set about creating a “third space” – a “place with its own, unconventional identity”. “If the space felt domestic it could collude with [a] child’s anorexic state of mind – that [they weren’t] ill, just on holiday,” explains Projects Office director James Christian. Instead a coastal narrative is used, centering the space around a communal “lighthouse” that offers children privacy in the sightline of the staff office.

A Lucozade-orange lighthouse feels particularly at odds with the anodyne characteristics of regular health units, but new research supports the benefit of bright colours. “That sludgy green they insist on putting in hospitals is quite odd,” says Emma Pocock, co-founder of Turner Pocock. The interior-design studio’s charitable arm, TP Caring Spaces, works to improve underfunded spaces – community halls, recovery centres and nurses’ break rooms. “Bringing joy is my main aim,” says Pocock. A “really quite sad” playroom at a women’s shelter is transformed with pattern, colour and textured fabric. A Mencap staff room that was once “full of crap” is now decluttered and modern.

“The trick is to design works that balance opposing desires,” says Jonas Bjerre-Poulsen, a founding partner at Copenhagen-based Norm Architects. Opposites in interiors create distractions; they give people something to have an opinion on. Bjerre-Poulsen’s design for a dentist does this by balancing light and shadow – but it could be as simple as design agency Covet Noir’s mix of antique and contemporary furniture at a private health centre. Or the colourfully contrasting murals at Hospital Rooms’s Springfield project.

HTSIHow To Give It 2022
The playground project 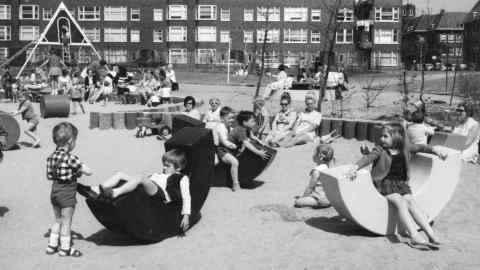 In the garden of the Frank Gehry-designed Maggie’s centre in Dundee is an Antony Gormley sculpture, a proud figure with a penis and geometric circular breasts. In recent years it’s become a popular site for men whose sense of masculinity has shifted as a result of hormone therapy. “It’s a beautiful piece of art, but also a conversation piece,” says Lee. At Christmas the centre decorates it with a hat and tinsel. Small gestures, but a familiar source of comfort nonetheless.