Investors are increasingly attracted to venture capital trusts, but be mindful of the risks

UK investors who find themselves “capped out” of pensions saving due to cumulative cuts to tax relief are increasingly turning to young, fast-growing companies to provide retirement income and investment growth — with major tax advantages attached.

Venture capital trusts (VCTs) offer investors a way to back some of the most exciting growth businesses in the UK — such as Secret Escapes, the luxury travel company, and Graze.com, the subscription snack company — with the advantage of upfront income tax relief of 30 per cent on a maximum investment of £200,000 per year. However, the tax rewards are to compensate for the higher risks.

VCTs are listed on the stock exchange and invest in a crop of fledging businesses in the UK.

In exchange for taking a risk on a group of early-stage companies that carry a higher chance of failure than other investments, investors receive significant tax advantages. As well as upfront income tax credits, investors do not have to pay capital gains tax when they sell shares, and will receive tax-free dividends — as long as they stay invested for more than five years. The returns can be impressive — but would-be investors must understand the risks and pay close attention to investment charges.

“For the right person, VCTs can be a useful component of a retirement income plan alongside Isas and pensions,” says Jason Hollands, managing director of Tilney Group, a wealth manager.

“This might surprise those unfamiliar with them, given their focus is on providing growth capital to smaller companies.”

Unlike other funds, VCTs do not take their income from the dividends of the companies they invest it. Instead, VCTs may create their own income by selling down stakes in maturing companies. “VCT dividends will often represent capital returns to shareholders structured as income,” says Mr Hollands.

And VCT yields — the income paid out in relation to the cost of shares — are typically high, especially when the upfront income tax relief is taken into account. The tax-free element of VCTs is also appealing for investors who are restricted from further pensions saving, have already maxed out their £20,000 annual Isa allowance and face the reduced dividend allowance of £2,000.

However, VCTs come with much higher risk than other forms of investments and are less liquid. Investors miss out on tax relief if they do not hold shares for five years and must buy newly issued shares to benefit. Early-stage companies are also more likely to fail and lose investors’ money.

Yet over the long term, many VCTs have delivered high returns to investors. Northern Venture Trust, a generalist VCT which invests across a wide range of companies and sectors including peer-to-peer finance company Lending Works, has returned 237.34 per cent on a share price total return basis over 10 years. Maven Income and Growth, another generalist VCT, has returned 242 per cent on the same basis.

By comparison, the FTSE All share has returned 117.28 per cent over the same period. However, VCT investors need to be mindful of the impact higher fees will have on their returns.

Tax
Should you invest in Britain’s ideas factory? 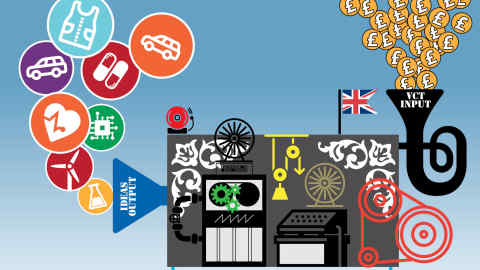 According to an analysis of data from the Association of Investment Companies last year, the broker Clubfinance calculated that the average annual ongoing charge for VCTs was just under 3 per cent — more than three times higher than that of the average actively managed equity fund. Including performance fees, annual charges can be as high as 8.6 per cent — plus upfront fees of 5 per cent are common.

VCT fund managers justify their charges as they are looking to invest in unlisted early stage companies through deals that are difficult to source and can take up to 12 months to complete. Managers tend to be much more “hands on” and will often sit on the boards of the smaller businesses they invest in, offering strategic advice.

In the last tax year, investors piled £728m into the VCT sector, the second-highest amount ever raised by VCTs since their inception and a 34 per cent increase on the £542m invested in VCTs in 2016-17.

The only year in which VCTs raised more was in 2005-6 when the government temporarily raised the level of upfront tax relief to 40 per cent, resulting in a surge of investment into the sector.

“The spike in inflows is perhaps not surprising when you consider the changes to pension legislation, restrictions on the lifetime allowance and to the buy-to-let market, all of which are altering the way people invest,” says Paul Latham, managing director of VCT firm Octopus Investments.

“As these areas become squeezed, people are increasingly looking to VCTs to provide them with a credible way of investing in a tax-efficient manner.”

Octopus Titan also broke records this year by raising £200m, the largest ever VCT fundraising. The VCT fund backs about 50 early-stage companies and has invested in some that are now household names including Zoopla Property Group and Secret Escapes.

The popularity of VCTs in recent years has meant that interested investors have had to move fast, and many funds have been oversubscribed.

Mr Latham says: ““Demand was such that this year many investors would have missed out on their first choice unless they acted early, with several opportunities closing ahead of the tax year end. Octopus Titan, the UK’s largest VCT, rapidly reached its initial fundraising target of £120m within just four months.

“We then offered an additional £80m of fundraising capacity, which attracted a huge amount of interest — so much so that we reached our target of £200m two weeks before the tax year end.”

While the performance of some funds has been impressive, new investors must also consider the impact that Brexit could have on the small UK companies that VCTs invest in.