US election: Nobody is talking about climate change

You would never guess it from the US election. But for the third year running the world is on course to exceed a record temperature in 2016 — having suffered the hottest July in history last month. People are right to worry their children may not have it as good as they did. Yet the changing planet plays little role in their foreboding. By any barometer, US politics has hit extreme weather in 2016, yet global warming ranks near the bottom on the list of voter concerns. Illegal immigration, on the other hand, is near the top, even though net inflows came to a halt five years ago. Is democracy on course to duck the biggest challenge of our age?

In the near future it surely will. It would be simplistic to lay all the blame on Donald Trump. The Republican nominee dismisses man-made global warming as a hoax concocted by China to increase its trade surplus with the US. He has also done more than any figure to demonise Hispanic immigrants.

Yet voter concerns would probably be little different if Mr Trump had not entered politics at all. Most of us encounter life through our day-to-day problems. Politics, like charity, begins at home. It is natural to worry more about your job security, or your family’s healthcare, than about the grander themes of our time. Questions of war and peace rarely alter US elections. Why should meteorology?

If you pause to think about it, the answer is obvious. Global warming is no longer just a documentary film by Al Gore. It is affecting our daily lives in a growing number of ways. Last month, America’s east coast suffered from an unusually long “heat dome” — summer temperatures so high the authorities in New York, Washington and elsewhere urged people to keep their children inside and stay well hydrated. My home in Washington was hit by two nights of electricity outage. The power company’s crew said they expected many more such cuts. Their underground cables were not designed to withstand so many days of daytime temperatures near 100F (38C).

People living in southern California, which has suffered from a rise in the ferocity of wildfires; Louisiana, which earlier this month was flooded by “once-in-a-thousand-year” rainfall; or large tracts of midwest America, where drought is no longer freakish, are feeling the anecdotal force of climate change. Westerners may find it hard to identify with people in the Gulf, where years of growing heat intensity threaten to make it uninhabitable. But they feel the impact when insurance rates shoot up in low-lying coastal areas, such as Florida, Alabama and even New Jersey.

Climate alarm is no longer a monopoly of environmentalists. Earlier this month, Zillow, an online property site, forecast that one in eight homes in Florida would be underwater by the end of the century. You might want to think twice about buying that beachfront home in Miami. The big reinsurance companies last month called on Washington to take urgent steps to stop catastrophe, which threatens to make nonsense of their risk models. Meanwhile, farmers in the midwest fret about the uncertainty of “extreme weather”. But can voters connect the dots? Will their experience of climate change translate into public action?

Robin Harding
Relax about robots but worry over climate change 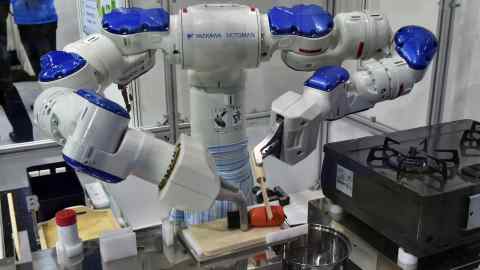 There are two big obstacles. The first is that voters increasingly distrust experts nowadays. Whether it is fear about the side-effects of vaccines on children, the impact of fluoride in drinking water, or climate change forecasts, scepticism about science has been rising in the past few years. There is no way most people will ever have the time, or the education, to understand climate science. If we distrust those who do, we will not hear what they say. Scientists have consistently said that global warming will take place unevenly, unpredictably and by step-change rather than on a linear curve. That means next year may be less hot than this year. It will not mean that global warming is a hoax. Here is one prediction: next time it snows in Washington DC, several US senators will send tweets mocking global warming.

Second, people are afraid that doing something about global warming will make them poorer. Terms such as “carbon tax” imply a higher cost of living. This makes the politics very hard. To avoid the word tax, governments have resorted to far less efficient remedies such as cap and trade schemes, which are floundering in Europe, California and elsewhere, since they are run by bureaucrats and vulnerable to lobbying. It would be far better to let the market decide how to cut emissions by putting a price on carbon. In theory, the solution is easy. For every dollar raised from carbon, we should receive a dollar in tax cuts — or better still, have it rebated in our tax returns. The purpose should not be to raise money but to cut emissions.

Will the 2016 election make any difference? Forecasting short-term politics is harder than long-term weather. But it is safe to say the hidden costs of climate change — the federal disaster relief, higher insurance rates, bigger levees and so on — will only grow. Most global risk warnings for 2016 put a Trump win high on their lists. We will know about that soon enough. By contrast, it could take years before the public reaches a verdict on global warming, by which time we may be reaping the whirlwind.

Get alerts on US immigration when a new story is published