A love of nature, knit together, to combat climate change

“Climate change is the investment opportunity of our generation,” said Mark Carney, the former governor of the Bank of England, in a recent FT report highlighting Wall Street’s new “green is good” mantra. The world of finance and wealth management has been slow to respond to the impact of climate change but those in the arts – artisans, photographers and designers – have been much more adept in leveraging their talents to highlight the global environmental challenges we now face. Icelandic explorer and photojournalist Ragnar Axelsson’s recent collaboration with British fashion designer Christopher Raeburn – his graphic imagery documenting the disappearing Arctic transformed into a print by Raeburn – is one such example.

Axelsson, the author of Faces of the North (2016), Glacier (2018) and the new Arctic Heroes, has been documenting life in the Arctic for more than 40 years. His work has taken him from Latvia and Mozambique to China and Ukraine, and his photographs have appeared in Time, Newsweek and National Geographic, as well as in international exhibitions; there is currently a showcase of his photographs in Iceland’s Reykjavik Art Museum. Axelsson’s mission, expressed through striking black-and-white images, is to capture the relationships between people and their extreme environments against a backdrop of complex and unprecedented climate change.

“Way back, some 44 years ago now, I went to Africa to do documentary work because there were a lot of things happening there. But I felt like all the photographers in the world were on the same continent, taking the same pictures,” Axelsson says. “I decided to go in the opposite direction to the others, to a much colder place. Whether people liked it or not – and in the beginning I didn’t care – I just wanted to take the photographs. I was writing my own song.”

It is this sense of curiosity, storytelling and a desire to take the road less travelled that Axelsson shares with Raeburn. “I think it’s the same for Christopher,” he says. “He designs beautiful clothes the way he wants them to look. Christopher also designs from the heart.”

Raeburn, the founder/creative director of his own namesake brand and global creative director of the outdoorwear brand Timberland, has spent more than a decade challenging the industry and his peers with his own sustainability-focused business model of “Remade, Reduced & Recycled”. The London-based designer has explored innovations in textiles, while curating an archive of repurposed materials, ranging from silk and rayon second-world-war maps to upcycled anti-gravity suits once worn by aviators and astronauts. “I think, if anything, I’m a creative entrepreneur more than a fashion designer – and I’m certainly not an environmental activist,” he says. “When I left the Royal College of Art and started my own company, I realised the obligation I had, and the responsibility that came with that – to ensure my work would hopefully inspire the next generation, and that we were aiming to do the right thing.”

Raeburn first saw Axelsson’s work in a magazine in 2013. “It was a small article with a single black-and-white picture explaining that a show was being presented in a small gallery in Chelsea,” he recalls. “A lot of the work I do is around archaeology and curiosity and going out and trying to find things. Quite often the trail leads to disappointment – but this exhibition was different. It opened my eyes to the world of Ragnar; it was totally immersive. I wanted to know more, so I bought his book at the gallery and, as I was travelling back home, I decided to do something in my own work that could be a part of this in some way.”

Raeburn’s autumn/winter 2014 menswear collection was in dialogue with that 2013 exhibition. “With Last Days of the Arctic, I was looking at original Arctic seal-gut parkas using a lightweight Japanese material with drawstrings. It was a completely modern interpretation of those parkas, which are seen in museums around the world,” Raeburn says, taking out his camera and flicking through pictures of the collection on screen. “The way that we work within the remade aspect of Raeburn, once we’re inspired by a narrative, is to go out and find all of the artefacts that help to build out the whole story.”

The designer revisited Axelsson’s work for his autumn/winter ’20 collection. “Ragnar’s images challenge humanity to consider its actions and make positive changes before it’s too late,” he says of his inspiration. He used Axelsson’s original full-colour images throughout the collection, printing them onto 100 per cent recycled cotton-feel polyesters and silk habutai. As such, the collection maximises the impact of Axelsson’s portraits of fragmented glaciers, bearing witness to the immediate threat of global warming but also celebrating the natural beauty of the Arctic.

Global adventures to quicken the pulse and stir the soul
Cold spray: the zen of Arctic surfing 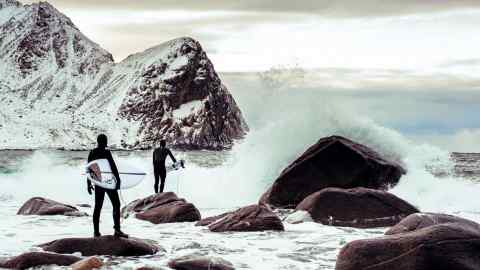 “I think there is an interesting conversation around accessibility, education and inspiration – and playfulness,” he says. “Ragnar’s photography and his recent book Arctic Heroes, which recounts the story of sled dogs by Greenland hunters... I suppose that’s what we’ve tried to do with elements of our work. It’s about teaching craft and creativity – and about empowering future generations, and those who have become slightly detached from creativity.”

Despite the intense synergy in the pair’s work, they have never met in person. Conducting their main correspondence via social media and email, they share their experiences from different countries but have cemented a partnership that is set to continue. “We’re really pleased with the latest collaboration and we’re looking forward to the possibility of doing something in the future,” Axelsson says. Watch this space.