Adeline Ooi, the effervescent and stylish director of Art Basel Hong Kong, has not been sleeping well. “I’ve been waking up at four in the morning for about 10 days now,” she tells me at the start of this year’s event, the seventh edition of Asia’s leading art fair, which opened yesterday. She has been nervous in part about the opening press conference, which is more formal and camera-heavy than at other such events on the circuit. But also, she says, she has been thinking a great deal about the Asian art scene and “how to do right by the region”.

“I have always seen my priority as two-fold,” she explains. “We are building bridges between the east and the west, but also [within] Asia. It is a large continent — I see it stretching from Turkey to Australia. And it is very fragmented, with different languages and different histories.”

Combining it all into something authentic is, she says, “a wrestle”. But to those on the outside, Art Basel Hong Kong — which aims for equal representation of galleries from the east and west — strikes a decent balance between being part of the Swiss-run art fair empire and an experience unique to the international territory of Hong Kong.

Originally from northern Malaysia and the daughter of a palm oil plantation manager, Ooi didn’t have the obvious makings of an art market heavyweight. “I wasn’t exposed to art at all,” she says. “The closest I can get is that I remember there were pictures by Van Gogh on the back of Reader’s Digest magazines that I cut out and stuck on my bedroom walls.”

She spent her teenage years at school in Singapore and knew only that she definitely didn’t want to work in an office. So, she went to art school, leaving Singapore for London’s Central Saint Martins.

From there, Ooi went to work for Valentine Willie Fine Art gallery in Kuala Lumpur, then spent time as a curator and art adviser before joining Art Basel in 2013 as its VIP relations manager for south-east Asia. She was appointed to the top spot ahead of the fair’s 2015 Hong Kong edition, replacing Magnus Renfrew, who had founded the fair as ArtHK in 2008.

Ooi, 42, admits to having been “in at the deep end” when she started, not having run an art fair before, but says she relishes the challenge. “I complain a lot about living on an aeroplane, but when you visit a gallery and see their artists and hear the individual stories, it’s truly inspiring.”

Her personal highlights at this year’s edition reflect a curious mind: they are all artists she describes as “unsung heroes” in the Insights sector of the fair, which is focused on Asia. These include Zarina, born in India in 1937, whose delicate monochrome prints are on the booth of New Delhi’s Gallery Espace ($12,500-$100,000), and the painter Cheong Soo Pieng (1917-83), a pioneer of Singapore’s Modern art scene, at the Asia Art Center ($40,000-$185,000).

Right now, Ooi is particularly enthused by a re-emerging scene in Bangkok. She cites two Thai artists in the Encounters section of the fair, which is for large-scale works: Mit Jai Inn (b. 1960), co-founder of the Chiang Mai Social Installation arts festival, and Pinaree Sanpitak (b. 1961), an artist who Ooi showed when she was at Valentine Willie gallery.

She believes the fair reflects the fact that taste across the region has “matured” since she began. “Frustrations were different then. Exhibitors [from the west] weren’t sure how to communicate with Asians; some thought they should bring big, red paintings to suit local taste.” Now, she says, “the quality of works throughout [the art fair] is much stronger.”

Ooi talks quickly and appears to be very in-the-moment — it’s difficult to get her to dwell for long on the four previous editions of Art Basel Hong Kong she has run, or to define her vision of the fair’s future. But we meet in the thick of the event, which she says takes a year to organise, though it runs for only five days — so perhaps now is not the best time for perspective. “Everything is so intense and emotional,” she says.

One concern in the run-up to this year’s event had been China’s economy, which began to slow last year on the back of mounting public and private debt and tense trade relations with the US. Ooi describes herself as “realistic but optimistic” on this front. “We live in sombre times,” she says, “but galleries are not closing down, collectors are still buying and around town it seems that everyone is here. Just look around, this is the week that Hong Kong lights up for the rest of the world.” 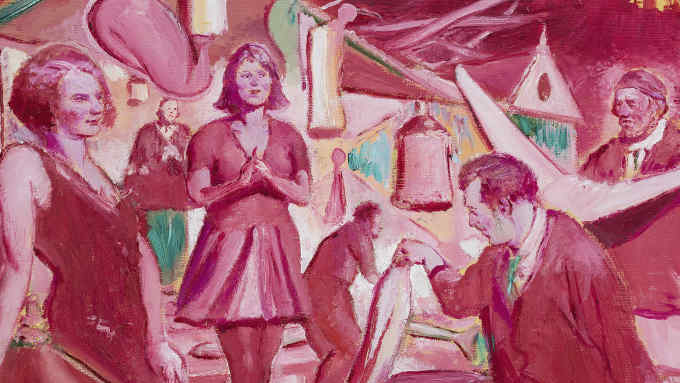