In the era of avocado sourdough toast and coconut chia seed pudding, the yeast extract Marmite makes for an underwhelming breakfast to post on your social media account.

But last year, the brand scored a viral hit with its TasteFace app, which invites people to try the spread and then uses facial recognition technology to rate their reaction. It then spits out a customisable “love it or hate it” image, reusing the company’s popular marketing slogan, for them to share with their followers.

AnalogFolk was the creative agency behind the success. Through a focus on building campaigns specifically for digital devices — for people to interact with on platforms such as Snapchat and Instagram via their smartphone — in a decade AnalogFolk has gone from a studio in east London to six offices worldwide. In the meantime, it has worked for some of big global brands, including Nike, Booking.com and Nandos.

The focus on putting data and technology first, rather than focusing on traditional media with digital as an afterthought, has helped AnalogFolk win clients from some of the clunkier big agencies.

The company managed a compound annual growth rate in revenue of 57 per cent between 2013 and 2016. AnalogFolk has been recognised in the inaugural FT Future 100 UK as an “all-rounder”, meaning it impressed judges across the categories of disruption, diversity and environmental, social and governance impact.

Ramping up has meant growing pains, however. In a tiny room buried in the bowels of a slick office in Clerkenwell, co-founder Bill Brock recalls the mistakes the company has made, including letting a lack of diversity build up.

“The first three years you’re running on instinct and fuel — passion fuel — the next three years you’re scaling, and then the last four years you’re catching up with yourself and trying to put in place a rationale as to why you want to be not just a successful company but also a mindful contributor to wider society.”

Mr Brock muses that while he is good at sales — not necessarily a surprise for a snappily dressed, confident American founder in the ad industry — and working with clients, his approach to the company’s product and its people “was by instinct rather than by plan”. A lack of a formal HR process in AnalogFolk’s early days meant “we didn’t have a lot of diversity in the company, because our industry isn’t great at that”, he adds.

“You’re growing quickly, you’re interviewing people, you look up one day . . . and you’ve got a lot of white guys,” Mr Brock says. “You stop and look back and go . . . we could be doing a whole lot of stuff a lot better.”

One of the greatest causes of start-up failure is an absence of management and leadership, says Ann Francke, chief executive of the Chartered Management Institute.

You’re growing quickly, you look up one day . . . and you’ve got a lot of white guys

“Founders tend to want to do everything themselves,” she says. “They can have real issues recognising their own shortcomings and hiring in people to fill those gaps. They tend to want to hire in people who look just like them . . . The ones that scale up are the ones that do recognise the problem.”

In its London office, AnalogFolk partnered with organisations such as Creative Equals and the Creative Mentor Network to help boost diversity in the advertising industry — and broaden its pool of recruits.

The business also funds an accelerator programme for senior women in the agency, paying for tailored training to ease their path up the ranks, and participates in a cross-industry mentoring scheme designed to connect junior people from black, Asian and minority ethnic (BAME) or lower socio-economic backgrounds with people at the top.

Much of the drive for the initiatives has come from Ete Davies, managing director of the London office, who was hired to fill the gap in Mr Brock’s skills. Mr Davies joined the company around three-and-a-half years ago when AnalogFolk was at a transitional stage, growing from a start-up of about 40 people in London to closer to 100. He has helped introduce some more structure to the business, and, as someone from a BAME background, has also brought a fresh emphasis on the company’s diversity policies.

“There’s a point early on in a business’s lifetime where you have to be opportunistic,” Mr Davies says. “It’s been a mindshift in the last three years to be a bit more directive about where we’re going.”

“We’ve had hard targets since 2015,” says Mr Davies. “Having a target means that everyone focuses on it and it becomes a strategic objective. You put plans in place not just to hit the target but for how you deliver it, and the benefits go back to the business.”

Mr Brock acknowledges there is still plenty to do — particularly in AnalogFolk’s newer offices outside the UK, where growth is now fastest. While lessons have been learnt at home, some errors are being repeated overseas.

“We’re not doing a good enough job,” he says. The pace of recruitment is fast, and it is hard to keep up with the sort of policies it took time to introduce in AnalogFolk’s domestic market. “We’re where we were four years ago in London,” Mr Brock says.

But he is confident the rest of the business will catch up. Putting growth first is “not so much a mistake, as a compromise”, he says. 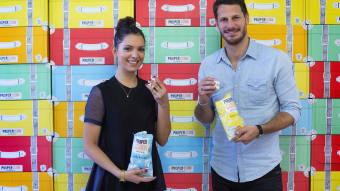