Early on most Saturday mornings in Manhattan’s Upper West Side, dozens of New Yorkers head to a small fitness studio, where the only thing heard over the roar of the treadmills and the music’s pounding base is the Barry’s Bootcamp instructor urging them to sprint faster and lift harder. Wait lists are typical to get a spot in one of these pre-brunch classes.

But the red lights in the 70 Barry’s outposts in the US, UK and parts of Europe are no longer shining on the sweaty bodies that normally pack its studios. Like spin class chains SoulCycle and Flywheel and high-end gym operator Equinox, Barry’s had sought to tempt customers put off by the coronavirus by slashing class sizes and cleaning equipment more frequently.

Many had tried to keep operating, even after President Donald Trump declared a national emergency in the US and countries across Europe stepped up measures to curb the pandemic. Now government mandates have prompted all four companies to close locations.

Like businesses across the world grappling with the fallout, fitness chains are struggling as consumers are forced into social distancing — with the pain being felt most acutely by several highly indebted groups. Investors are already betting on a shift to at-home workouts, sending the shares of indoor cycling equipment maker Peloton soaring from its lows this week. On Tuesday its stock was up more than a fifth from its closing price on Friday.

The increased focus on health and wellness over the past decade helped even small fitness brands secure venture capital funding and enthusiasm from Wall Street, with global spending on fitness climbing to $94bn in 2018, according to the International Health, Racquet & Sportsclub Association. Peloton debuted on public markets last year with a valuation of $8bn. Mirror, which makes virtual reality fitness equipment, notched a near-$300m valuation after it clinched a funding round with a Steve Cohen investment vehicle.

But many others binged on debt. The relative stability of annual gym memberships allowed companies such as Equinox, 24 Hour Fitness and New York Sports Club-owner Town Sports International to borrow heavily to fund expansion. Now, each is grappling with high debts and the prospect of a steep drop in revenues.

“There is no question that gyms, whether they are high-end or value-oriented gyms or boutique fitness players, will all suffer as long as coronavirus and the knock-on effects of it last,” said David Shiffman, who is co-head of investment bank PJ Solomon’s consumer retail practice. “If your customer doesn’t show up and you are leveraged it leads to financial stresses.”

Analysts at credit rating agency Moody’s said it was still too early to gauge the magnitude of the sales shortfall, given traditional gyms often require customers to sign annual contracts.

Some chains such as Equinox, which is owned by property developer Related and private equity firm L Catterton, have agreed to suspend memberships for those affected by a closure, foregoing tens of millions of dollars in monthly fees until its clubs reopen. That will heap pressure on its balance sheet, particularly given almost half the company’s $1.2bn annual revenue was generated in the New York area. The company had some $188m of cash on hand at the end of September to weather a downturn, S&P and Moody’s data showed.

Publicly traded fitness chains have also been hit. The shares of Town Sports have more than halved this year, and the gym operator is also facing pressure given it has a $178m loan due in November. Planet Fitness stock is down 56 per cent since the sell-off began in late February. Bonds issued by 24 Hour Fitness have tumbled to just 40 cents on the dollar, indicating severe financial distress.

There is little room to manoeuvre financially now.

“These are fairly fixed cost businesses,” said John Puchalla of Moody’s. “They can cut back on hours for employees but by and large there’s a lot of fixed cost in operating these clubs.”

Financial advisers expect several small and midsized gyms to close if the pandemic lasts for months, and several cast doubt on the ability of equipment manufacturers such as Peloton, Mirror and Tonal to keep up with a possible surge of demand given the potential difficulty in sourcing and delivering equipment. But some, including Mr Shiffman, noted the increased consumer appetite to stream workout classes on to a phone, laptop or television while gyms were closed.

Along with its indoor bicycles, Peloton also offers home workout classes through an app. This week it began offering free 90-day trials, a move rivals expected to bolster its membership.

“Peloton is winning,” said one boutique fitness executive in New York whose company is now contemplating job cuts. “They are probably loving this pandemic. Stay away from gyms. Get that workout from home.” 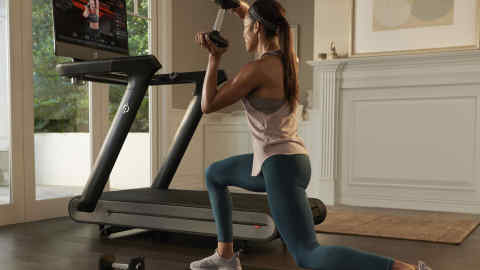 It is unclear how quickly people will return to their fitness routines once gyms begin to reopen or whether habits will change altogether. Rob Bailey, founder of a data automation company, froze his Manhattan gym membership last week after canvassing friends and reading scores of medical articles about whether it was safe to keep going.

“I bought some Bowflex weights so I can work out in my apartment, and I’ve been going for runs at off hours,” he said, adding that all of his Facebook friends agreed with a regimen that a week ago he had thought was overly cautious.

“There isn’t really anything that could convince me to go back to the gym until the coronavirus is over,” he added, admitting: “If we were having this conversation a month ago there would be a concern I had lost my marbles.”