The double threat of pandemic-related loan losses and persistent low interest rates has driven investors from bank stocks, leaving behind a small group of bulls who believe that the beaten-up sector is the best way to play the recovery from Covid-19.

According to Bank of America’s July global fund manager survey, a net 17 per cent said they were “underweight” banks, relative to their benchmark indices. That was the sixth straight month of bearish positioning, and marked a 10 percentage point decline from June — the biggest of any sector tracked by BofA.

Investors are spurning the sector despite historically low valuations, with many banks trading near the book value of their assets. Sector indices are down about 30 per cent even as the wider market returned to its pre-pandemic highs last week.

Meantime, short-sellers have made bets against certain US lenders. Bank OZK, a commercial real estate specialist, has been a target, with shorts now accounting for 9 per cent of the shares outstanding. Bearish positions in the card issuer Discover and subprime auto lender Credit Acceptance have also risen.

Bank stocks are “as out of favour as you get”, said Mike Mayo, analyst at Wells Fargo. “Bank investors are feeling beat up, defeated and depressed.”

When interest rates fall, the yields that banks earn from adjustable-rate loans, from real estate to credit cards, generally drop faster than the banks’ cost of funds, because deposit rates are already approaching zero. The result is thinner margins.

Banks have also taken charges for tens of billions of dollars of likely Covid-19 related credit losses. While actual loan write-offs remain low for now, there are some ominous signs. “Criticised” commercial loans at US banks — classified for regulatory purposes at some risk of loss — rose 28 per cent between the first and second quarters, according to Morgan Stanley research.

Nonetheless, a group of investors is sticking with the sector, saying the sell-off has created opportunities for big gains when the recovery comes.

Patrick Kaser, who runs the large-cap value strategy at Brandywine Global Investment Management, a $60bn-in-assets manager, said he had as big a weighting in banks as he was allowed under client guidelines. Portfolios he manages are about 15 per cent banks, roughly five times the weighting of their benchmark indices. “That shows our conviction,” he said.

Mr Kaser said he favoured large banks such as Citigroup, JPMorgan Chase and BofA, which are buffered by income from investment banking and other sources. Credit risks, he believes, have already been priced in.

“Capital levels are so strong that even if the banks are wrong [about the scale of credit losses] they will be OK,” he said. “Banks are the best play if there is a vaccine. You will want to own banks rather than healthcare, because banks already price in a bad outcome.” 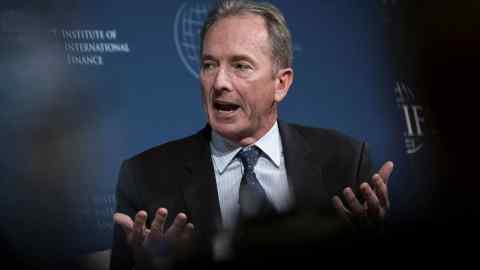 Anton Schutz, who manages a portfolio of mostly small banks for Mendon Capital, agreed that in the event of a vaccine, “there is no better return available to you than banks”. He expects that the period after crisis will bring both a wave of mergers among hard-hit smaller lenders and big falls in expenses across the industry, as customers’ adoption of digital services opens the way for branch closures.

News that Warren Buffett’s Berkshire Hathaway had sold more than $6n in shares of JPMorgan and Wells Fargo in the second quarter, as well as reducing positions in other banks, made waves this month. Less noticed, though, was a $2bn increase in Berkshire’s position in BofA since the end of the quarter.

Another well-known investment house — Soros Fund Management — has been topping up its bank holdings. The asset manager added positions in BofA, Citi and Morgan Stanley worth $88m in the second quarter.

Chris Davis of Davis Funds has long argued that investors have underestimated the improvement in banks’ durability since the 2008-09 financial crisis.

“We absolutely are sticking with [that] thesis,” he said. “The banks have been out in front during this crisis, working . . . to keep the system liquid, provide credit, and help the economy through this. Their balance sheets are strong, their reserve levels reasonable, and their liquidity excellent. The only thing about the banks that looks like the financial crisis is their stock prices.”

Video: Welcome to the 'everything rally'
Reuse this content (opens in new window) CommentsJump to comments section