How Ellen Pao lost a lawsuit, but won a hearing

In the middle of a packed coffee shop on one of San Francisco’s busiest streets, Ellen Pao attracts little attention. She has arrived alone, dressed in the understated jacket and trousers that are common West Coast attire.

But if the people crowding into the café do not appear to recognise her, most would probably know her name. Ms Pao’s failed attempt to sue Silicon Valley venture capital firm Kleiner Perkins remains one of the most high profile gender discrimination cases the US has ever witnessed.

When she lost her case in 2015 it seemed like the end of the story. But less than four years on, in the wake of the #MeToo movement, Silicon Valley has begun to view its stubborn lack of diversity in a different light. So has Ms Pao. As chief executive of non-profit Project Include she now works with investors and companies to address bias in the workplace.

“I do want to show people that I have gone through an experience that no one wants to go through,” she says. “You can do it and get to the other side and continue to do positive things — just in a different way.”

The jury was not persuaded that Kleiner passed Ms Pao over for promotion because of her gender. She lost friends and a career along with the case. Yet it enabled her to make a new life in activism.

I was thinking: OK, if not me then who?

Her decision to sue is seen by some as an accomplishment in itself: in February she appeared on stage with US actress Jada Pinkett Smith at an annual women’s leadership event where she was applauded as the woman who had taken on the tech world.

If this all sounds uplifting it is only part of the story of the past few years. Ms Pao’s lawsuit and 2017 book, Reset: My Fight for Inclusion and Lasting Change, describe Kleiner as a workplace where women were excluded from work trips because male colleagues thought they might kill the buzz. Public interest in her discrimination case opened her life up to extensive, often critical, scrutiny. A brief stint as chief executive at Reddit where she was asked to change the company culture was heavily criticised.

ReviewGender politics
Silicon Valley and the limits of ‘leaning in’ 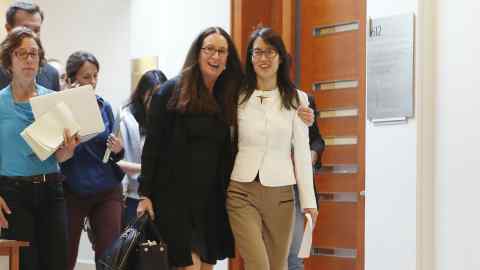 Whatever negative stories you may have heard of Ms Pao, rest assured she has heard them too.

“After Reddit I just thought ‘Urgh, how can you make a change? I don’t have the energy for it any more’ . . . But I felt like I had this opportunity and there were people who would listen to me and I can reach people.”

Trying to change anyone’s worldview is not easy, particularly if it leads to a situation in which they are less favoured. But Silicon Valley is as good a place as any to try to upend the status quo, she claims.

“Entrepreneurs and people who work at start-ups thrive on change and are super-flexible,” she says. “A developer once told me that any change needs to be repeated seven times before it becomes natural. I think that’s definitely the case with diversity and inclusion.”

Although unsuccessful, Ms Pao’s case seemed to have a ripple effect. Former Yahoo president Sue Decker wrote an essay for Recode, a technology website, on why it resonated with her. Two years later Susan Wojcicki, chief executive of YouTube, published an article in Vanity Fair describing the implicit biases and gender discrimination at work in Silicon Valley. Susan Fowler exposed a culture of sexism and harassment at Uber that led to a leadership overhaul.

Articles on diversity of any kind in Silicon Valley were less common when Ms Pao began her lawsuit. There were, however, many published about her life: the high salary, the past relationship with a married co-worker, the business successes and failures of her husband and his lawsuits for racial discrimination. The overall picture was of someone opportunistic and entitled.

The penalty for speaking out

Fine, she says, leaning forward in her chair. Being “entitled” is what gave her the confidence to sue. She points to some other factors behind her decision: she had financial resources and her family life was settled. “I felt like financially that I could afford to do it and my family supported me. And I was thinking OK, if not me then who?”

Yet, while Ms Pao says she does not regret her decision, she is careful about recommending legal action to others. There is still a penalty in speaking out. “Some people say ‘I am worried about my career, my kids and whether I can get a job. And I’m like — you don’t want to do this and I’m giving you permission not to. Because it is not easy and the personal attacks are hard.”

Discrimination cases in the US are rare for a reason. In 2017’s Rights on Trial, author Ellen Berrey found that in nearly 2,000 US employment discrimination cases most were thrown out or settled, the cost of litigation and adversarial process proving too big a barrier for employees. Only 6 per cent of cases went to court. Two-thirds failed.

In search of practical answers

Aware of such barriers to speaking out, the seven co-founders of Project Include, including Erica Joy Baker, then at Slack, and Tracy Chou who was at Pinterest, formed a group. Frustrated by a flood of self-congratulation by companies that had undertaken brief unconscious bias training but changed little else, they set out to identify practical measures that really would make tech an industry where more people can succeed.

In an essay describing his experience with Project Include, Dustin Moskovitz, co-founder of Facebook and Asana, the project management software company, explained that he had assumed greater diversity could be achieved by being “warm and welcoming”. This passive approach turned out to be ineffective.

“The primary recommendation I have is to build a real program around it, with real resources and commitment,” he wrote.

His experience is borne out in data from Crunchbase, the venture capital directory, and investment database Pitchbook. Just 15 per cent of funding for US tech start-ups goes to teams with one or more female founder and less than 10 per cent of VCs are women. The numbers have plateaued in the past four years.

The upside is that investors and chief executives are now more interested in tackling this lack of diversity, says Ms Pao. The challenge is that they often do not hear about problems until too late. “The question is how do you find out about problems? People tend not to report problems because they do not trust companies to sort them out.” Thinking of new lines of communication that employees will trust is one of the ideas that Project Include is now working on.

For companies interested in examining their own lack of diversity, she recommends starting by looking around and asking whether factors like work hours, socialising or the way clients and colleagues are discussed exclude anyone. Go beyond diverse hires to think about the general workplace culture, she says.

“You can bring new people in but if you don’t have a place where they feel welcome then what’s the point?”

Video: Diversity with June Sarpong: how the workplace can work better for women
Reuse this content (opens in new window) CommentsJump to comments section