Politics in the spotlight at OVR: Miami Beach

It’s 2020, so forget the swimming pools, beach parties and glitzy art that usually come hand in hand with Art Basel’s end-of-year jamboree in Miami. What would have been the 19th edition of the fair is instead another Online Viewing Room (OVR: Miami Beach) — and offers art that reflects the tumultuous time.

This year’s divisive US election is very much present at an event that falls between the presidential vote and inauguration. President Trump, who at the time of writing had accepted a transition to president-elect Joe Biden though was still contesting his defeat, features prominently in a new work by the American artist Jim Shaw on the virtual booth of Simon Lee Gallery (“The Master Mason”, $75,000).

The uncomfortable history painting shows the president in masonic dress and surrounded by what Shaw describes as “enabling sycophants”, including Trump’s former adviser Steve Bannon. The president’s wife, Melania Trump, and his two ex-wives sit at the side of the canvas, one of a new body of dystopian political works on show at Lee’s gallery in London (Hope Against Hope, until January 16 2021).

Lee says that including the work for the Miami OVR feels particularly apt. Trump’s October 15 town hall was broadcast from the Pérez Art Museum Miami and, Lee says, “Miami is a place that seems symptomatic of Trump and his aesthetic — Mar-a-Lago isn’t far away — so it’s a good time to give the current politics a bit of a voice.” The reaction so far has been “incredibly positive from the liberal arts milieu, as you’d imagine”, he adds.

Bannon is also referenced in a new work by Jenny Holzer, “happening with Russia” ($425,000), shown on the fair’s OVR by Sprüth Magers gallery. The piece comprises 20 etched copper panels, each of which reproduces a released, redacted interview from the investigation into Russian interference in the 2016 US presidential election. These include words from Bannon, Trump’s son-in-law Jared Kushner, and the president’s aide Hope Hicks. The permanence of the metal plate engravings represent how “these documents are etched as wounds into the history of the American people”, the gallery says.

Garth Greenan Gallery shows 10 limited-edition sculptures by the late Native American artist James Luna, including a beaded and feathered cap, “Make Amerika Red Again” (2016, $35,000, edition of five), worn by Luna in a performance based around Trump’s election pledge to construct a wall on the border with Mexico. “The reference to ‘Red’ native people is deliberately loaded with the idea of the red and blue states that we’re so familiar with,” Greenan says.

Acquavella Galleries shows new works by Tom Sachs that use popular images in intentionally wobbly paintings — such as “American Flag” and “Airforce I” — to drive a political point home. Sachs has said of the works, which are also part of a solo show in the New York gallery until December 18 ($75,000-$250,000): “When I look at these paintings, to me they all speak about power. There is power in logos and power in good advertising.”

There is visual power too in pop images and in works with overt political messages, a necessary side-effect of online viewing, which doesn’t allow for the effects of scale that are possible in real life. “It is an inevitable challenge [to stand out] on a digital platform with a surfeit of 250 galleries and thousands of images. But some works can still really pop,” says Noah Horowitz, director of Art Basel for the Americas.

Given the dominance of American politics in the world just now, gallerists are also shining the spotlight on politically motivated works that carry renewed resonance — even without laying it on thick. “Certain images that you can only see through the lens of this year,” Horowitz says. These include Thomas Demand’s large-scale photograph of closely-knit voting booths, “Ballot” (2018, €140,000, edition of six, Esther Schipper gallery), which is “impossible to look at without thinking about what’s going on at the moment”, Horowitz says.

While the majority of artists and market professionals express relief that the end of the Trump presidency is in sight, there is also a sense that this has been just one part of a deeper and longer problem. Enduring socio-political issues within the US, in particular racism, are also addressed through several works on the Miami viewing room.

Jack Shainman Gallery features contemporary works — including Kerry James Marshall’s “Untitled (And, so . . . )” (2020), a commission for the cover of Vogue magazine in September (priced around $3m) — as well as a photograph from Gordon Parks’s painful “Segregation Story” series, “Outside Looking In, Mobile, Alabama”, taken for Life Magazine in 1956 but not printed until 2012, six years after Parks had died.

The American artist Nate Lowman uses the past to highlight the present in “Katrina” (2020, $300,000) on David Zwirner’s virtual booth. Lowman says of the painting, based on an eyewall graphic of the hurricane that devasted the poorest neighbourhoods of New Orleans 15 years ago, “The wanton disinterest expressed by both the Bush and Trump administrations in regard to addressing their respective catastrophes was eerily similar . . . The nature of culture is change. So to observe that the persistence of poverty and systemic racism have still gone substantially unchanged and unaddressed from 2005 — and before — to 2020 is appalling and confusing.”

Monika Sprüth, co-founder of Sprüth Magers gallery, makes a similar point through another Holzer work on view, a dark labradorite stone footstool with the artist’s notorious truism “Abuse of power comes as no surprise” (2015, $200,000, edition of six). The phrase, which Holzer first blasted into the public realm on a signboard on New York’s Times Square in 1982, was also the artist’s Twitter post on November 11, a day when Trump was repeatedly tweeting “We will win!”. Sprüth says “It is important to repeat some things over and over again. Unfortunately, they will probably be relevant as long as mankind exists.” 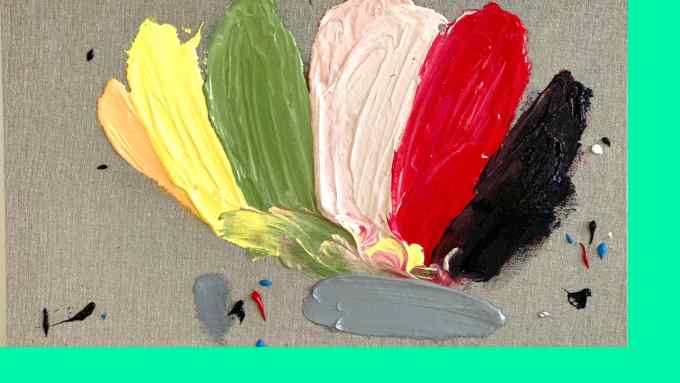