If you think the same, join us
Global adventures to quicken the pulse and stir the soul
See all 10 stories
How To Spend It Adventure holidays

At the end of 2019, Devi Kroell found herself zipped into a 5mm-thick wetsuit, carving through Arctic waves off a snow-covered beach in Lofoten, Norway. It’s not the usual pastime of a luxury-accessories designer based in New York. But since then, Kroell has returned twice to the north Nordic coast, squeezing in surfing trips between visits to the Italian artisan factories she works with. She’s invested in her own Firewire surfboard and Matuse wetsuit. “I am completely hooked,” she says. “Imagine, these photos were taken without filters.”

Despite growing up surrounded by the beach culture of south-east Asia, Austrian designer Kroell only recently felt the pull of the waves. She had an epiphany at the TriBeCa Film Festival while watching the premiere of Under an Arctic Sky – a documentary by Chris Burkard and Ben Weiland that follows six intrepid surfers in Iceland’s Hornstandir Nature Reserve. When a huge storm hits the country’s north coast, generating extraordinary waves in just-above-freezing water, the riders set out to surf the best barrels under the Northern Lights, surrounded by fjords and glaciers.

“I loved how they were braving the elements, clambering through snow and paddling through ice-blocks – and all under this incredible sky,” says Kroell, who swiftly researched surf camps and coaches. She came across a specialist operator called Go Surf and an instructor named Shannon Ainslie. Raised in East London, South Africa, Ainslie began surfing at age 13 and rose to pro level. He is a surf legend, having miraculously survived a double shark attack with a mauled hand (the footage now makes for compelling viewing on YouTube). On meeting Norwegian Kristian Breivik – a seasoned surfer and the founder of Frost Surfboards – he was convinced of the country’s potential and moved to Lofoten to set up a camp with him, while also coaching the Norwegian surf team. “It’s a relatively new sport in the region. In the summer there are 24 hours of sunlight and the area is starting to attract a lot of visitors, but in the winter it is hardcore,” says Ainslie. “The conditions are extreme and the storms can be brutal – but with that comes excellent waves.”

Conditions are extreme – but with that comes excellent waves”

For some, the lure of a challenge can override all. Kroell, who was going through the upheaval of divorce proceedings, was seeking a complete break. Her 10-day surf adventure taught her much more than hanging ten. “You surf for the two or three hours of light a day and the rest of the time, it is pitch-black,” she says. “For me, this was also a period for introversion, of sleep and tuning into myself. There is no surf scene in winter in Lofoten – just hot tubs, saunas and a few restaurants.”

Kroell stayed at one of a small clutch of red-and-yellow-painted fisherman’s cabin hotels in the port, and revelled in the quiet both in and out of the water. “There might be a few other surfers on the waves, but there are no line-ups; every wave is your wave, so you can really practise,” says Kroell, adding that freezing water on the face is better than cryotherapy. “I am fit and athletic, but the situation can be scary and foreign – and all while wearing a heavy wetsuit. It’s like an out-of-body experience, surrounded by snow-covered mountains, seals and towering rock faces.”

But even in the freezing conditions, learners can thrive, says Ainslie. “It takes a lifetime to master, but everyone can learn how to surf within a few days.” Devi had no experience but she was popping up on the board by the end of the first day. “The slowest part of the learning process for everyone is reading the waves and conditions.” Studying the surf is second nature to Ainslie, who is enamoured with his adopted Norwegian home. “There are beaches suitable for world-class surfers as well as for beginners. Of course it is unusual: most associate the sport with exotic locations. Yet facing your fears and getting out of your comfort zone can be good for the heart and mind.”

This is something Ainslie knows a thing or two about: 20 years ago, the shark attack didn’t stop him hitting the surf (he was back in the water within six weeks); nor did a subsequent encounter with two orcas during the Lofoten Masters in 2017. “Shannon is an amazing coach and we have become friends,” says Kroell. “He taught me how to surf, but also how to trust. I’ve learnt to be more patient, more forgiving of myself and how to deal with circumstances that are unpredictable and beyond [my] control.”

The exhilaration of the surf trip also chimed with Kroell’s reappreciation of stripped-back luxury. Having launched her eponymous brand of super-soft, lightweight hobo bags in 2004 and winning the CFDA Award for Accessory Design two years later, today she is channelling her efforts into a new venture: Manufacture III, a lifestyle brand that will include accessories such as the sculptural, concertinaed Accordeon bag and a pair of supple hand‑knotted silk ballerinas and buttery-nappa slip-ons, then adding Venini-made glassware and Puiforcat silverware.

Arctic surfing has provided an immersive escape from Kroell’s professional journey. She’s kept in contact with Ainslie throughout lockdown and is now planning her fourth trip. Thankfully, orcas have remained firmly on the distant horizon.

gosurf.no; from NKr5,990 (around £500) for a five-day excursion, including coaching, equipment, B&B accommodation and transfers from Leknes airport. 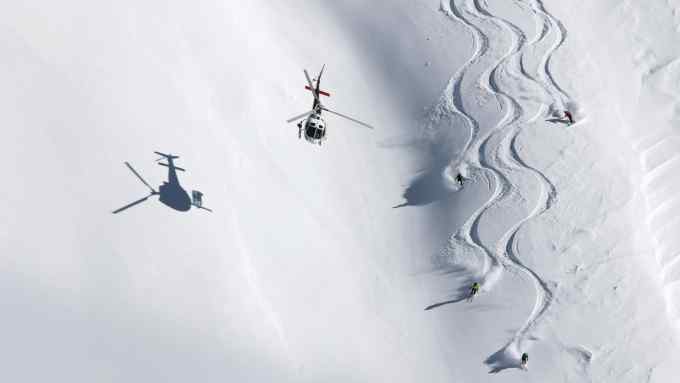