For a nation of 4m people to win a World Cup would be extraordinary. When even smaller Uruguay last won it in 1950, global football was much less competitive. Yet you can see how Croatia could beat France in Sunday’s final in Moscow.

The Croatia team are skilled ballplayers in the great Yugoslavia football tradition. And they play with an admirable coldness. In all their three knockout games, they fell behind, then had to play extra time. But whereas England crumbled mentally in the semi-final and forgot their game-plan, Croatia do not get thrown by stress, exhaustion or a home crowd. Their willpower is praised, but football is above all about constantly making good decisions. A player is always thinking, “Where should I be now?” And when he has the ball: “What should I do with it?” This Croatia team rarely decide badly.

Still, France look like just the sort of team to beat them. Twenty years after they lifted their first World Cup, bookmakers make them favourites to win their second.

Croatia’s game is structured around their midfielders Luka Modric and Ivan Rakitic. Playmaker Modric is always scurrying around making himself available for a pass, which is why at the age of 32 he has run 63km in the tournament, more than any other player in the final. He and Rakitic then feed wingers Ivan Perisic and Ante Rebic, with Croatia’s full backs sometimes helping with timely forward runs.

This system defeated England, who have no ballwinning midfielder, and who, with their three centre-backs, are often outmanned on the flanks. But France excel at smothering the central midfield. The Golden Ball for player of the tournament will probably go to either Modric or France’s 19-year-old forward Kylian Mbappé (who should become only the fourth teenager to play in a World Cup final), but French midfielders Paul Pogba and N’Golo Kante should be candidates too.

Pogba has so many gifts that the question was always how to use them. In 2016, he described to me the player he aimed to be: “All players rolled into one: from defensive midfielder to attacking midfielder to attacker. I’d like to get to the level where I have everything: Vieira, Deschamps, Zidane, Ronaldinho, Henry, Ronaldo.”

We know by now that he isn’t a Zidane or Modric, whose passes can pierce a closed defence. But he is a two-in-one: a great ball-winner who can then immediately move the ball forward before opponents regain their defensive positions. A telling graphic by the FT data team and Statsbomb shows that Pogba has the most metres of forward passing and dribbling per game in the tournament.

The same graphic puts Kante top for tackles and interceptions per game. The stock joke is that there must be two Kantes. He buzzes around foreseeing where danger will arrive, robs opponents from their blindside, then passes forward. 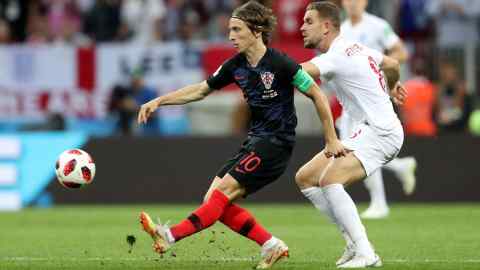 He and Pogba launch France’s counter-attacks. Typically, these involve only the three forwards, Antoine Griezmann, Olivier Giroud and Mbappé. Giroud, goalless and fairly toothless all tournament, is now being somewhat harshly compared with France’s non-scoring centre-forward of 1998, Stephane Guivarc’h. But Didier Deschamps, France’s conservative coach, will probably start him.

Mbappé will be excited about running at Croatia’s slow defence, and particularly their left-back, whether it is Ivan Strinic or Josip Pivaric. A small nation cannot have world-class players in every position. Germany’s Spiegel magazine shows that Croatia have conceded 7.4 shots per game in their penalty area, about three more than France.

The final may be closed and dour, like five of France’s six games so far (all except the helter-skelter 4-3 against anarchic Argentina.) That is because the French like to sit back and counter, while opponents sit back terrified of their counters. On Sunday, Les Bleus will be especially patient. Croatia’s relatively old team must dread a fourth consecutive extra-time.

Still, half the France team will remember their last final, against Portugal at Euro 2016. Playing in Paris, France were favourites even before Cristiano Ronaldo was carried off early. They lost. As this enjoyable World Cup has often reminded us, football is a funny old game.