Robinhood’s ambition to “democratise finance” is set for one of its biggest tests after a week of chaotic trading that pushed it to seek an urgent injection of $1bn and infuriated many of its most loyal clients.

The tumult has exposed the competing priorities the popular trading app faces between pleasing its users and the realities of operating in the heavily regulated financial industry.

The battle between individual investors and Wall Street hedge funds that reached a peak last Thursday sent shockwaves through the Silicon Valley company that has come to exemplify the new breed of organised groups of day traders with access to sophisticated tools.

Frenetic trading in shares such as GameStop and AMC rippled across the US brokerage industry, causing a cascade of equities and options trading curbs that drew the ire of many individual investors who felt the platforms were limiting their success, and the scrutiny of Wall Street’s top regulator.

Many brokers faced a sudden surge in requests for cash from clearing houses — important institutions in the financial system that ensure trades are settled in an orderly manner and prevent the failure of one company to make good on its commitments from threatening the broader securities trading market.

The demands were particularly acute for Robinhood. Named after the legendary outlaw in English folklore, the California-based broker has claimed to trace its ambitions to “democratise finance” to the Occupy Wall Street movement in 2011. 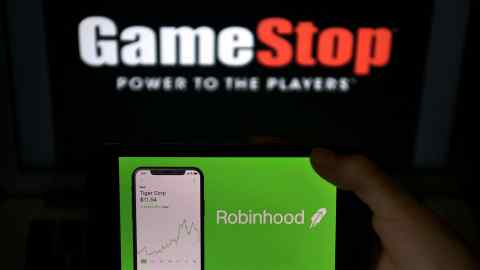 Chief executive Vlad Tenev revealed late on Sunday California time that the National Securities Clearing Corporation, an equities clearing house, had requested margin deposits of about $3bn at 3am Pacific time on Thursday. He described that amount as “an order of magnitude more than what it typically is”. Later, the NSCC reduced the demand to $700m, Mr Tenev said on social media app Clubhouse in a conversation alongside Tesla founder Elon Musk.

“I think the one thing that is maybe not clear to people is Robinhood is a participant in the financial system,” Mr Tenev said. “We have to work with all of these counterparties.”

The NSCC could not immediately be reached for comment outside business hours in the US, but said last week it did not comment on requirements of individual members.

Ribbit Capital, one of Robinhood’s early investors, stepped forward on Thursday to lead a new round of convertible debt financing. Iconiq Capital, another existing investor, joined Ribbit, and the two firms together wired more than $500m to the company, said people familiar with the financing. Robinhood simultaneously drew down more than $500m from credit lines with major banks, underscoring the group’s abrupt and significant need for cash.

One person close to the company said it satisfied the demands from the clearing house before the cash from investors was delivered to its account.

By late in the day on Thursday, Robinhood revealed it had commitments from existing investors to inject $1bn to fortify the group’s balance sheet. The investors have the option of converting their debt investment into equity at either a valuation for the company of about $30bn or a 30 per cent discount to an eventual initial public offering price, whichever is lower, said people familiar with the fundraising.

Four days later, the investors added another $2.4bn, bringing Robinhood’s total financing to $3.4bn. Some of the investors agreed to accept less favourable terms than what the company offered last week, people briefed on the fundraising said.

The deal represented a relatively low-risk bet on the future of Robinhood, though it could prove costly to the company if it undershoots its targeted valuation in an IPO. Private investors most recently valued Robinhood at $11.7bn last year.

Robinhood said the investment was a “strong sign of confidence from investors that will help us continue to further serve our customers”.

‘You can only be disruptive to a point’

Robinhood’s cash crunch and the dealmaking that ensued illustrate the difficult balancing act facing the company, which has come to fame through its pledge to liberate individuals from commissions commonly charged by established rivals.

Robinhood’s decision last week to restrict trading on certain popular shares, without initially providing detailed information on what had happened behind the scenes, triggered an avalanche of criticism from investors.

Many retail investors on r/WallStreetBets said they felt betrayed by Robinhood’s decision. Investors took to the channel to co-ordinate mass “reviewing”, where users gave Robinhood one-star reviews in major app stores, as well as to promote new competitors in commission-free trading, such as Public and WeBull.

The backlash is part, analysts say, a failure of messaging, creating expectations of disruption that were undermined when Robinhood had to act like an established brokerage.

“We would be at least as worried by the reputational damage as we would feel short-term excitement by the trading volumes and the publicity,” said James Anderson, manager of Baillie Gifford’s Scottish Mortgage Investment Trust, and early backer of fast-growing tech companies such as Tesla and Amazon.

Larry Tabb, head of market structure at Bloomberg Intelligence, added: “You can only be disruptive to a certain point, because at the end of the day, you’re one side of a trade.”

Mr Tenev acknowledged last week that the firm was caught off-guard by the “lightning-fast” speed with which social media spread information and created such an intense jolt of trading.

Robinhood may struggle to hold on to its outsider identity as it is forced to play by the rules, industry participants say.

“In the late 90s you couldn’t throw a stone without hitting a new online brokerage,” said Mr Tabb. “What happened to these guys is they eventually realised the market is bigger than traders . . . They all got gobbled up. Now they look like traditional financial conglomerates.”