Just weeks after the first leveraged single-stock exchange traded funds listed in the US, investors are being offered the polar opposite in a Tesla-based offering that hedges for steep declines in its price.

The Innovator Hedged TSLA Strategy ETF (TSLH) will limit potential losses to 10 per cent a quarter, with the cap for the initial contract (running to the end of September) set at 9.29 per cent.

“While there is little doubt Teslas are amazingly sleek, smooth-driving vehicles, the very volatile ride in the shares leaves a lot to be desired,” said Bruce Bond, co-founder and chief executive of Innovator.

“Yet, the innovation potential that Elon Musk’s company represents is hard to ignore. For those investors with a lower risk tolerance who still desire exposure we’re excited to bring this investment strategy to market.”

The launch comes amid a banner year for so-called “defined outcome” ETFs in the US this year, as investors have sought protection from weak and volatile markets.

They have taken in a net $5.4bn, according to Morningstar, up from $3.3bn during the whole of 2021 (itself a record), even as flows across the wider ETF spectrum have only reached 35 per cent of last year’s total. Innovator itself has seen net inflows of $2.6bn into its defined outcome ETFs so far this year.

TSLH “is a logical extension of what we are seeing with defined outcome ETFs, which have been extremely popular with advisers and investors who want to get exposure to the equity market but in a risk-managed way”, said Todd Rosenbluth, head of research at VettaFi.

“Tesla is one of the most volatile stocks on the US stock market and this product is going to allow people to get exposure to a high-growth company but with downside protection.”

Innovator has built up a large book of buffered ETFs, which provide a degree of downward protection, based on indices such as the S&P 500.

TSLH differs from the bulk of its offerings, though, in that it instead has a hard floor — investors are fully on the hook for the first 10 per cent of any sell-off in a quarter but are fully protected after that.

“For some of these high beta stocks, the concern is that there can be a really big move. What people are looking for is protection against a big downdraft,” said Bond, who noted that Tesla’s share price tumbled 38 per cent in the second quarter of this year (when it was the 11th-most volatile stock in the S&P 500) after edging up 2 per cent in the prior quarter.

TSLH will invest 90 per cent of its assets in three-month US Treasury bills, which provide the floor and use call options to set the cap, which will vary every time the ETF resets quarterly, depending on market conditions.

Bond said he expected the cap to generally be above the 9.29 per cent of the initial contract. Fees are 79 basis points a year.

Innovator has no immediate plans to launch similar products based on other companies until it has evaluated the success of TSLH, which had volume of $795,000 on its first day of trading on Tuesday.

“It has the potential to be very successful, but we really don’t know until we bring it out and test it. We would like to raise $0.5bn,” Bond said.

Investors could, of course, simply own Tesla stock outright and sell if losses approach their comfort level, without incurring a 79bp-a-year fee.

However, Rosenbluth said that while “this isn’t for everyone” it was “compelling to have that risk-management done for the end investor without them having to do it themselves. 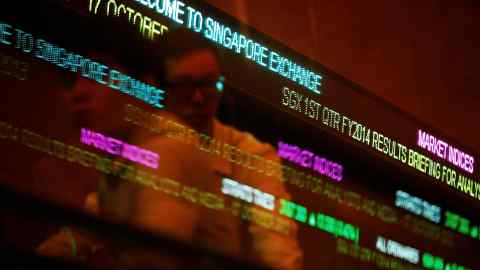 “This is putting a plan in place and forcing you to stick with it. It’s setting the alarm clock for you. Is it a necessary tool in the toolbox? No, but it has its use cases. It’s solving a problem for some people,” he said, adding that it could be useful to gain exposure to other volatile, high-profile stocks, such as Alphabet and Meta.

“You are investing in Tesla because it has the potential for stellar growth and high volatility, so why would you sacrifice some of that?” Lamont asked. “If you want less risk, put [Tesla] into a well-diversified portfolio. You can do that yourself without paying 80bp.”