From the pitch to the boardroom

The first time Mathieu Flamini turned up to the Arsenal training ground in a suit, his baffled teammates asked if he had mistakenly thought it was a match day.

“When they saw me going into training dressed in a suit, they asked, ‘Where are you going? The game is this weekend.’”

In fact, the French player was keeping a secret — for the previous few years he had been working on a biotechnology company that he believes could help address environmental damage. While other professional footballers might spend their free time on games consoles or posting photos on Instagram, the Arsenal midfielder spends his negotiating deals and taking conference calls.

And while footballers’ retirement plans commonly involve going into management, punditry, or perhaps running a pub, Mr Flamini hopes to prove that success on the football pitch can lead to success in the boardroom.

Having spent several years keeping his business ambitions from his fellow players, fans and even family, Mr Flamini has begun to go public. What do his teammates think of the venture?

“It was a big surprise for them,” he admits.

Mr Flamini’s company is GF Biochemicals: the G refers to Pasquale Granata, his business partner, and the F to Flamini. It produces a chemical called levulinic acid from waste wood, which can then replace oil in a range of products from fuel to plastics.

“[Mr Granata and I] were both very concerned by climate change and we wanted to do something about it,” explains Mr Flamini. “So we started meeting scientists at the Polytechnic University of Milan and started research to develop that technology.”

Having given his name — or at least a letter of it — to the company, the international footballer knew it would attract disproportionate attention, so he kept it under wraps during those uncertain early days.

Now it has offices in Italy, the Netherlands and the US, and a factory in Caserta, Italy, that can produce 10,000 tonnes of levulinic acid a year by next year, the most in the world. This year, GF bought Segetis, an American company which takes the levulinic acid that GF produces and turns it into chemicals used in an array of household products, such as fragrances and cleaners. GF employs more than 50 people and is on the verge of signing two deals with household names, according to Mr Flamini, though he will not name them yet.

Mr Flamini says he has invested “a lot of money”, but will not say how much. Nor will he say how much the company makes in sales or profits, beyond saying it will turn a profit this year.

But the technology, while still at a very early stage, has some support. In 2004, the US Department of Energy named levulinic acid as one of its 12 biochemicals most likely to produce value in the future. 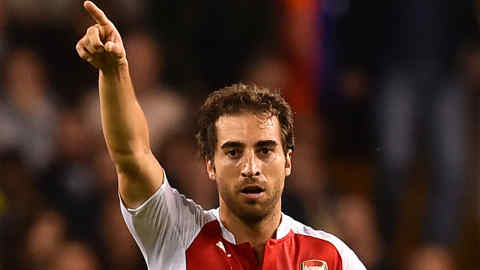 Adrian Higson, a consultant at NNFCC, which studies bio-based technologies, says: “This is definitely bona fide, and people have known about the technology for a long time. The question is whether anyone can lower production costs enough to make it competitive.”

Mr Flamini says: “We are complementary to the oil industry.”

He will not disclose production costs, but admits the whole venture is a risk — something he says football has taught him how to handle.

“I took a lot of risk when I started my football career, but I believe there is no successful story if at one point you didn’t take any risk,” he says.

Mr Flamini says his football career has helped prepare him for business. He has learnt from Arsène Wenger, the professorial Arsenal manager, who has signed the midfielder to the club twice in his career.

“Arsène is a kind of mentor for me,” says the 32-year-old Mr Flamini. “He is someone who will always keep his calm, and I have learnt from him never to take a decision in the heat of the moment.”

He admits, however, that keeping his cool will be slightly easier in his new career than on the football pitch. An energetic central midfielder, he earned the ire of some Arsenal fans earlier this season when he gave away a penalty against Barcelona just 47 seconds after coming on as a substitute.

“When you [enter] a football field, there is passion, there is adrenalin,” he says. “I’m quite calm off the pitch. But on the pitch, I transform myself. I become sometimes aggressive — in a good way. It’s kind of transcendent, you know?”

“I consider us the gladiators of our time. When you’re on the pitch and you’re facing your opponent, it’s him or you — and I would prefer it to be him than me.”

The 10 episodes begin with the husband-and-wife team behind treetop adventure company Go Ape.

But he says he intends to bring some of that competitive energy to the boardroom. “When I think about when we started the company, and now see that we have also offices in Holland, America . . . all of that for me is adrenalin. It is stimulation [that] has pushed me to keep going and to move forward.”

The stereotypical footballer may be even less interested in climate change than business. Mr Flamini admits his is an unusual passion, even if on occasion his lifestyle fits the mould of a footballer more than a green entrepreneur.

What car does he drive? He replies with a laugh, “An E Class [Mercedes].” Is that the only one? “Let’s not go there.”

He has made other green changes such as recycling more and becoming vegetarian. But he adds that he does not believe that caring about climate change means a worse quality of life.

“We want to change things and allow people to still live the same style of life. So the idea would be, for example, one day to be able to drive the same car but with a biofuel instead.”

Nor is biotechnology his only business interest. His next venture is a fintech company, although once again he is not yet ready to disclose either the company or the product.

For now, though, his primary focus remains on football, with Arsenal hoping to stay in next season’s Premiership title race for longer than they did in the season that has just finished.

“Business is something I developed on the side of football and will probably be in my life after football. But today I am a football player and I dream about football and I eat football every day.”

Mathieu Flamini is unusual in pursuing a business career while playing professional football — but not unique.

And while celebrities have often made money by putting their name to existing products, it is becoming more common for them to be involved in the creative process. Dr Dre, the rapper, started the audio group Beats, which makes headphones, and was sold to Apple for $3bn. Justin Timberlake, the singer and actor, has launched a clothing line.

But not all stars-turned-entrepreneurs have been so successful. The rapper Kanye West has previously started a record label, a chain of burger restaurants and a network for creative people. But three months ago, Mr West told his Twitter followers: “I write this to you my brothers while still 53 million dollars in personal debt . . . Please pray we overcome.”