Virgil Abloh — ‘the world is looking for the second coming’

As he makes his Louis Vuitton menswear debut, the 38-year-old designer shares his thoughts on hype, history — and hoodies

“I feel like now the computers need to be reset,” says Virgil Abloh, the new creative director of menswear for Louis Vuitton. “The genre of fashion design that I come from is no longer satisfied by just being new. I feel there’s a new establishment happening. And now is the time to be assertive.”

Abloh is sitting in the brand’s design studio in Paris, wearing a denim jacket and jeans with an old sweatshirt beneath. Three months into the job, he seems perfectly at home: Miles Davis plays in the background through decks he has set up in his office (and from which he will later post a mix recorded live on Apple Music). He’s calm. Just days before his first collection, he’s in a rare creative lull, waiting for the clothes to come back from the factories ready to be styled.

The 38-year-old Chicago-born designer epitomises the new establishment of which he speaks. Until his appointment by the LVMH group in March, Abloh was best known as the founder of Off-White, the six-year-old label that was instrumental in turning streetwear into a high-fashion industry. He is also famously a long-term creative consultant to Kanye West. When the two first attended the Paris menswear shows, in 2009, they were regarded as outliers, fashion fans who wanted to be on the inside. Not any more. Today, Abloh leads the menswear category at one of the most powerful labels in the world: first-quarter revenues at LVMH, reported in April, showed organic revenues had grown 13 per cent to €10.85bn thanks to a strong performance by Louis Vuitton. The house, which is driven by sales of its leather goods, accounts for 25 per cent of all LVMH group sales and an estimated 50 per cent of its profits. Abloh is the first African-American creative director at an LVMH label.

And his work is revolutionary, if not for the garments themselves (his big sellers are quite standard T-shirts and sweats) but for the environment he has created around them — the music, the crowds of fans, the hype. Social media has been his mouthpiece (the designer has 2.3m Instagram followers). To many, especially Abloh’s millennial customers, this is the natural way of the world. Others have balked at the shift. Abloh is happy with the momentum. “That line has been crossed,” he says. “Enough shirts have been sold and enough Instagram posts have changed the ecosystem, so you can’t go back.”

But he is keen to move the conversation forwards. “Now that we’re the establishment, how do we behave?” he says. “Is it a complete upheaval of everything before? I don’t believe that. I think there has to be care in the thinking. There’s a lineage here, which is part of what I’m proposing.”

Abloh’s takeover has been unusual in its friendliness. His office is full of links to LVMH’s present and past. Hung on a hook is a Louis Vuitton bag from then creative director Marc Jacobs’ 2007 collaboration with artist Richard Prince. Abloh remains an ardent Jacobs fan. He is great friends also with Kim Jones, his predecessor, who is now creative director of Dior Homme. Jones was an early Abloh supporter — “I used to sleep on his couch,” says Abloh — and the office is still furnished with the marks of Jones’s tenure: a red Supreme/LV carpet, laid two years ago to celebrate his blockbuster collaboration, is a vivid reminder of the act he has to follow. Abloh isn’t in a rush to redecorate. “It’s peripheral,” he says of the decor. A trained architect, he will eventually refurbish the office — in concrete.

His arrival at Louis Vuitton was the culmination of a long, slow courtship. “In a weird way, there were no direct conversations,” he says of his negotiations with Louis Vuitton’s chief executive Michael Burke. “My relationship with the house, I guess, started seven years ago. I interned at Fendi while Michael Burke was overseeing Fendi.” They met again in 2015, when he was shortlisted for the LVMH Prize for young designers. “Then, it was a series of meetings,” he says. “And, then, all of a sudden, I got a call . . . ”

Abloh appreciates that his appointment marked a creative shift in focus. What he didn’t expect was the cultural reaction. “In America, it felt like something had happened,” he says. “Like, ‘You’re going to be head of a French house? You don’t look like every other designer that’s come before.’ ” The job comes with certain expectations. “I’m a kid from Chicago,” he says. “I know what it was like to see Obama become president. We felt the tectonic plates of the world shift.” 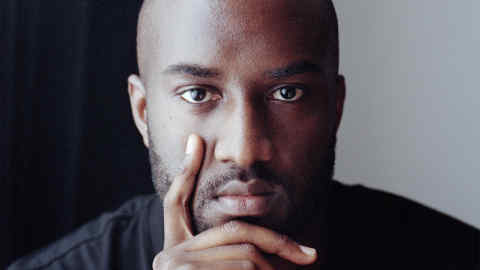 Tectonic though Abloh’s own move may have been (in the fashion world at least) the designer has tried to keep himself on the level in the build-up to his debut. “The world is looking for the second coming,” he says. “I’ve talked myself around to stopping and thinking in the turbulence. The most important message is to let me just focus on making the most beautiful normcore clothes, but as luxurious as possible.”

Most of Louis Vuitton’s 25m Instagram followers are familiar already with Abloh’s vision for the brand, which mixes tailoring with sports, with a focus on utility. Using the Louis Vuitton Instagram account, he has been quick to share stories from behind the scenes to release the pressure of the show. He is also aware of his dual audience: fashion regulars, and those viewers, via livestream, who may not have seen a show before. “I want there to be something valuable for them,” he says. “It’s like I speak to the tourist and the purist at the same time.”

His first collection is a mix of all-white looks that then bursts into colour. The focus is on the cut of the garments themselves rather than any catwalk theme. Abloh is obsessed with the precision of seemingly boring clothes. “The very first thing I made here was a T-shirt,” he says. “What’s the perfect weight? Why are fashion T-shirts usually so tiny? For me, there’s a subtlety in focusing on the right shape of T-shirt and pant. I recognise that it’s boring, but the idea is to catch people off-guard and reward them in some valuable way. I’m trying to make something luxurious approachable.”

Alongside the more tailored looks, such as the white suit he debuted at the Met Gala in May (his attempt “to bring a romantic quality to menswear — like Call Me By Your Name meets the movie Kids”) the collection is also rich in the more familiar totems of streetwear.

People live by the size label in their garments. That affects their whole mental state. Their self image is related to fit

Why does a kid who’s 30, professional, works a great job, prefer to wear sneakers and a hoodie?” he asks of the shift in men’s clothing choices. “It’s because real people say this garment — a hoodie — is important. That’s the feedback. That’s the culture. I’m going to make streetwear — and everyone can go crazy. It doesn’t deflate the importance of tailoring. But this thing is candy.”

He still wants to elevate the genre. “A number of garments in the collection are laser-precise studies of the most normal, basic things that men wear today,” he says. “We’re making a double-faced hoodie that [has] the same hand-stitching that you would find on a handmade tailored suit.” Clients might also like the crew-neck T-shirt in leather, or the jean jacket in mink.

Likewise, his accessories have the same youthful, aspirational appeal. As a kid growing up in Chicago, Abloh could only afford Vuitton wallets and key card holders, and these became his passport to the brand. He still feels that personal connection.

“The joke in the studio,” he says, “is the word ‘accessomorphosis’.” What? “When does an accessory morph into a garment? We’ve all been carrying these cross-body bags. It’s a modern way of dressing. From day one, I was like, let’s own this space. It’s the type of garment that can be distinctly Vuitton.”

The result is a shoulder holster in monogrammed leather. “It can be worn over the outer layer, or worn as a mid-layer, almost like a holster would be for a gun. It’s a utility thing, and you can fashion it up.” It has all the makings of a cult hit.

But Abloh’s ambitions go beyond cut and colour. He’s been thinking about the way men wear clothes, and how they feel in them. He is determined to make the cut of fashion more universal. “The era before, you had to be skinny,” he explains. “I was like, that doesn’t relate. When you look outside, that’s not valuable. I just want to find the size medium that a lot of people could wear, and to not be oversized. People live by the size label in their garments. That affects their whole mental state. Their self-image is related to fit.” He adds: “Are we just here leading trend of colour and garment, or can I launch a trend thinking about responsibility towards body image, to have an effect on people and society at hand?” A truly inclusive house in the heart of French luxury? That really would be seismic.

Abloh is aware his Louis Vuitton comes with huge expectations. He also knows it will almost inevitably result in some criticism. But he is prepared.

Explore the series
READ MOREBest of FT style 2018
Didn’t go there: got the T-shirt Melania’s jacket, Meghan’s wedding dress, #MeToo. Here’s our wrap of the main stories that made the style headlines this year