China’s leaders emerge from the fog of pollution denial

In mid-2012, Donald Trump fired off this tweet: “The concept of global warming was created by and for the Chinese in order to make US manufacturing non-competitive.”

Apart from its sheer absurdity, one of the most striking things about Mr Trump’s assertion is how similar it sounds to the paranoid ravings of Chinese nationalists, who blame almost everything on the CIA and evil, imperialist America.

With admirable patience, Chinese officials have pointed out in recent weeks that global discussions on climate change were started by the Reagan administration in the 1980s at a time when China did not even acknowledge the existence of pollution within its borders.

Thanks to the election of Mr Trump, who remains unconvinced by the overwhelming scientific evidence of anthropogenic climate change, China is now poised to become the world’s leader in tackling global warming and the environment. Nobody is as surprised by this new responsibility as China itself. Less than a decade ago, the Chinese government still refused to admit that the acrid clouds of choking smog hanging over most of the country had anything to do with industrial development.

Fed on a diet of government denials and propaganda, ordinary citizens in Beijing would insist the sulphurous haze enveloping the capital was in fact harmless “fog”, despite the fact the city is built on a desert. 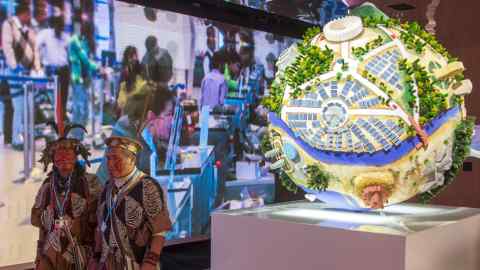 The big shift in China’s policy and public perceptions was prompted, ironically, by the actions of the US government. In 2008, the US embassy in Beijing decided to install an air monitor on its roof and began publishing hourly updates of pollution levels through its Twitter account.

The Chinese government initially reacted with threats, saying the tweets were “illegal”. But eventually Beijing caved to public pressure and began monitoring and publishing pollution levels itself.

Since then, China’s authoritarian leaders have become increasingly zealous in their attempts to halt rampant poisoning of the environment, even to the point of declaring a “war on pollution”.

This militant devotion to environmentalism now extends to the issue of planetary climate change, which Chinese hawks once decried as an American plot to “contain China” and stop it from reaching its full potential as an industrial juggernaut (sound familiar?).

This does not mean China’s Communist leaders have turned entirely soft and green. Beijing still insists on “common but differentiated responsibilities”, which means countries that industrialised earlier, like the US and Britain, have a bigger obligation to tackle climate change. But the crucial difference from the past is that China’s rulers actually want to cut emissions regardless of what the US or any other country decides to do.

According to people who claim to know, President Xi Jinping himself genuinely cares on a personal level about protecting the environment. More important is the Communist party’s realisation that reducing the country’s shocking levels of pollution has become a matter of political survival.

Since the Tiananmen Square protests of 1989 the autocratic state has survived because of its reputation for competence, particularly in its handling of the economy and its ability to raise living standards. But the economy has been slowing for several years and the huge environmental cost of untrammelled growth is painfully apparent to all.

Some in China are even starting to question the legitimacy of an unelected government that cannot provide breathable air. Most dangerous of all are the middle and upper classes who can afford to buy non-poisonous water and food imported from abroad but still have to breathe the same air as everyone else.

Fear of losing legitimacy and ultimately power is the most important motivation for China’s rulers to take the global lead in tackling emissions and climate change. But they also recognise they have an enormous opportunity.

If they can channel the urgency created by shocking levels of pollution into finding technological solutions to climate change then they will end up controlling the technologies and economic benefits that flow from them. That is now the basis of Chinese industrial policy.

So the opposite of Mr Trump’s tweet from four years ago is probably true. Thanks to his scepticism towards man-made climate change, US manufacturing is likely to be left behind and the green economy of the future is now far more likely to be made in China.