Liberating dress codes – and having fun with clothes

Men and fashion aren’t always the most comfortable of pairings. Talk of runway looks and trends, and most men start to fidget nervously – there remains a deep-rooted suspicion among even the most confident of dressers that to care too much for fashion can be seen as rather odd. But this persistent prejudice is fast eroding as a new generation of dressers is doing away with traditional menswear codes.

In planning this men’s style issue, following a long period of reflection, we were keen to push some buttons and champion some fashion fun. When we asked Julian Ganio about his thinking behind “Eclectic Avenue”, the shoot he did with Josh Hight, the HTSI contributing editor and stylist said he wanted the mood to feel a bit more energetic and euphoric – a shoot that shouted of better things to come. As we await the final countdown of this long, miserable winter lockdown, there is certainly a sense of anticipation in the air. For many, the bottled-up frustration has given way to an excitement that, after months of stalemate, our lives are ready to explode. Josh and Julian’s shoot – with its cast of diverse characters and personalities – blends slick tailoring, high fashion and early-’90s rave. Some subjects are caught in simple compositions, others are trance-like or dancing through a multicoloured lens. “We tried to allow each sitter to express their own shape and character,” says Julian. “In many ways it was among the free-est shoots I’ve done.”

The results are indeed euphoric and very freestyle, and so, as a natural counter, we also offer some restraint. “The Perfect Pare” examines the beauty of the essential item and celebrates the new minimalist wardrobe for men. We also speak to the superfans of Margaret Howell. The British designer has been in business for more than 50 years now, serving a utilitarian uniform to discerning gentlemen (and ladies) who admire the rigour of her muted palette, her midcentury influences and an unwavering aesthetic that eschews all fuss and flounce. As such, there is a distinctly clannish edge to Howell clients, as captured brilliantly by the photographer Vivek Vadoliya, who has shot portraits of her creative patrons, including Fergus and Margot Henderson and John Akomfrah. “I love its lack of bombast,” says Akomfrah, of the designer’s subtle ethos. “Its reformulated Englishness; its disavowal of ostentation. The way in which it’s rooted in what feels seemingly practical and yet, at the same time, is very stylish.”

Creative endorsement doesn’t come any more starry than Brad Pitt, the actor who has undergone a later-career renaissance in recent years with a string of high-profile production credits, philanthropic projects and acting roles. Pitt’s association with Brioni, coinciding with his red-carpet march toward the 2020 Oscars, was serendipitous for the Kering-owned tailoring brand, giving it maximum exposure and helping revitalise a house that had been stuttering in sales. In “He’s with the Rebrand”, Aleks Cvetkovic finds the company a great case study for examining the challenges faced by so-called heritage labels as they shrug off their more formal associations to move forward with the times. 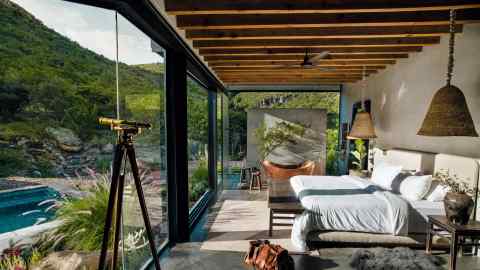 For some men, however, there are far more important accoutrements of style than the cut of one’s blazer, and in this issue we look at one of the most coveted status symbols ever made: the Jaguar (“Top Cat”). From the E-Type – which marks its 60th anniversary this year – to the classic 420, Jaguar is capable of quickening the pulse rate of even those, like me, who claim to be completely unmoved by motorcars. A few weeks ago, Nick Foulkes travelled to an airfield in Surrey to test drive a highly specced 420 commissioned by Lord Mountbatten that left the factory in the late ’60s, and is now part of an estate sale at Sotheby’s on 24 March. It’s a glorious accessory. Almost totally impractical, not remotely environmental, but perhaps one of the greatest style statements of them all.