Ocean plastic, digital waste and old cars are just some of the ingredients making the eco-timepieces of tomorrow

You might think that every mechanical watch, made in Switzerland or otherwise, is inherently sustainable – no built-in obsolescence, every part repairable. “You never actually own a Patek Philippe, you merely look after it for the next generation,” and all that. But what’s the cost (in sustainability terms) of the mining of gemstones and metals, the energy needed to produce glass, plastics and ceramics, the production of rubber or leather?

“Behind the polished face of a luxury watch, a potentially immense ecological footprint is hidden,” said the World Wildlife Fund only two years ago in a report on the Swiss watch business with its long and varied supply chain of metals and gemstones.

On the plus side, sustainability is now the primary driver of business innovation according to the Harvard Business Review. At the top end of the watch industry, brands including Cartier, LVMH, Jaeger-LeCoultre, Omega, Chopard and IWC Schaffhausen are now signed up to the Responsible Jewellery Council, whose certification looks at an ethical supply chain covering gold, silver, platinum group metals, diamonds and coloured gemstones. Since 2018, 100 per cent of Chopard’s gold has come from ethical sources and, like Rolex, it operates its own gold foundry so it can recycle. IWC Schaffhausen releases a sustainability report to the public every two years; and Richemont and LVMH both have policies that go far beyond legal mandate.

But who is looking beyond the traditional watchmaking raw materials to create new, potentially reusable and recyclable products for the future? A good place to start is with those highlighting the need to clean up the oceans. They’ll never remove the eight million tonnes of plastic that leaches into our seas every year, but with innovation they are recycling some of that and raising awareness.

Recycled material can be equal to new material

Tom Ford recently launched its Ocean Plastic Timepiece (£895). The plastic used in the making of the watch is “100 per cent ocean plastic” with “an average of 35 bottles of plastic waste used per product including watch and strap”. For every 1,000 watches sold, Tom Ford reduces plastic waste to the “equivalent of 35,000 water bottles or approximately 490lbs of plastic”. The raw material was collected in the oceans, along coastlines and from uncontrolled landfills.

It’s important to consider the way the plastic has been recycled, too, which in Tom Ford’s case is a “100 per cent mechanical” process developed with the Swiss University of Applied Science that used only solar energy. Look out for Tide Ocean Material in association with other manufacturers. It’s the Swiss outfit behind the collection, upcycling and verifying of the plastics used by Tom Ford. “We give plastic waste a value” is the company’s mantra.

Social justice is part of the Tide narrative, too: on five islands in the Andaman Sea, fishermen are being trained and paid to gather and sort plastic waste. A “just transition” for communities such as these adds to the sustainability balance sheet.

Ulysse Nardin turned its attention to the marine circular economy some years ago. Its research unit studies oceanic materials such as oyster shells, algae, marine PET (polyethylene terephthalate or plastic bottles) and polyamide fishing nets. Earlier this year, it launched the R-Strap – its first to be made from fishing nets, created in support of swimmer and adventurer Ben Lecomte, who is routinely confronted by the devastating impact of plastic pollution in the oceans. These straps accompany the Diver, Marine Torpilleur and Freak X watches.

Recently, however, Ulysse Nardin went one step further and revealed its Diver NET concept watch, which will come to market within two years.

The watchmaker teamed up with three young Brittany-based designers, the co-founders of Fil&Fab, who collect nets from fishermen that they sort by colour, shred and extrude into pellets. These become the raw material for the watch’s case, middle, back and bezel decoration. As Yann Louboutin of Fil&Fab says, they are proving that “recycled material is equal to raw material”.

Standard sapphire crystal has been replaced by more energy-efficient transparent ceramic glass, and the thread used in the concept watch’s PET strap is created from waste plastic by Tide. And, unlike the Tom Ford watch that, for all its other virtues, is powered by a battery, it will have a mechanical movement.

Breitling introduced its first strap made from recycled materials in 2018. The Nato strap in Econyl yarn, made from “regenerated nylon waste from landfills and oceans around the world”, now adorns the Superocean Heritage Chronograph 44 Ocean Conservancy limited edition (£4,880), the Superocean Heritage Chronograph 44 Outerknown (£5,600) and its latest, the Superocean Heritage ’57 Outerknown (from £3,400). “We try to do as much as possible within our sphere of influence,” says CEO Georges Kern, who recently launched a 100 per cent recycled and recyclable watch box, created from upcycled plastic bottles, for which it received a stamp of approval from the Solar Impulse Foundation for its innovation as an “Efficient Solution”.

Recycling goes beyond plastics, however. Panerai, which has been associated with the Italian Navy and the oceans for more than 100 years, is in the early stages of its move to greater sustainability. “Our journey is a very recent one,” says Jean-Marc Pontroué, the brand’s CEO.

Last year, Panerai launched the limited-edition Submersible Mike Horn with a case, bezel and caseback made of EcoTitanium (produced from scraps from aircraft manufacturers’ yards) and a recycled-plastic strap (£35,800). This year, the brand produced the skeleton Submersible EcoPangaea Tourbillon GMT. “This idea came from [explorer] Mike Horn,” explains Pontroué. “He came with a piece of metal from his boat Pangaea, saying: ‘Either I throw it away, or I’d love if you used this piece of metal to make watches.’ I was thinking he was crazy when he proposed that to me two years ago.” It’s now a reality. The manufacture has made just five limited-edition cases for its Mike Horn Submersible EcoPangaea. “Forty per cent of the value of this product is made with recycled components,” says Pontroué. The former driveshaft of the boat is now the base material for a £169,900 timepiece.

From a recycled boat to recycled cars. REC Watches, launched in 2014 by the Danish “childhood buddies” Christian Felix Mygh and Jonathan Kampstrup, claims to “recover, recycle, reclaim”. The first challenge they set themselves was to salvage a Mini Cooper, recycling as much of the material as possible to create brand-new watches “honouring the original design”. They have since done the same with a Porsche 911, a Ford Mustang and a MK IX Spitfire.

This year, the partnership has created the RNR (Road Not Required) limited editions crafted from a classic Land Rover. They are the company’s first Swiss-made mechanical pieces. The Beach Runner version (£1,370) is a limited edition of 552 pieces, made from the roof of a 1981 Land Rover Series III once owned by the Portuguese photographer and filmmaker Daniel Espírito Santo. The RNR Rockfighter (also £1,370) is limited to 463 pieces, with a dial handcrafted from the door of a 2003 Land Rover owned by off-roader Michael Ortner. The original vehicles were far from sustainable, but what they have morphed into is another matter.

Where else does innovation lie? Swatch recently launched a 13-watch collection, the 1983 (from £58), using a bio-plastic derived from the castor plant; the packaging is made from a paper foam consisting of potato and tapioca starch that is fully biodegradable or, in Swatch language, “Bioreloaded”.

The castor plant was first used to make a watch by Mondaine in 2017 for its “environmentally friendly” Essence watch (£189). After processing, oil extracted from castor plants can be used like an organic plastic. There’s a new collection out this year. Other renewables used in the Mondaine range include wool and cork, as well as packaging made from 100 per cent PET bottles.

These watches, like the Tom Ford piece, are battery-driven and there is a longer-term issue over the sustainability of large-scale castor farming. Whether bioplastics are always less polluting than oil-based plastics remains a moot point, but Swatch and Mondaine are at least asking the question.

The Danish company Circular Clockworks, meanwhile, is producing “circular” watches – both in the literal and sustainable sense. Every watch (from €149) is designed for disassembly. The company not only uses recycled ABS (if you really need to know, it stands for acrylonitrile butadiene styrene – a thermoplastic polymer that is expensive when virgin) sourced from TVs, coffee makers and construction helmets, but also recycles leather scraps or offcuts from the shoe industry for straps. The straps are bound by natural latex and have no metal fixings, which means they are fully biodegradable. “Every watch has the potential to be used as a base for new watches,” say the founders Tom Gudde and Ceriel Lucker, who not only facilitate repairs but will buy back any watch rather than let it reach the point where it lies discarded at the back of a kitchen drawer.

And finally, there’s Vollebak’s Garbage Watch, which could be just the thing. It claims to be “built from the tech the world threw away in the trash”. It looks like a miniature Pompidou Centre on the wrist. The waiting list is now open for the 2021 launch. 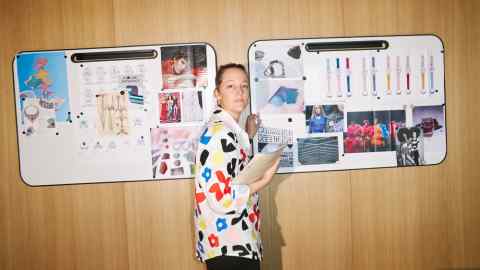