Dong aims to phase out coal-fired power generation by 2023

Denmark’s Dong Energy has pledged to become one of the first major European power companies to stop burning coal within six years as it ratchets up its shift away from fossil fuels towards renewables.

Dong is already the world’s biggest offshore wind farm company, building more than a quarter of the capacity installed globally. It plans to offload its operations focused on oil exploration and production later this year, after pulling off one of the largest stock market listings in 2016.

It has been steadily converting its Danish power stations to burn wood instead of coal for the past 15 years and now plans to switch two remaining plants by 2023 to make its generating division entirely coal-free.

Other European power companies are also scaling back on coal and expanding into renewables, including Italy’s Enel. It has said it will not build any more new coal plants and aims to be fully decarbonised by 2050.

“The future belongs to renewable energy sources,” said Henrik Poulsen, Dong’s chief executive, adding he believed the company was the first in Europe to aim for such a target.

He was speaking as Dong reported net profit from its continuing operations under international accounting rules of DKr10.5bn ($1.5bn) in 2016, compared with DKr1.9bn in 2015, as last year’s earnings were boosted by lower cost of sales and gains on asset disposals, among other things.

Dong’s earnings before interest, tax, depreciation and amortisation from operations including oil and gas were DKr25.6bn, slightly above the company’s most recent guidance of DKr24bn to DKr25bn.

Mr Poulsen said the group’s results had been boosted by the renegotiation of some long-term gas contracts.

“On top of that, the wind power division has generally speaking been performing extremely well, with a 93 per cent growth in operating profits,” he added.

Dong has recently expanded beyond its home base and the UK, the world’s largest offshore wind market, into Taiwan and the US. 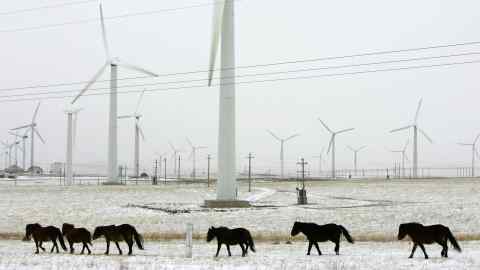 US President Donald Trump once fought to stop an offshore wind farm near one of his golf resorts in Scotland and has vowed to boost fossil fuel use and pull the US out of the Paris climate change agreement.

However, Mr Poulsen said he was “cautiously optimistic” about the future growth of renewables in the US, pointing to the large number of green jobs in many states.

And if the US left the global climate accord, other nations, cities and companies such as Dong would step in to carry on the effort to curb global warming, he said.

He also downplayed speculation that Dong could face problems in the UK over wind farm contracts it was awarded in 2014 that were much more generous than those subsequently won in more competitive auctions.

Rival groups were not willing to take the risks Dong had taken with that early investment, said Mr Poulsen, a move that had driven down costs and helped boost the offshore wind industry supply chain in the UK. The UK government recognised this, he added.