Taking a basic toiletry and selling it directly, backed by a lively social media campaign, has created a $1bn business

If Michael Dubin, founder of Dollar Shave Club, needs to thank anyone for his success, it should be shoplifters.

Disposable razor blades make rich pickings for shoplifters. They fit into that group of products security experts in retail refer to as “craved”: concealable, removable, available, valued, enjoyed and disposable. Over the years US retailers increasingly have locked them away in glass cabinets — much to the irritation of many genuine customers, too.

Dubin launched the business of selling razors because he was fed up of paying for disposable products in a market dominated by a couple of companies, mostly Procter & Gamble’s Gillette brand. The new business would offer its generally male customers easy access to good-quality razors via a subscription service.

Dubin cannonballed into this deepening pool of consumer resentment with an amusing 2012 commercial video on YouTube. He has claimed to have done only some improvisational comedy course work but no stand-up. If that is true, it does not show: he touched a collective funny bone while generating demand for his razors.

His pitch — the video’s title was “Our Blades Are F***ing Great” — played well to men annoyed by the rising cost and myriad features of disposable blades, and mocked the established brands while claiming to offer better value.

The reaction made Dubin instantly famous: his video has so far had 24m views. The Dollar Shave Club’s own website could not cope with the sudden interest and crashed, so surviving this surge of publicity was his team’s next goal.

“I have to give our small and relentless team credit for getting us through the days after the video went viral,” says Dubin. “It was a really hectic time.”

Though not the first personal care subscription service — New York-based Birchbox launched one for beauty products in 2010 — Dollar Shave Club’s success has spawned an industry of such services. Whereas at the time of Dollar Shave’s launch, subscription services offered a surprise box of items based on what they felt were customers’ preferences, Dubin’s business was different. Dollar Shave sent exactly what was ordered.

Initially, customers receive a razor handle and pack of cartridges. Each month thereafter, replacement cartridges arrive at their regular price of $1, $6 or $9. In addition, the company sells so-called “premium” products, such as shave butter and post-shave cream. Its One Wipe Charlies, so named, are designed specifically for men’s needs in the toilet.

One of the most important factors in Dollar Shave’s success has been the shift during the past decade to shopping on mobile devices. A surge in the penetration of tablets following the launch of Apple’s iPad in 2010 has also boosted the take-up of subscription services, says Nicholas Micallef at market research house Euromonitor.

Indeed, such is the volume of subscription services today that a new industry of comparison sites, such as Mysubscriptionaddiction.com, has sprung up to guide consumers. Replete with reviews and special offers, these sites channel even more web traffic to the subscription sites.

As for Dubin, he did not stop with one video. Another witty skit followed, this time without him as the front man but involving a security guard with a stun gun shooting a customer who complains, albeit mildly, about lack of access to the blades locked away in the shop’s glass cabinets.

Dollar Shave Club has not been the only underdog in its sector. In the UK, for example, King of Shaves, a male style and grooming range, started out as a challenger to the conglomerates 24 years ago. But it is Dubin’s connection with his customers via social media that has made the difference for his company.

The impact on the industry leaders became noticeable as online sales took off. Market share for Procter & Gamble, owners of the Gillette brand, has hardly grown since 2011. Meanwhile, private-label brands have doubled their share. No brand has matched Dollar Shave Club’s rapid growth during the past seven years, however. Dubin’s 3m subscribers spent a reported $160m last year.

Yet Gillette still held 64 per cent of the market at the end of 2015. The global number two, Edgewell, whose brands include Schick and Wilkinson Sword, has about a fifth of Gillette’s share, making it difficult for even a fast-growing near unicorn start-up to compete, at least on its own. 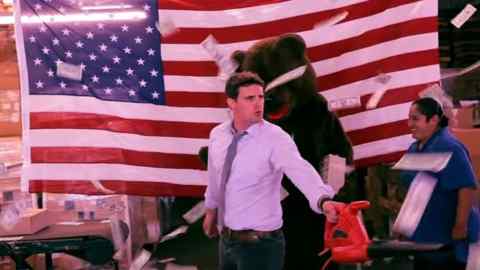 Dollar Shave Club attracted plenty of attention from venture capitalists. By the end of 2015 it was on its way to a $1bn valuation after raising $90m (up from an initial $75m) during the second half of that year. Eventually, another consumer giant, Anglo-Dutch Unilever, showed an interest. The group, which claims its brands are present in 98 per cent of households in the UK, had one significant gap in its portfolio, namely shaving products.

An initial plan to take a stake in Dollar Shave Club turned into a full takeover last July for $1bn — hardly a steal at five times estimated 2016 revenues but reflecting Unilever’s expectations for this most basic of men’s grooming products.

From nothing Dollar Shave Club had built a 1 per cent market share in just three years. Indeed, all of the alternative brands — including Dubin’s start-up — took nearly four percentage points of market share from Gillette and Edgewell during that time. The global market for men’s razors and blades is worth $15bn, according to Euromonitor, only about a fifth of which is in the US.

At the same time, Unilever was looking to build on what Dubin seems to do almost effortlessly: connect directly to the consumer. For multinationals such as Unilever, the most obvious path to its customers has been via leading retailers such as Walmart.

Unilever’s likely strategy will be to take Dollar Shave Club into as many markets as possible, including emerging economies such as Brazil and India, whose shaving products markets together are forecast to expand by $620m over the five years to 2020, according to Euromonitor, representing nearly half of the expected expansion globally.

Among the key attractions for investors were Dubin’s irreverent marketing and sense of purpose with his back-to-basics approach. The latter point has been the subject of research by Harvard Business School. In conjunction with consultancy EY, it studied the efforts of 1,349 emerging entrepreneurs (their companies all less than five years old) during the past three decades, concluding that a sense of purpose is crucial to winning customers over.

Simply surviving Dollar Shave Club’s early period in business also reflected well on Dubin. So rapid was its initial growth — frenetic weeks of furiously packing boxes to send out on time to customers — that the business could easily have wrecked its reputation just as it was starting out. Dubin’s effective management of early growth is another thing that will have attracted investors, including the multinational that ultimately took it over.

Dubin’s gamble was that people would be prepared to pay for his blades in advance. He also felt that a delivery service would add value and convenience for his customers. “It was my idea from the beginning,” he notes when asked about the decision to go with his “SAAS” (shaving as a subscription) approach.

Did the predictability of recurring revenues also give the business an advantage? Up to a point, he says, though he admits such revenues were not necessarily predictable. “A lot of entrepreneurs find subscriptions attractive because in theory you have a consistent cash flow,” he says. “But that’s not always sustainable if you’re selling something that people want and don’t need.”

In Dollar Shave Club’s case, customers have both wanted and needed its service, and it has not reached that breaking point where customers do not renew subscriptions because they see the product simply as a luxury rather than essential.

Another key to survival is diversification of product lines — few such businesses prosper in the long term by selling a single product. Quite a few razor companies offer other skin care products. Edgewell, for example, bought the popular Bulldog line of men’s skin care products late last year. Dollar Shave Club, then, should find there is mileage in its One Wipe Charlies and other extras.

Supported by another comically informative video, Dubin will no doubt be hoping the market backs his latest niche idea.