Siri Hustvedt: ‘I think of the sirens as New York’s heartbreaking music’

The writer on coronavirus, death tolls and the dangerous rhetoric of Donald Trump

From the house I share with my husband in Brooklyn, there is little to see these days except the empty street and the occasional masked, forlorn pedestrian. But as I sit at my desk and write, I hear the sirens all day.

Every alarm signals a person in crisis, and that person’s fate is inevitably bound to the fates of others — family and friends. It is a noise that deserves moral attention.

I have come to think of the sirens as the city’s heartbreaking music, a high-pitched dirge that accompanies the number in the newspaper every day: 731, 779, 799. As grim as the daily count of corpses in New York State may be, it seems it was too low.

Until recently, New York City has not recorded the cause of death as Covid-19 unless the person was tested. Those who died at home were not tested, and there are many of them. On April 12, the number fell. There is talk of “a plateau” and a “flattened curve” — human suffering charted on a graph.

I have lived in this dense, jostling city for over 40 years, and it is surely a testament to our new reality that I find myself longing to push through the door of the Q or F or No 2 train with a hundred other people and stand tightly pressed against shoulders, heads, elbows, knees, oversized packages and bulbous backpacks as I breathe in the smell of sweat mingled with the pungent and vague culinary odours that waft through the car.

On March 11, five days after I taught my seminar in narrative psychiatry to psychiatric residents at Weill Cornell Medical Center in Manhattan, visited a department store, walked 20 blocks with hordes of fellow New Yorkers and took three taxis (I avoided the subway because the virus had arrived), I fell ill with something. My husband came down with the ailment a few days later. The symptoms lingered for a while, but they were never serious. We recovered.

On March 22, a friend forwarded a tweet from a physician alerting his colleagues to a fellow doctor who had tested positive for the virus. The man had chest constriction, cough, severe headache, body aches but no fever: an exact description of my symptoms. Our family physician suspects we had it. He suspects he had it. None of us had access to a test.

“Anybody that wants a test can get a test,” Donald Trump told reporters on March 6, the same day I was out and about in Manhattan.

Just as they did during the yellow fever epidemic of 1795, the cholera epidemic of 1832 and the flu pandemic of 1918, moneyed New Yorkers have fled town for their country houses to wait out the scourge, leaving behind the crowded and vulnerable poor who cannot afford “social distancing”.

According to Merriam-Webster, the term “social distancing” was born in 2003. When words and images “go viral”, they spread with the speed of a highly contagious virus across media to infect millions. The metaphor is apt. For a brief time, a viral message is alive in its readers and viewers and becomes a form of mass cognition. The metaphor viral for this form of speedy and voluminous communication might be said to once have had its own viral character, which began about 10 years ago. It is now part of the English language.

A literal virus is a biological zombie. It occupies a borderland between the dead and the living. Virologists argue about whether to categorise it as one or the other. Although viruses are composed of the same nucleic acids found in our own cells, they cannot reproduce without a host organism — the host brings them to life.

Viruses are a ubiquitous part of the biosphere. They are inside and outside us. The human virome consists of all the viruses in our bodies and plays an essential role in our immune responses. Some viruses benefit their hosts. Others kill them.

The language we use to talk about a real infectious disease matters. The governor of New York, Andrew Cuomo, who holds a daily briefing for the state’s citizens, has been forthright about the present dangers and clear about safety measures. He has also shared with the public what remains unknown and has demonstrated compassion for people who are ill or working on what has come to be called “the frontlines” — people in hospitals and grocery stores, people delivering mail and packages and retrieving our garbage.

The contrast between his language and that of the president of the United States is more than a matter of style. In February, Donald Trump suggested that Sars-CoV-2 could be banished by magical thinking. It would “disappear” “like a miracle”, perhaps in April. He referred to the virus as “their new hoax”, a deception presumably perpetrated by Democrats to discredit him.

He personified it as the “Chinese” virus, a figment with possible Mexican relatives. “We need the Wall more than ever!” he tweeted on March 10, echoing a tweet from the founder of the rightwing group Turning Point USA.

Trump has repeatedly suggested that closing national borders and stopping air travel is an efficient method for halting the spread of the virus. On January 31, he barred most foreigners who had visited China from entering the US. He then claimed the virus had been “pretty much shut . . . down”.

At a rally on February 28, he said: “Border security is also health security.” For years, he has employed metaphors of immigrants as biological contaminants that infect the white body politic with their impurities. In a 2015 speech, he turned “Mexican immigrants” into a mysterious liquid force: “tremendous infectious disease pouring across the border”.

The president’s immigrant-as-pathogen rhetoric has a long and ugly history in the US. An article in The Saturday Evening Post from 1923 by WT Ellis may stand as exemplary. Immigrants constitute a “stream of impurity” and “a tide of pollution”.

In 2018, the American Journal of Public Health published “The 1918 Influenza Pandemic: Lessons Learned and Not,” a series of articles on how to prepare for the coming pandemic. (That same year, the Trump administration largely disbanded the pandemic response team.) In their introduction to the papers devoted to the topic, Wendy Parmet and Mark Rothstein identify the three “leading threats to global public health” as “hubris, isolationism, and distrust”. 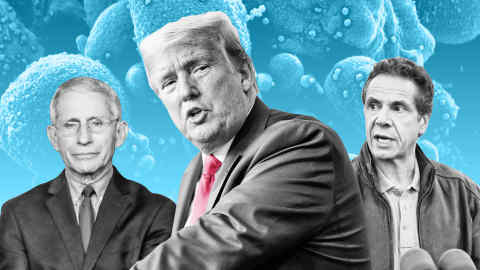 The hubris is scientific and technological — a faith in fancy new tools. We do have high-tech tools but, as the authors point out, they are “woefully ineffective” in halting the spread of influenza and, I will add, coronaviruses. Isolationism is the naive belief that closing a nation’s borders will keep a virus at bay.

“Xenophobia, rather than science,” they write, “helps to explain the call for travel bans.” Distrust is a loss of faith in government, journalism and science. The US, which has the highest number of deaths from Covid-19 in the world, is a country riddled with distrust.

Viral figures of speech have collided and mingled with an actual virus. “We, all of us, grave or light, get our thoughts entangled in metaphors and act fatally on the strength of them,” George Eliot’s narrator famously said in Middlemarch.

‘The US, which has the highest number of deaths from Covid-19, is a country riddled with distrust’

The body politic is a metaphor for a collective entity — the nation. Human beings are not viruses, even though viruses are, in fact, part of all of us. The human virome is in intimate interaction with the bacteria in our bodies, the microbiome. We need these fellow travellers to live. Every person is a multiplicity, a community of symbiotic relations that includes a diversity of DNA. In light of this, philosophers of biology have begun to question how to draw the lines between “us” and “them” and whether such divisions make any sense at all.

The human body is an ecosystem that depends on the ecosystems around it. And we are social animals, heavily dependent on others like us for our survival. The pandemic has surely brought home how dependent every one of us is on the elaborate societal arrangements that sustain us, from running water in the tap to food on the grocery store shelves.

And this is where the irony becomes most acute. The political rhetoric of closed borders and impenetrable walls, of “lock her up” and “send her back”, of shutting down and shutting out, of purity and impurity, of us versus them, this language of hubris, isolation and distrust in the midst of a public health emergency, is killing people. It is a rhetoric that articulates a pernicious fantasy of the isolated, autonomous person who gave birth to himself and needs no one.

The lone cowboy, the self-made man, the rugged individual are American iterations of this fictional being, inevitably a male, white being. The nightly instalments of The Donald Trump Show, disguised as briefings on the coronavirus, during which the Commander in Chief boasts, swaggers and punches, but never betrays the slightest sign of empathy for another person or guilt for his own actions, serve as the perfect theatrical embodiment of a ruinous ideology.

The failure of the Trump administration to prepare for an inevitable pandemic, to listen to virologists, epidemiologists and public health experts, and to act decisively and quickly when the threat arose; the incompetence, chaos and lies that have accompanied decisions; the lack of tests, ventilators and protective gear that would have saved lives, are the direct result of an ideology, which, along with its xenophobia, racism and misogyny, is profoundly anti-intellectual.

The income inequality that has been growing in this country since the 1970s and the brutal racial disparities of our private healthcare system have become only more visible during the pandemic. I think this deserves moral attention.

There will be an end to the pandemic, although we don’t know what that will look like now. They say more than 20,000 New Yorkers died when influenza swept through the city in 1918. The estimate for the global death toll that year is 50 million. In the US, most people forgot about it.

I suggest we not forget this pandemic, if only because our ecosystems are vulnerable. I suggest the virus that leapt from an animal to a human being sometime last year has made it clear that we are inextricably entangled with, and dependent on, one another and must also co-exist with other mammals and birds and insects and plants and bacteria and viruses on this small and fragile earth.