In a Paris suburb, Macron’s victory over populists is fragile

Since January, three European elections have produced results that have upended conventional wisdom and defied expectations. Why did this happen and are there links between them? In the latest update to our Europopulists series, we visit three places — Garges-lès-Gonesse in the Paris suburbs, Colne Valley in the north of England and North Amsterdam — to find out how the political ground is shifting

‘People feel abandoned. They haven’t found anyone who represents them’

Like many of the citizens in Garges-lès-Gonesse, a poor suburb just north of Paris, Hind Ayadi voted for Emmanuel Macron in France’s recent presidential election. Her ballot helped the liberal reformer capture more than 80 per cent of the town’s vote, contributing to a historic national landslide in which the rightwing Marine Le Pen was swept away.

But it would be wrong to think that Ms Ayadi, a 37-year-old artist, or the town she has lived in since she was three, have any special affection for Mr Macron — or even modest expectations for his presidency.

The one politician who ignited something like passion in Ms Ayadi was Jean-Luc Mélenchon, a leader of the far left who has made common cause with the Communists. She voted for him in the first round of the presidential election. So did many other Gargeois. So many that Mr Mélenchon, who advocates redistribution of wealth on a mass scale and withdrawal from Nato, emerged to win the first round of the vote in the town — beating not only the traditional centre-left and centre-right parties that have long dominated French politics — but also Mrs Le Pen and the upstart Mr Macron.

“People identified with Mélenchon more than the others,” Ms Ayadi said when asked to explain his appeal. “He speaks like a real person.”

Mr Macron’s May victory over Mrs Le Pen reverberated far beyond France: across the west it was interpreted as the moment when a rising populist tide that delivered Brexit and then Donald Trump was at last pushed back.

Yet a closer look at places like Garges suggests otherwise. It reveals the fragility of Mr Macron’s victory and the limits of his movement. The French electorate still feels unsettled and restless — a point underscored by the new president’s sudden slump in opinion polls (and that is before the fight begins in earnest in September over his planned labour market reforms).

The anger that propelled Mrs Le Pen may have dispersed but it has hardly disappeared. Even close Macron supporters worry what comes next if the new president is unable to deliver on his promise of national revival.

“If Emmanuel Macron fails, the next election will be between Marine Le Pen and Mélenchon,” predicted Nicolas Bouzou, an economist. “I’m scared about that.” Mr Bouzou was sitting in an office near Les Halles, in central Paris, where the late-afternoon sun was pouring in and the ancient and modern blended easily. The marble fireplace and parquet floors were joined by translucent plastic chairs. Walter Isaacson’s biography of Steve Jobs rested on a bookshelf beside heavy tomes on monetary economics.

For the president to prevail, Mr Bouzou argued, he must generate growth to ease France’s chronic problem of employment before the next poll. That meant undertaking big changes now to labour laws and education that are bound to prove unpopular. The new president appeared hesitant, Mr Bouzou fretted, prompting the economist to appeal to him directly by text message.

Read the other articles:

“It’s a mistake,” he warned, to think the May election had ended the populist threat in France. Rather, it was shifting from Mrs Le Pen to the other end of the political spectrum, where Mr Mélenchon and the far left were “now for me, the main opposition to the government”.

“In this kind of period, the wind is favourable to populism,” said Mr Bouzou. “You can maybe stop the expansion of populism but not eliminate it.”

Garges is only nine miles away from Mr Bouzou’s office. Yet, as the locals will repeatedly tell you, it has “nothing to do with Paris”.

Once an agricultural village with just a few hundred residents, today it has more than 41,000, many of whom were born elsewhere. The immigrants first came from Spain during the civil war and Portugal. There have been many waves since: from Algeria, the Indian subcontinent, sub-Saharan Africa, Turkey and eastern Europe. The most recent is from Sri Lanka.

Stepping off the train from the Gare du Nord, it feels like the anti-Paris: there are scarcely any cafés or restaurants to arouse the senses, no shop windows to browse — not even a greengrocer in sight. Men stand in languid clusters, some roasting corn on the cob to sell.

The town’s defining feature are the seemingly endless rows of apartment blocks, built en masse in the 1960s and then in subsequent bursts of urban regeneration. Some are colourful, some monotone; some have protruding balconies cluttered with mops, old bicycles and refrigerators; some are sheer. There is cladding and bare concrete; towers and blocks. Tidy spaces and messy ones. This is the banlieue, the home of France’s underclass.

“Today, our neighbourhood is in real trouble, with people who are truly poor,” said Maurice Lefèvre, the mayor since 2004, noting that about 40 per cent of the population was under 25.

A former sailor from Normandy, who sports a white captain’s beard and an office decorated with maritime memorabilia, Mr Lefèvre jokes that he is now landlocked in central France. He describes a community with a similar sense of being stranded: there are no companies of any size in Garges. The biggest employer is the local council. There are jobs at the nearby Le Bourget Airport, but most residents do not have an easy way to get there or much confidence that they won’t be discriminated against if they do.

Mr Lefèvre bristles at the term “integration,” but acknowledges it is a challenge. “There are young people here who when they are in Algeria don’t feel Algerian and when they are in France they don’t feel French. But they have both passports. So what do they do?” he asked.

The mayor has been lobbying for the extension of a tramline to connect Garges to employment. He has also started an online news channel to publicise the goings-on in a part of the city that otherwise tends to feature in the news only for fires or violence or the arrest of someone with suspected extremist ties.

A more immediate project to soften Gargeois life is the Garges Plage — or Garges Beach — that the town puts on each summer. It is actually a stretch of faded grass with a bouncy castle, football tables, music, volleyball, a small petting zoo and other attractions for families who cannot afford the French right of a summer holiday.

These were the sorts of people one could imagine the Socialist party out signing up. But Nathalie, one of Garge Plage’s organisers — and a local resident — shrugged at the suggestion as she showed me around.

“The traditional parties haven’t renewed themselves. They still have the same people in place,” she said, trying to explain how the centre-right Republicains and the Socialists lost nearly half their share of the vote in Garges in the election. Nearby, boys pedalled go-karts around an uneven racetrack.

Better-educated voters deserted them for Mr Macron, Nathalie guessed, while others flocked to Mr Mélenchon.

Roberto Ramos, the pastor at the church in Sarcelles, which borders Garges, remembers election day and the absence of fanfare. When Nicolas Sarkozy and François Hollande won the presidency in 2007 and 2012, supporters chanted in the streets and honked car horns. “With Macron . . .” he said, and then shook his head.

Everyone was disappointed [by the Socialists]. Now we don’t have any expectations for Macron

More telling to Mr Ramos was the energetic campaigning for Mr Mélenchon — “his posters were everywhere,” he recalled — and another candidate: Samy Debah, who was running in the local legislative elections. A history teacher and campaigner against “Islamophobia”, Mr Debah drew strong support from Muslims to win more than half the vote in Garges even though he lost in the wider district to a well-known Socialist.

“In both cases, it’s the same phenomenon,” Mr Ramos said of the passionate backing for two fringe candidates and the erosion of the mainstream parties.

In places like Garges he sees a contradiction: residents care deeply about political issues that are among the nation’s most urgent: unemployment, integration, transportation and affordable housing. Yet they feel disconnected from political life and the mainstream parties that have long organised it.

“They do not trust political figures and they don’t care about political life. So why would they support pro-system parties, given their levels of poverty, unemployment and despair?” he asked. “[Mélenchon] says ‘f**k the system’, which is an important criteria.”

In Mr Mélenchon, he found many parallels with Jeremy Corbyn, the ascendant leftwing leader of Britain’s Labour party. Both men have endured a beating from the press, which seems to endear them to voters who, themselves, feel beaten down. Both are cool to the EU, which they tend to view as a neoliberal project. Both exude authenticity. “It’s so similar,” Mr Guénolé said.

The plight of the banlieue was a big issue in both the Sarkozy and Hollande elections, with the riots that engulfed many areas in 2005 serving as a touchstone. Yet, as Mr Guénolé noted, it was peripheral this year. “There’s a divorce,” he concluded, between wealthier citizens who no longer want to hear about such places, if they can help it, and residents who have given up on the state.

Mr Macron visited Sarcelles in April, but the occasion was viewed by Ms Ayadi and Ibrahim Camara, a 24-year-old Guinean who works with her, as a photo opportunity among the poor for a former banker.

“He came to play football with kids and show that he’s interested,” Mr Camara said, rolling his eyes. “Then nothing.”

The vibrant space they have created in a ground-floor flat in an otherwise nondescript block is both a revelation and an act of defiance against the blandness of Garges: it is filled with painting and photography and Ms Ayadi’s sewing. One of their projects is an online magazine about the neighbourhood produced by its youth, called urbanstreetreporters.com. It deals with everything from music and fashion to cyberbullying and extremism.

“I responded to a need in the neighbourhood,” a somewhat reserved Ms Ayadi explained, noting that nothing similar existed when she was growing up.

Her parents came to France from Morocco. The family lived in a small apartment in the 15th arrondissement, until her father heard in the 1980s about the big developments in Garges and the possibility of a larger home. Now she cannot imagine moving away from a place she describes as “a little like a village”.

Like much of France, she felt let down by Mr Hollande. “When the Socialists were in power people were really looking for a change because they are supposed to care about people,” Ms Ayadi said. “But everyone was disappointed. And now we don’t have any expectations for Macron.”

Mr Lefèvre, the mayor, expressed a similar sentiment about the new president’s prospects. “The French put a lot of hope into the election of Mr Hollande, and now they’ve done the same thing with Macron,” he said. “But we saw what happened with Hollande.”

Meanwhile, Mr Mélenchon’s appeal is clearly growing in Garges, particularly among the young. So too, it seems, is abstention and a disconnection from politics altogether.

Explore the series
READ MOREThe Europopulists
In a Paris suburb, Macron’s victory over populists is fragile 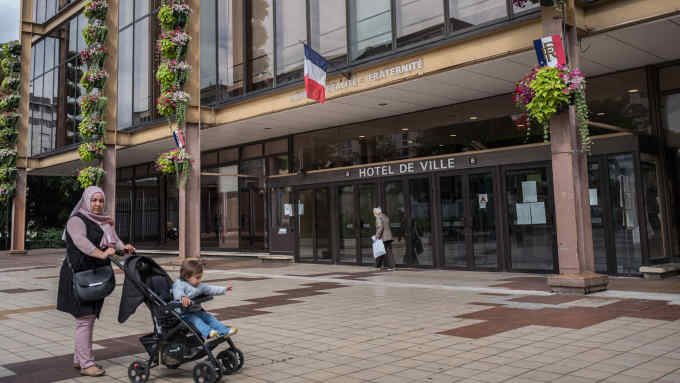