The Federal Bureau of Investigation has reopened its probe into Hillary Clinton’s handling of secret information.

In July James Comey, FBI director, criticised the “extremely careless” way Mrs Clinton and her aides treated classified information in emails sent from a private server, but recommended that no criminal charges be brought.

Here’s a reminder of the original probe.

What the FBI did

The FBI conducted a year-long investigation into whether classified information had been transferred via a personal email server Mrs Clinton used when she was secretary of state.

The probe came after the Intelligence Community Inspector General asked for a review into whether classified information was transmitted during Mrs Clinton’s use of a server kept in her house in Chappaqua, New York.

The FBI investigation required thousands of hours of work as investigators pieced together evidence of how Mrs Clinton used personal email for government work. Investigators read approximately 30,000 emails provided by Mrs Clinton to the State Department in 2014. The FBI also discovered several thousand additional work-related emails that were not in that body of 30,000 messages she provided.

Piecing together the email fragments “was like removing the frame from a huge finished jigsaw puzzle and dumping the pieces on the floor”, Mr Comey said.

What the FBI investigation found

Mr Comey said his staff had not found clear evidence that Mrs Clinton or her staff intended to violate laws governing the handling of classified information.

There was, however, evidence that she and her team had been “extremely careless” in how they handled sensitive information, the FBI director said.

Seven email chains were related to matters that were classified at the Top Secret/Special Access Program level when sent and received, for example. None of the emails should have been on any kind of unclassified system, the FBI said. 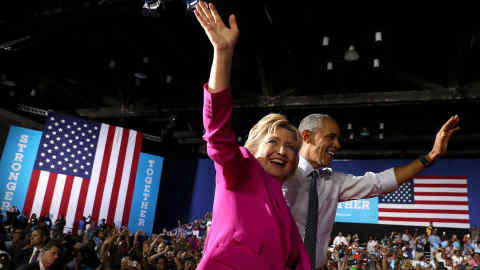 While only a handful of the emails bore markings suggesting they contained classified information, people who knew or should have known the subject matter was classified were still obliged to protect it, Mr Comey said. Mrs Clinton has said that she did not send or receive any information that had been marked as classified when it was sent.

The FBI also found that Mrs Clinton used not one but several different servers during her four years at the State Department, as well as numerous mobile devices to view and send email on that personal domain.

The agency also found evidence that the security culture of the State Department in general was lacking when it came to handling secret information.

The FBI did not find any signs that Mrs Clinton had been hacked — but it would be difficult to find clear indications that this had happened in any case, Mr Comey said. “We assess it is possible that hostile actors gained access to Secretary Clinton’s personal email account,” he said.

Why there was no recommendation to prosecute

Despite evidence of careless conduct, Mr Comey said the FBI was not recommending that the Department of Justice bring criminal charges. Indeed, no reasonable prosecutor would bring such a case, he said.

This is because a trawl of past investigations into classified information showed that past cases had involved either intentional and wilful mishandling of secret material, or the exposure of “vast quantities” of information pointing to intentional misconduct, or signs of disloyalty to the US. There were not signs of this in the Clinton case, Mr Comey concluded.