Is your skin overloaded? Call in the probiotics

Fermentation and ‘good bacteria’ are beauty’s new buzz ingredients. We look at the yeast you can do

Do you always choose sourdough over granary? Is your fridge stocked high with kombucha? Have you been known to dollop kefir on your morning granola? If so, you’re likely already au fait with the benefits of fermentation and probiotics. But the so-called “good bacteria” craze doesn’t stop at what you put in your body, with devotees and brands claiming that topical treatments could help with some of the most troublesome chronic skin conditions such as acne, psoriasis and eczema.

La Mer, of course, was an early proponent – its Crème de La Mer, launched in 1965, contains fermented seaweed – but only recently have other big names started making a play towards probiotics. Estée Lauder’s Futurist Hydra Rescue Moisturizing Makeup SPF45 boasts probiotic technology (£36), and Clinique uses lactobacillus ferment in some products from its Clinique iD Moisturiser range (from £38). Meanwhile, many indie brands have become known because of their probiotic products, such as Aurelia Probiotic Skincare Miracle Cleanser (from £22) and Vintner’s Daughter Active Treatment Essence (£210).

Research into the effects of probiotics, while exciting, does not yet offer definitive answers. “Probiotics are living microorganisms within and on our bodies that aid in promoting overall health. Prebiotics, on the other hand, are a form of dietary fibre that act as food for probiotics to consume,” explains Esther Olu, a cosmetic chemist who goes by the moniker The Melanin Chemist on Instagram. “Cosmetic formulations don’t need both to be efficacious; however, they work better together as they have a synergistic effect on the skin. Ferments, on the other hand, are essentially postbiotics. They are by-products of probiotics that can be used to improve the skin. Studies have shown that they may be essential in inflammatory conditions, as well as gut homeostasis,” adds Olu.

Much like the gut microbiome, the skin microbiome is the biological community of billions of microorganisms including viruses, fungi and, of course, bacteria. This ecosystem can control everything from how well products are absorbed to overall skin health – and some scientists believe that the more diverse the population, the healthier it tends to be. “The microbiome is essentially the skin’s first line of defence, so when that is disrupted, it leaves skin open to invasion by pathogens and harmful bacteria. The addition of probiotics and prebiotics could potentially maintain and improve overall skin health,” says Olu.

Some studies have shown variations in the microbiome population of those with eczema, acne and dandruff versus those without. The popular explanation for this change in diversity is usually the stresses of modern life, but as consultant dermatologist Dr Anjali Mahto says, we should not be too quick to assume connections where they may not exist. “Our diets have changed massively over the past 50 to 100 years, as well as there being far greater pollution now than ever before,” says Dr Mahto. “It’s too simplistic to lead everything back to the microbiome.” Likewise, she points out the fundamental difficulties with using probiotics in topical beauty products: they have an incredibly short shelf life and need refrigeration to stay potent. What’s more, the microbiome is not a monolith. It’s like a fingerprint, so you would not find total symmetry even in the gut microbiomes of two identical twins. “They are hugely individual and are composed of simply trillions of bacteria, yeast, fungi, etc,” says Dr Mahto.

However, where there’s a will, there’s a way, and the beauty industry is constantly innovating ways around these roadblocks. L’Oréal has taken out a variety of probiotic patents for a number of the brands in its portfolio, including affordable skincare line La Roche-Posay. The brand’s Effaclar Duo (+) Blemish Treatment (£17) contains prebiotics, which it claims can help decrease an overabundance of staph bacteria on the skin, a trait they observed occurring in those with mild to moderate acne. The Lipikar range (from £7.50) for eczema and dry skin contains a similar staph-limiting complex and a further patented ingredient called Microresyl that the brand claims supports bacterial diversity.

Allies Of Skin uses probiotics in a number of its products, including the Molecular Saviour Probiotics Treatment Mist (£57). “The probiotic, while inert, is still effective in stimulating the production of b-defensin, which is a healing enzyme that your skin naturally produces,” says founder Nicolas Travis. “While it’s true there are innumerable strains of probiotics, most of them have only been tested in vitro, not in vivo. We selected our strains from this smaller group as we felt the research was far stronger.” Travis says he was less interested in finding ways to use live probiotics than he was in exploring what can be done with prebiotics and inert probiotics, adding: “What we have realised with our formulas is that inert probiotics have a great ability to stimulate the skin’s natural defences.”

Meanwhile, The Nue Co’s latest additions to its line-up of supplements and wellness products are the Barrier Culture Cleanser (£30) and Barrier Culture Moisturiser (£45). According to Jules Miller, founder and CEO, the formula was created at a world-leading facility in Sweden using a unique probiotic stabilisation process involving heat-treating to keep the bacteria “live”. Barrier Culture is designed to help desensitise the skin and repair the so-called “skin barrier”, acting to boost moisture while reducing oiliness. Miller devised The Nue Co’s gut-health supplements – some of which remain its bestselling products – because of her own gut-health problems. “I think we’re just scratching the surface in terms of understanding how our microbiome functions as part of our health system,” says Miller. “The leaps and bounds we’ve taken in the past five to 10 years in our understanding is phenomenal.”

“I would describe myself as cautiously optimistic about probiotics,” adds Dr Mahto, who suggests using such ingredients as a string in your bow, rather than in place of more robustly proven ingredients such as salicylic acid for blemishes or vitamin C for brightness. Travis also notes that, unlike ingredients such as retinoids, probiotics are safe for use in pregnancy and breastfeeding, as well as being unlikely to cause irritation.

The best beauty buys of 2020
The great beauty reset: how to reboot your skin 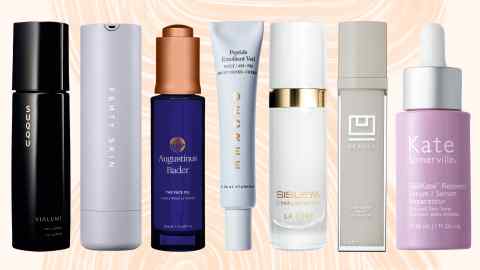 Although there is still debate around the cause of an increase in chronic skin conditions, which reportedly take up a quarter of all GP visits in the UK, one thing that is generally agreed upon is that many consumers are quite simply using too many products. “People do too much to their skin. If you look at how many layers of product people are applying, there is a genuine issue where they are disrupting their skin barrier too much,” says Dr Mahto, citing exfoliating peel products as oft-overused. Miller agrees, saying that part of her motivation to create Barrier Culture was in response to the inflammation and damage to the skin barrier that she believes excessive skincare layering can bring. When it comes to beauty, indeed, less is more.