How I Spend It: Kate Summerscale on the magic of playing cards

My parents were fussy about their playing cards. At the formal bridge parties that they hosted for other diplomats in Chile in the 1970s, the decks had to be perfectly smooth. Each card was glossy and supple, each back identical to the next. When shuffled, they slipped off each other with a shush, fluttered together,pattered and clacked. They were kept in lacquered boxes with thin wooden partitions and fitted lids. And if a single card’s corner was bent or scuffed, the whole deck was banished to a drawer.

We used these cast-off cards when I learnt to play bridge, aged about eight. The lessons were sometimes fraught – my father would become exasperated by my mistakes, my mother would rebuke him for being too hard on me – but the pattern of the game could iron out our differences. Once I got the hang of it, there was a lovely rhythm to putting down the cards, gathering tricks, letting a hand work itself out. You could feel that you were a vehicle for the game’s luck and logic, as if the cards were playing you.

I next played bridge (or a half-remembered version of it) on a 12-week trip to Greece with friends when I was 18. The four of us whiled away the evenings with cards in tavernas before rolling out our sleeping bags on the beach. My bridge partner and I were the weaker players, but he was a bold and ingenious cheat so we sometimes won anyway. I don’t have a pack from that trip, but I have cards from many holidays that followed, wine-stained, bag-bashed and sand-scoured: Crete (with a brightly coloured map of the island on the reverse), Italy (the national flag), Turkey (a ruin), Crete again (a grinning fisherman with a big pink flower hooked over his ear).

Being so compact, cards survive house moves and spring cleans as well as international voyages. Mine are now stuffed into a deep shelf in a kitchen cupboard, strapped with elastic bands and bulging from torn packets. I like them this way: dog-eared, nicked, spattered. These are cards that have been out and about. They have been slapped down in Beggar my Neighbour duels at lonely Mexican bus stops. They have been brooded over in epic tournaments of contract whist on Spanish balconies, surrendered to beady children in airport games of Go Fish, scooped up triumphantly in rounds of Gin Rummy at Croatian harbour bars.

Along with the holiday packs, I have a French deck that I took from the tiny room in Paris in which my great-aunt Phyllis lived for 60 years. I have several packs of Waddingtons Number 1. I’ve a Michelin set that I picked up in a junk shop in Norwich (the Michelin Man dons a dress to be a Queen, a goatee to be a King), and a Horrible Histories set from when my son was younger. I have a pack with German suits (acorns, leaves, hearts, bells) that a boyfriend found when clearing out the house of a Polish couple in north London.

HTSI
David Thewlis: ‘The messier a page is, the better it usually is’ 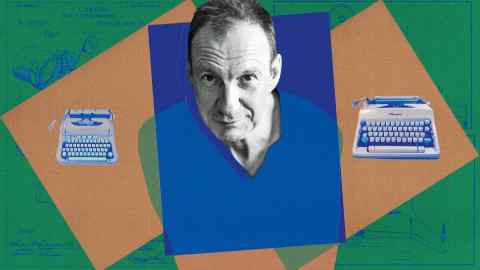 Playing cards have a fairytale quality. In conjuring tricks, they vanish and reappear, as if they can travel through time or space. In the hands of fortune tellers, they lay out the future. The court cards in Lewis Carroll’s Alice’s Adventures in Wonderland are imperiously anarchic. “Off with her head!” cries the Queen of Hearts, impatient as my father, while the softer-hearted King hurriedly dispenses pardons to the condemned. My newest pack of cards, a gorgeous deck produced by the comedian Tim Key, has something of Carroll’s absurdist glee – and something of a magician’s time-slipping tricks. A few of the cards record telephone exchanges between Key and his friend Emily Juniper, who designed the deck.

“I want to have a conversation about Jacks,” says Key, in a discussion transcribed on the nine of Hearts. “I think we should have illustrations of Jacks, do you know what I mean?”

“What are you talking about?” asks Juniper. “What time is it?”

“So each Jack has a famous Jack,” he explains, “like one is Jack Nicholson.”

“And another one,” he continues, “is like, I dunno, Jack Wilshere, you get the idea.”

The Jacks are thus adorned.

I have two Japanese decks, decorated with golden fans, that I found in my mother’s house when she died in 2007. She and my father must have used these cards in the months before her death – though long divorced, they had started to play bridge together again. My mother’s cards are a little battered now, but they are the least melancholy of mementoes. They are scratched and worn only because they are still in use, after all: still in play.

The Haunting of Alma Fielding by Kate Summerscale is published by Bloomsbury at £8.99