Scientists have sounded the alarm after levels of methane in the atmosphere reached a record high, a development that could cause an unexpected acceleration in global warming and put the world further off course from the goals of the Paris climate deal.

New data from the National Oceanic and Atmospheric Administration of the US showed that concentrations of atmospheric methane surged last year and accounted for about a sixth of the atmosphere’s capacity to trap heat.

“Methane’s unexpected rise is a major challenge to the Paris agreement — and we don’t know why it’s happening,” said Euan Nisbet, earth sciences professor at Royal Holloway University of London.

Methane, a potent warming gas, comes from a range of sources including wetlands, landfills, natural gas production and livestock — making it hard to pinpoint the exact reasons for the increase. One possible source of the rise is from tropical wetlands, where warmer temperatures may be increasing the level of microbial activity, resulting in more emissions and creating potential feedback loops.

“Much of the rise seems to be coming from the tropics,” said Prof Nisbet. “It looks very much as if the warming is feeding the warming, but exactly how is a major puzzle.”

But methane is much more potent on a weight basis, with roughly 25 times as much warming impact, pound for pound, as carbon dioxide, even though it does not stay in the atmosphere as long.

Ed Dlugokencky, the chemist who leads the NOAA monitoring programme, said the warming impact of the increase in atmospheric methane since 2007 was roughly the same as the impact of two years of carbon dioxide emissions.

However, he said it was “difficult to diagnose” what was driving the increase, because the sources of methane as well as the rate at which it degrades are both constantly in flux. “We can’t say with certainty why atmospheric methane is rising. It could be either an increase in emissions or a decrease in its loss,” he said.

Methane stays in the atmosphere for only about nine years, he added. “If you start reducing methane emissions now, you can start having a short-term effect on . . . reducing the drivers of climate change.”

Oil and gas production is another source of methane, the key compound in natural gas, which can escape into the atmosphere through leaks. 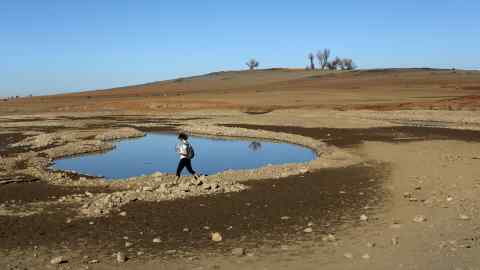 Carbon dioxide levels also hit a record high last year, largely due to increased fossil fuel consumption, raising concern over whether nations will be able to achieve the goal of the 2015 Paris agreement, to limit warming to well below 2C. The world has already warmed about 1C since pre-industrial times.

Two recent scientific papers have also raised the alarm on the effects of increasing methane concentrations, which started rising again in 2007 after remaining mostly flat during 2000 to 2007.

“Methane’s increase since 2007 was not expected . . . If the increase continues at the same rates, it may become very difficult to meet the Paris goals. There is now urgent need to reduce methane emissions, especially from the fossil fuel industry,” said a paper published in Global Biogeochemical Cycles in March.

Alex Turner, a researcher at the earth and planetary sciences department at University of California, Berkeley, said the sources of methane were “more elusive” than that of carbon dioxide, which is mainly produced by fossil fuel production.

But he said it was “pretty clear that this long-term rise in methane is driven by anthropogenic [human-caused] emissions”.