Getting wiggy with it: what’s with the hideous hair at SS20 men’s

Pompadours and periwigs were all the rage at London Fashion Week Men’s. Will the trend stick?

Every season, especially every menswear season, some form of trend emerges that seems destined merely for pillory and sarcastic send-ups, as opposed to actual life on the street. In the past, there have been beyond-microscopic shorts, and gargantuan, Lurchean shoulders — which, despite being gimmicks to attract attention and column inches (like these) did in fact wind up influencing the wider template of style.

For Spring/Summer 2020, however, it’s a tougher sell. Next season, it seems, the wig is big. They have been highly visible and, it seems, intentionally hilarious. Young designer Paria Farzaneh choose to literally disguise her models with terrifying grinning faces and identical bobbed black wigs. Martine Rose topped her clothes with hairpieces intentionally balanced askance, often showing inches of natural barnet underneath. When her first male model walked out with a blond bouffant and a mildly pained expression on his face, it was one of those rare moments of clarity, when even fashion journalists, inured to the rather more psychotropic aesthetics of certain leading designers, felt a twinge of Emperor’s New Clothes.

It made sense, incidentally, in Rose’s narrative, focusing on British subcultural style tribes. The wigs were, often, echoes of the female parts of those groups — in this case, possibly the Dolly Bird counterparts to Teddy Boys. And it certainly made for eye-catching pictures.

Wigs for men aren’t anything new — see Nicholas Hoult powdered and preened and periwigged as Robert Harley in Yorgos Lanthimos’ The Favourite, set in 1708 but following the fashion established by Louis XIV almost a century before. When Louis’s hair had started to thin, he took to wearing wigs and triggered a trend that swept the fashionable world, so that no man was considered properly dressed without a periwig. They’re now, generally, worn only for the solemnity of court proceedings, harking back to more civilised times — or on the catwalk, for a laugh.

Men’s hairpieces — or even just men and their hair, generally — is a loaded subject. It is the subject of pratfall-level comedy, of the old gag of a toupee flying from a balding pate in wind, perhaps into soup. It is a denouement, a comedic grand reveal, a comeuppance. It’s something lots of men pay a lot of money to avoid. There are multibillion-pound industries built around preventing hair loss, or at the very least covering it up, while a quarter of men in their twenties show signs of male pattern baldness. It affects 6.5 million males in the UK. Sophisticated types often resort to the orally administered drug Finasteride, which has a host of potential side-effects (erectile dysfunction included) but was nevertheless the 75th most prescribed medication in the US in 2016, with more than 10m prescriptions filled. Donald Trump takes it. He also allegedly had a “scalp reduction” in 1989, according to divorce papers filed by Ivana Trump. The hair on Martine Rose’s models, incidentally, was more akin to Ivana’s than The Donald’s.

So wigs for men are generally covert, often subject to ridicule. But there’s at least something intriguing about a wanton deviation from the short back and sides — about the peacocking of Rose’s blokes especially, whose masculinity wasn’t even impinged by a shock of Dolly Parton peroxide curls atop their head (OK, just a little). Maybe it’s talking about gender fluidity and openness, or the undercurrent of camp that the Metropolitan Museum of Art seems to have ignited with its 2019 Costume Institute show. Or maybe it’s about masculinity as a disguise, a farce, something to be adopted and discarded as easily as clothes. Interesting to muse over — even if I’m not sure this idea will catch wind. You wouldn’t want a wig to, after all.

Explore the series
READ MORE
London Fashion Week Mens SS20: Why fashion must be more than a meme 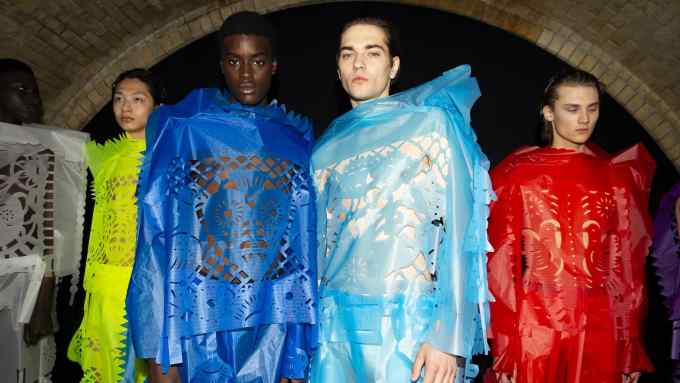