Student-turned-social entrepreneur Doris Woitschach has some simple advice: “Fall in love with the problem, not the solution. Always try to find your ‘why’ first and you will see how the ‘how’ will follow.”

Woitschach is one of the winners in the student-led project category this year. Her venture is one of a number of entries that left Darija Miletić, awards judge and co-president of the oikos International student organisation, “out of breath” at the diversity, innovation and awareness they demonstrated.

“As the daughter of a writer, I learned that if the lines don’t swallow your attention as a reader and drag you into the reality of the story . . . they are either not relevant or not interesting,” says Miletić. “While reading entries for this award, I couldn’t take my eyes off the sparks of change and evolution hidden behind each word.”

The problem being tackled by Woitschach is plastic, less than 10 per cent of which is being recycled, according to some estimates. Her solution is cassava, the vegetable that is a staple in Asia, Africa and Latin America. During processing, Cassava generates a lot of waste in the form of peel, which can be used in manufacturing.

Her company, UpRoot, makes entirely biodegradable, compostable, zero-waste drinking straws that are as durable and flexible as plastic ones, but do not have the same negative environmental impact.

Woitschach launched the company in 2021, with co-founders Jessica Gonzalez and JE Lu, while an economics undergraduate at National Chengchi University’s College of Commerce, in Taipei, Taiwan. Roughly 3bn single-use plastic straws are consumed in the country each year. UpRoot has set itself the initial target of selling 1.26mn straws, and in the process, preventing 2.8 tonnes of plastic waste and saving 2.3 tonnes of cassava root from being discarded.

“Every kilo of our product will replace a kilo of plastic and reclaim similar numbers of wasted cassava produce,” says Woitschach. “Economics will teach you the basics and also give you concrete tools for analysis. It’s a broad and complex subject, but it can be exciting and fun. It’s not just about numbers and percentages — it’s about using your knowledge to make business decisions that are in your organisation’s best interest.”

She says that the college’s support was critical: “It not only helped us connect to the right people, but also believed in us enough to sponsor us during some steps.”

UpRoot was a winner in the 2021 Hult Prize, the global contest that challenges university students to tackle social problems with their business. Some of the $150,000 seed capital won by UpRoot will be used to expand out of Taiwan and into the Americas, with a target of $20.5mn annual sales within five years. “By then, we will have improved our manufacturing process, reduced our fixed costs by 20 per cent and replaced 2mn kilogrammes of plastic,” says Woitschach.

“If you want to be a successful social entrepreneur, persistence is crucial,” she says. “You also need to know when to pivot — I’ve seen many [social entrepreneurs] so eager to get their ideas off the ground that they don’t pay enough attention to what’s working and what’s not.”

Michael Tekabe is another winner in this category who is focused on targeting plastic waste. After graduating from his MBA at ESMT Berlin, he enrolled on the business school’s Responsible Leaders Fellowship, where MBA or masters graduates offer pro-bono support to organisations meeting social challenges in lower income countries.

When he joined last March, Tekabe was the company’s third employee, after co-founders Penda Marre and Kidus Asfaw, who had just launched their venture in Ethiopia.

In his first few weeks as head of strategy and operations, Tekabe helped Marre and Asfaw structure their cash flow management and financial model. He was also given responsibility for developing the company’s organisational structure and culture. By expanding the team to seven, Tekabe helped Kubik form and nurture partnerships in the recycled plastic supply chain. He also helped the company secure funding as part of an affordable housing-focused incubator run by US-based non-profit group Habitat for Humanity and start-up accelerator Plug and Play.

The company has received $800,000 in investment commitments since Tekabe joined and having completed his Responsible Leaders Fellowship, he is now working full-time for the company at its new headquarters in Nairobi, Kenya.

“Helping to build the team at Kubik has been extremely rewarding,” says Tekabe. “Each individual’s work moves the company closer to the vision of building dignity through clean and affordable living for all.

“This [year] is a period where we will grow immensely, both from a headcount and pure operational perspective,” he says, referring to a factory, which Kubik hopes to commission in the second half of 2023.

“Remember that if you’re building an organisation, that’s very different to maintaining the status quo,” says Tekabe. “Your vision, strategy and proposition will at times feel far-fetched to certain people. The journey to your goal may be difficult, but in most cases, this is how real change happens.”

Awards judge Miletić says that “with projects like these, young people are getting on their feet, starting to walk the talk”.

David Even’s start-up is doing just that. Primal Soles is trying to tackle the problem of synthetic, non-recyclable shoe insoles, of which hundreds of millions of pairs are discarded each year, says Even. His Netherlands-based company makes sustainable insoles from natural cork.

According to Even, who studied for an MBA at SDA Bocconi School of Management in Milan, his is the first 100 per cent recyclable shoe insole on the market. “We also encourage customers to send back their used product at the end of its life cycle, so that we can grind it up and turn it back into new insoles,” he says.

Primal is supplied with cork sheets by Amorim, in Portugal, the largest cork producer in the world. Amorim sources its cork from certified forests on generations-old family farms. No harm is done by harvesting bark from the Quercus suber cork oak tree, says Even. “In fact, removing the bark every nine years increases CO₂ absorption while aiding the regenerative capabilities of the tree,” he says.

The cork sheets are transferred to Primal’s manufacturers in Porto, where the insoles are designed, made and boxed before being shipped over land to a smart warehouse, Huboo, in the Netherlands. Each product is less than 3cm in height and 250g in weight, enabling Primal to send packages to customers via regular mail, further limiting CO₂ emissions.

Even says studying his MBA gave him the opportunity to take time out to assess new ideas and possibilities. “Bocconi was able to provide me with the platform to think about, try and fail different business ideas,” he recalls.

One project he worked on during the programme was creating a circular business model around a Mediterranean Sea plant. “The challenge to source, use and reuse this natural material to our own benefit, that of local communities and that of the planet opened my mind to the wonders of creating a fully circular self-sustaining business model.”

When 25-year-old Alberto Cabanes met 86-year-old Bernardo, a widower without family, living in a care home, he didn’t just make a new friend. Bernardo confessed that he would have loved to have had a grandson, so Cabanes decided to “adopt” him as a grandfather. Their friendship was so strong that Cabanes, now 34, spotted an opportunity to connect more young people with elders.

Launched in 2016, Adopta Un Abuelo (Adopt a Grandfather) is a non-profit intergenerational companionship programme that connects younger people with elderly participants, allowing the latter to feel listened to and appreciated, while sharing their values and experiences with each other. This can be through visits at care homes or written correspondence.

A smartphone app is used to make the connections and, once contact is established, volunteers can make phone calls, video calls or in-person visits. Adopta Un Abuelo, which has a dozen employees, has also organised more than 125 social events, where so-called Grandpa Hackers teach older people how to use a smartphone.

Cabanes’ aim is to combat the isolation, loneliness and lack of social interaction suffered by the elderly, which often leads to an acceleration in cognitive impairment, loss of self-esteem and depression. According to the Spanish National Statistics Institute, more than 2mn people over the age of 65 live alone in Spain.

“Seeing young people motivated to impact and help elderly people and receive photos, videos, and testimonials of the visits motivates me every day to climb any mountain or resolve any problem,” says Cabanes.

“At first, care homes didn’t want to participate, so finding the first early adopter took weeks of meetings and conversations. I learned that the best thing to buy is comfortable shoes, because the world is changed in the street, not on Twitter.”

The EMBA he has been studying at Iese in Madrid has played an important role. “The EMBA enables me to improve, in real time, operations, finance, or strategy. We are super privileged people, studying in the best business schools in the world. So, as leaders, we have responsibility for creating value through companies with only one goal — to make the world a better place.” 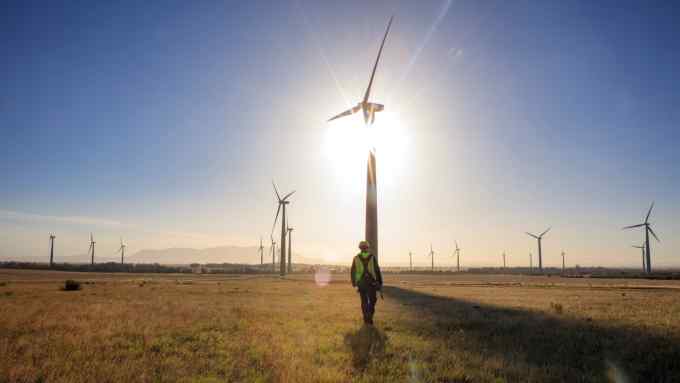