Sumptuous interiors have taken centre stage on screen – and sparked a maximalist revival. Meet the set designers stealing the show

You could not help but notice the wallpaper in Netflix’s mega-hit The Queen’s Gambit. So insistent is it in the suburban house of Beth Harmon’s adoptive mother, Mrs Wheatley, that it almost has a speaking part. Mrs W might be a gloomy old bird but I forgive her for her maximalist taste in design: the midcentury-toned clashing florals, teal geometrics and pink plaids that envelope every room. Even after Harmon leaves that house, wild wallpapers follow her – the green-blue and brown diamond pattern of the Las Vegas hotel room, Osborne & Little’s Trailing Orchid and Angalypta’s Deco Paradiso prints in Mexico City, and in Paris a gold floral wallpaper that was the most expensive used in the show.

Distinctive and extravagant wallpapers have taken on a starring role in TV drama – decorating sets on everything from crime thrillers such as The Undoing to costumed spectacles such as Bridgerton and The Great. Even the latest Netflix hit The White Tiger, set in India, features sexy wallpaper – a reflection of status in the home of a wealthy family. As TV dramas compete to draw in audiences and keep them captivated with fully realised fictional worlds, distinctive design has become more important, and wallpaper a useful tool in the production designer’s kit.

Wallpaper provides a visual clue to the thriller’s mystery

For HBO’s The Undoing, production designer Lester Cohen used wallpaper to convey a complex set of social signifiers as well as to set the mood. Morris & Co’s Golden Lily wallpaper creeps into the opening titles. It’s the first thing you see as Nicole Kidman begins to croon “Dream a Little Dream”. Keen wallpaper watchers will know there is a precedent for this. Another Morris design, Pimpernel, appeared in the titles to the 2017 Danish religious drama Ride Upon the Storm and on the walls of the family’s home. In The Undoing, Golden Lily – so popular in British homes in the 1970s – doesn’t appear in the show itself and is nothing to do with Kidman’s character, Grace, whom one might presume is the little red-haired girl in the titles, but rather her husband, Jonathan’s. It turns out to be a subtle visual clue to the thriller’s mystery.

Meanwhile, in Grace and Jonathan’s bedroom, a handpainted paper, Sepia Garden by the American company Gracie Studio, is both extravagant (more than $3,000 for two panels) and romantic. When, in December 2020, the Los Angeles Times described The Undoing as “wealth as wallpaper: there to prove a pleasing backdrop and not much more”, it was perhaps doing wallpaper a disservice. Providing clues to plot and character, as well as aesthetic delight, wallpapers have never worked harder.

Both Netflix’s Bridgerton and Rebecca deploy handpainted papers by the British company de Gournay. Rebecca used a custom Earlham Chinoiserie in the titular character’s bedroom. Scenes from Bridgerton featured the Abbotsford Chinoiserie, filmed on location in a property on Queen Anne’s Gate, London.

The 18th-century, blue-ground Chinese handpainted paper of the Cabinet Room in Houghton Hall, Norfolk, provided the inspiration for the exquisite wallpaper, crowded with trees and birds and flowers, in the apartment of Russian empress Catherine for Hulu’s drama The Great (recently shown in the UK on Channel 4).

“That room at Houghton was always in my mind. I went back there and took pictures,” says the show’s production designer Francesca di Mottola, who made her name with films such as Luca Guadagnino’s visually stunning I Am Love. Following the pilot, the show was shot mostly on sets created from scratch (at one point, the lavish production had used up all the available gold paint in the UK). Di Mottola and her team created the Chinoiserie wallpaper with the help of scenic painter Humphrey Bangham, who handpainted the design onto a 3.5m by 4m panel. It was then photographed and printed to provide repeats, a process that took around three weeks to complete. “The way I thought about the look of Catherine’s room was that it had been designed for her before she arrived at court,” says di Mottola. “It conveys the naivety you would expect from a young girl.”

Another wallpaper in the series was also made in-house by scanning 18th-century designs found in a market by set decorator Tanya Bowd and printing it onto fabric. “I always try to create texture on walls and I’m particularly obsessed with wallpaper,” di Mottola says. “I love the geometry of patterns, the repeat. I think that’s a very sexy element in design. Even if the wall is a single colour, I’d rather use a fabric or textured wallpaper rather than paint. It gives warmth and creates an atmosphere you wouldn’t have otherwise. For me, attention to detail is so essential. I’ve learnt that from film – and TV is the new film.”

Are these incredible sets starting to normalise the bold?

Francis Hopkinson, an executive TV producer and MD of Expanded Media, agrees that more thought (and money) is now going into the aesthetics of television drama. “Ten or 15 years ago, most shows looked kind of the same,” he says. “Now, if you look at a still of The Great and a still of Bridgerton and The Night Manager, you can tell what each show is almost immediately. The branding is thought through, from the title piece to the colour palette to the set. It’s about being distinctive. There’s so much television and so many places to watch it that you have to make yours stand out.”

Hopkinson says the international funding of productions – where most big shows are made with global partners “who expect a high level of production” has seen drama raise its standards. And of course, now that we’ve all got bigger TV screens, we can see the detail. “Television used to be mostly close-ups and mid-shots. The wide shot was a cinematic thing. But now our bigger screens make the visual much more important.”

All this comes at a time when there is also a swing towards wallpaper as a decorating tool. Beata Heuman, the Swedish-born, London-based interior designer, uses bespoke wallpaper and murals on the walls of her own home and those of her clients, and has seen a return to the decorative after years of minimalism. “We’re now in an evolved version of what was happening in the 1980s,” she says.

Outstanding and grand bespoke wallpapers have continual appeal – Rosendale Design recently used a de Gournay Chinoiserie in the dressing room of the home of chef Jason Atherton, and Jade Holland Cooper and Julian Dunkerton (the co-founder of Superdry) have a jolly jungle-themed bespoke de Gournay in their baby’s nursery. But new British brands such as Ottoline and Ceraudo (used by the interior decorator Nicola Harding in the recently opened Mitre Hotel next to Hampton Court), with their pretty, graphic and floral repeats, are appealing to a younger generation of home decorators. “That 1950s thing where you see paper and fabric in the same print in the same room is coming back into fashion and it’s really fun,” says Harding.

More esoteric and ambitious – and pretty mindblowing – wallpaper designs are being created in Brooklyn by Calico Wallpaper, founded in 2013 by Rachel and Nick Cope. These are bespoke wallpapers as “immersive spaces” – its bestseller Aurora, a custom-printed gradient, is described as “a reflection on the endless variation in each day’s cycle of dawn and dusk” and must be like having a vast expanse of desert sky on your wall. “People are definitely reconsidering this blank canvas that is their wall,” Cope says. “Perhaps everyone is looking for a level of wow factor now.”

How To Spend It
Cult shop: a wallpaper wonderland 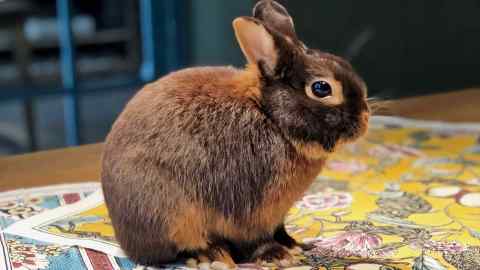 It can certainly accrue those Instagram likes, as the owners of London’s Annabel’s club, redesigned by Swedish interior architect Martin Brudnizki, can attest. The floral-adorned wallpaper in the “Ladies’ Powder Room” has been tagged so many times on social media it has become a global phenomenon. Now, says Nicola Harding, it’s usual to see “Instagrammable bathroom” on the brief for any new hotel interior.

Harding wonders if the bold interiors we are seeing on screen are encouraging us to think more fantastically about how we decorate. “Are these incredible sets starting to normalise the bold?” she says. Di Mottola, meanwhile, is now in production on the second series of The Great and thinking about how the interior of the palace will change as Catherine becomes more powerful. What comes after Chinoiserie? Watch these walls.