Charlie Mayfield accepts cash despite staff having their bonuses slashed

Sign up to myFT Daily Digest to be the first to know about John Lewis Partnership PLC news.

Charlie Mayfield, chairman of the John Lewis Partnership, has accepted a bonus for the first time in three years despite the store group’s decision to cut those for staff to their lowest level since 1953 in the face of difficult trading.

Sir Charlie, who will step down next year, took a £33,000 bonus for the 2018/19 financial year according to the company’s annual report — 3 per cent of his pay — after asking the board to waive his bonus for the previous two years.

The decision takes Sir Charlie’s total remuneration to £1.44m and follows the company’s move in March to cut staff bonuses to levels not seen in 65 years, in the face of a steep decline in profits and difficult trading.

John Lewis cut staff bonuses back to 3 per cent from 5 per cent the previous year — the sixth cut in as many years and down from a peak of 18 per cent in 2011 — citing “challenging” conditions in the retail sector and uncertainty in the broader economy.

The organisation had warned in January it might suspend its annual staff profit share altogether for the first time since 1953, saying the board needed to “consider carefully” whether the “payment of a bonus was prudent in light of business and economic prospects”.

Last month John Lewis revealed a 45 per cent drop in pre-tax profits before exceptional items, as weak sales in high-margin homewares and the impact of heavy discounting by competitors started to bite.

In its annual report released on Thursday, John Lewis said 2018/19 had been “a challenging year in many respects, internally and externally”, adding that it had warned three times since March 2018 on falling profits. 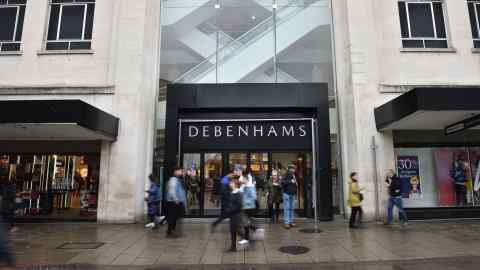 Sir Charlie received £1.1m in base salary, the same amount as the previous year, and he informed the remuneration committee that his pay should remain unchanged for this financial year.

John Lewis staff also face a review of their pension arrangements, in May. In March Sir Charlie said staff increasingly faced a choice between having money today in the form of bonuses or, at a later date, as a pension, warning: “You can’t have it twice.”