Forget brain chips, live experiences are the future of entertainment

Virtual and augmented reality will enhance, not replace, the wonder of real-life experiences

It is the Super Bowl final 30 years from now. The packed stadium dazzles with smart lights that sense the presence of people and avatars of famous American footballers.

As real players get stuck in on the pitch, a chip implanted in each fan beams statistics about the footballers into their field of vision. Spectators can see everything from how far each player has run to their heart rate, throw speed — even their shoe size.

Neural microchips, the likes of which are being developed with the backing of entrepreneur Elon Musk through his partnership with tech start-up Neuralink, could make this scenario a plausible one.

“In a live event . . . not only are you in the venue and experiencing the event, but with the information that AR [augmented reality] is going to be able to give you, it could make your live experience even more unique,” says Scott Radecic, senior principal at Populous, a US-based architectural firm that designs sports and entertainment venues.

Mr Radecic and many others who work in sport, media and music say that as technology develops, the lines between entertainment and reality will blur.

It is already happening. In December last year, Netflix released Bandersnatch, a standalone episode of the dystopian drama Black Mirror that allowed viewers to control the decisions of the main character, commanding their own path through the programme.

“It’s quite clear that entertainment used to be something that’s more of a special moment or something that was separate from your reality, but now entertainment is becoming a total perpetual escape. You can binge on Netflix and you go all the way into the space,” says Gerd Leonhard, founder and chief executive of The Futures Agency, a consultancy that advises firms on innovation.

The concept of an embedded chip delivering an augmented reality (AR) experience for entertainment is extreme. Many warn that the practical and ethical barriers to brain-computer interface technology are high. Concerns include safely inserting the chips into the brain and the level of control they will give a computer over it. According to Neuralink, its initial purpose will be solely medical.

“In terms of integration of technology and the body . . . There’s potential for it but the technical barriers are very significant and the ethical ones and safety barriers are also huge,” says Leo Gebbie, a senior analyst in wearables and virtual reality at research company CCS Insight.

It is more likely that the same experience will be delivered through options that do not involve surgical implantation. This could include cheaper and more wearable versions of Google Glass, Microsoft Hololens or via smart contact lenses, though Mr Gebbie adds that the difficulty with the latter is working out how to power something in the eye.

CCS expects significant launches of wearable AR devices that are more pleasant and fashionable to wear. Items such Focals, by hardware company North, which you can barely distinguish from a pair of reading glasses, will become more common and intelligent.

Do we want to live in a world where people spend the majority of their time in simulated rooms?

Jon Rowe, a virtual reality (VR) engineer, believes that our leisure time will be devoted to VR. The technological challenge will be making the virtual world appear seamless with the real one.

“We are bombarded by all kinds of information and our bodies have evolved over millennia to receive that information and process it so we can understand the world that we’re in. To replicate that in a technological way is a massive feat of engineering,” he says.

But there is a risk that the rapid gains of technology by 2050 may deter people from the virtual space altogether.

“Do we want to live in a world where people spend the majority of their time in simulated rooms or in mental simulation because they could?” Mr Leonhard asks. He adds that analogue experiences are superior for the human brain because “it taps all channels” and he expects the live events industry to “explode”.

Mr Radecic, who played in the NFL for 12 years before joining Populous, says that all the talk of virtual and augmented reality ignores the wonder of the live experience.

In 2050, he says, people will still admire unaugmented human ability: “If there is an amazing long throw or a great corner kick, there is a childish wonder about how did that guy do that?” 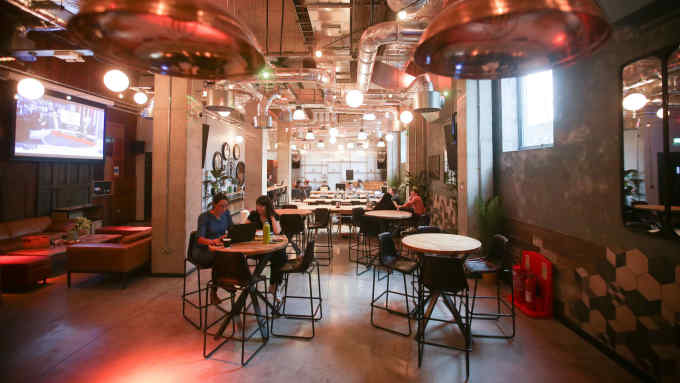