The Acceptance in Lieu panel decides whether owners of artworks, including archives, can reduce their inheritance tax bill

Edward Harley, second Earl of Oxford and Earl Mortimer, was the leading collector of his day.

Almost three centuries on, his descendant, also called Edward Harley, chairs a government body that often finds itself with the delicate task of breaking up collections of great art.

The 57-year-old former partner at Cazenove heads the Acceptance in Lieu panel. This is the group of art experts appointed by government who have the job of deciding whether owners of works of art, including archives, can reduce their inheritance tax bill by offering treasures to the state.

Most of the UK’s great public galleries — the National Gallery, the Tate, the Dulwich Picture Gallery — were founded in the 19th century on the generosity of philanthropic collectors.

Acceptance in Lieu, which has its origins in David Lloyd George’s People’s Budget of 1909, allows the transfer of important works into public collections. This is both tax-efficient for the original owners, as well as an important form of support for the UK’s publicly owned museums.

Critics of the scheme charge it is enjoyed only by the rich. HM Revenue & Customs data show that only about 4 per cent of estates are liable for inheritance tax and of those, an even smaller proportion would own art of the pre-eminent quality required.

Jan Zeber of the free-market TaxPayers' Alliance says such exemptions are a good reason for inheritance tax to be scrapped all together.

“It ends up being paid by those who could not afford efficient tax planning, or in the case of this specific exemption, did not happen to have any items of national importance”, he says.

For regional museums and galleries, Acceptance in Lieu has offered an important lifeline at a time of cuts in public spending

But Harley says his 11-strong panel, which reports to the Arts Council, has been instrumental in stopping priceless works of art from leaving the country. The panel also plays a key role in supporting cash-strapped institutions that have come to depend on the scheme to refresh their collections.

In 2017, a total of 44 artworks and historical items, with a value of £40m, changed hands under Acceptance in Lieu or the Cultural Gifts Scheme, a similar tax break that the panel also administers, allowing collectors to reduce taxes during their lifetime by donating works to be held for the benefit of the public.

The concession is normally applied to individual estates though it can also be used by trusts. Harley says the scheme was vital in saving the Benozzo Gozzoli drawing, believed to be the only surviving drawing from the Medici Riccardi Chapel in Florence. It is now part of the British Museum collection.

“That is the greatest Old Master drawing the British Museum has acquired in the last 20 years. It would almost certainly have left the country, whether it went to the Getty, or the Kimbell or somewhere else,” he says, referring to the J Paul Getty Museum in Los Angeles and the Kimbell Art Museum in Fort Worth, Texas. But he stresses the panel does not deal just with very high value artworks.

“For every Van Gogh that goes to the National Gallery there’s a Raphael Mengs that goes to The Beaney House of Art and Knowledge in Canterbury,” Harley says.

For regional museums and galleries, Acceptance in Lieu has offered an important lifeline at a time of cuts in public spending by local authorities.

He mentions the example of Lucian Freud, whose executors’ deal with the panel after his death in 2011 was worth about £16m in reduced taxes. The artist’s possessions included a Corot, a Constable, the painter’s notebooks and early drawings, as well as the largest privately owned collection of works by his friend, the figurative painter Frank Auerbach. “Many people said we must keep them in one place,” says Harley. “Someone may choose to put them together in an exhibition in the future, but we felt it was right to break the collection up.”

Many local museums benefited, including Hartlepool, which received its first piece under the scheme. A drawing and an oil painting went to the New Art Gallery in Walsall.

Many countries have tax breaks for art owners. In the US, families generally strike deals directly with galleries. But Harley contends the UK scheme works better than most. “At the Acceptance in Lieu panel, we act as a proofing body both to ensure fair play and that taxpayers get good value for money. We are completely independent. I think that gives our system great strength.”

Harley, who has been in charge since 2013, also presided over the introduction of the Cultural Gifts Scheme. Its first item was a journalist’s collection of John Lennon lyrics, now in the British Library.

The panel can also recommend a so-called in situ offer, where ownership of an artwork passes to a gallery or museum but remains on display in its original home. This is what happened to the collection of 89 Roman busts at Castle Howard in Yorkshire, now owned by National Museums Liverpool.

“I would suggest that any estate that has a tax bill and has chattels that are possibly pre-eminent ought to consider the Acceptance in Lieu route,” says Harley.

The panel seeks expert opinion from academics as well as those in the trade, though it does not “use the auction houses for expert advice because so often they are advising the families”.

Harley says sometimes the panel will offer more than the value submitted. “We can, occasionally, pay a premium if we believe the value is too low. I think it’s important that we are seen to be completely fair on price because that way people trust the schemes and want to use them.” 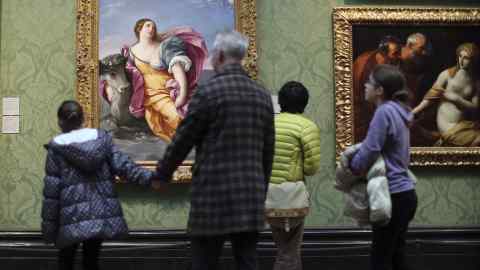 The panel’s main task is to decide on the value and historic, scientific, or local significance of a piece. This was easy in the case of the Auerbachs. “Freud, unsurprisingly, had a . . . good eye. He didn’t just buy any Auerbach. And, as a rule, he didn’t buy them directly from Auerbach, who was his friend. Freud bought his Auerbachs in the market.”

As the Museums, Libraries and Archives Council noted in 2008, “in no other country are so many key historic and artistic treasures still in private hands, some in private houses and others on loan to public museums and galleries”.

But the example of Freud’s Auerbachs provides a reminder that not all great collections are housed in the grand homes of the old aristocratic families. They are sometimes found in the possession of artists who typically have not done much estate planning.

“It may have been that it was predominantly the historic collections in the past,” Harley says. “But I would suggest it really isn’t [the case] any more.”