Why London Fashion Week Men’s is still a must-see

Let’s be frank: London’s still-fledgling menswear week (well, three-and-a-half days, but who’s counting?) cannot be expected to compete with Milan, Florence or Paris in terms of established, universally-resonant names nor financial clout. The closest it got this time was a quiet off-piste presentation by Sarah Burton of her Alexander McQueen menswear collection (the designer herself was absent; the clothes were fine, painstakingly tailored in the house tradition, and did the talking for her). Where it does offer competition is ideas. The best shows of spring/summer 2020 nailed down a distinct, emphatic point of view. If London is a pit-stop rather than a destination when it comes to commerce, in ideas it is a must-see.

That said, brave and new ideas can often seem alarming, even alienating before they become alluring. Compelling though they may be, there was a niggling sense at some shows of an inability to conceive of many of these clothes making their way beyond their established niche and pulling in a wider audience. Eden Loweth and Tom Barratt, who design under a label named Art School which describes the nature of their experimental shows, have said that they “have always thought about how to represent queer communities in a new and more authentic way.” That way involves lots of dresses, which their audience whooped and applauded and may very well wear. And perhaps it speaks to a disenfranchised group who don’t see themselves reflected in the morass of wider fashion; but it will never be broad in its appeal.

At the Loverboy show of Charles Jeffrey, an audience member was valiantly attempting a “look”, painted blue with eight-inch talons on one hand and a military officer’s hat atop their head. They couldn’t applaud Jeffrey’s Loverboy clothes, obviously, but they doubtless wanted to, and to wear them to an East London club-night. Both Jeffrey and Barratt not only designed the clothes, but modelled in their own shows.

So, two points of view, both loosely connected to an intentional-or-not conservative-baiting notion of gender-blending, inside the clothes and in the fabric of them themselves. The concept is laudable, and interesting — perhaps more than the clothes. Which in Art School’s case were essentially sequinned evening dresses and leopard bustiers sported by models lurching down the catwalk like characters in Monty Python’s Ministry of Funny Walks. They looked well-made but, again, besides the context and the art school rhetoric, unremarkable. Jeffrey’s clothes were more complex and sophisticated, and the venue more impressive — the British Library, which is collaborating with this much-lauded designer. But they weren’t entirely original: there were shades of McQueen, and John Galliano, and Vivienne Westwood especially, who has tub-thumped literature for decades and made jackets shaped like armour very similar to Jeffrey’s. Even this designer’s presentation — figures walking the catwalk and reading tracts of poetry in-between model meanders — was done by Westwood last season.

Imitation is the sincerest form of flattery, but it neuters the impact of ideas. They’re not quite that shocking, when we’ve seen so many of them before: just as the deep blue something clapping with one hand in Leigh Bowery drag barely warranted a flicker of the eyelids.

Something we hadn’t seen before was Stefan Cooke’s show — besides the photographic prints of past costumes, like a frock coat of ruffled evening dress, applied to jersey separates. And also besides the past shows by the designer himself, working alongside his partner Jake Burt. If the past few years have seen London’s younger menswear talents seized by an urge to pump up the volume in square-cut judo-y layers in emulation of this generation’s breakout star, Craig Green (who shows Monday morning), Cooke has pushed in the opposite direction. His silhouette is attenuated, skinny, stretch — his 2017 Central Saint Martins graduation show was largely made out of elastic and Lycra printed with details from other garments, an idea he savvily flogged as a collaboration to hyper-cool French brand Faith Connexion the same year. He also won the 2018 H&M Design Award off the back of his prowess, and technically complex, interesting clothes that resemble nothing less than Hervé Léger-for-him (Cooke’s own admission).

This designer’s clothes aren’t, by and large, what you’d call commercial. But they are unique, and feel special and provocatively different to anything else around there. Which is particularly remarkable when what Cooke often does is take something normal, or familiar, and twist it — like those trompe l’oeil prints, which tricked the eye through their placement, scrambling perceptions of garment and body beneath. Elsewhere, the diagonal motifs of argyle were dissected into a complex knit lattice, or evoked by pinched grids of net. The reverse of those prints, they made a traditionally flat knit into something multidimensional. It was also something covetable, achievable, wearable, scalable, and all those other things that help ensure a designer won’t only be seen, but worn. That’s the challenge, for truly challenging clothes. 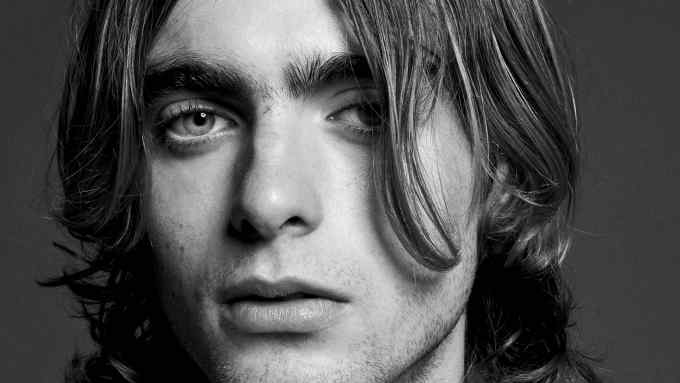