“My great-grandfather opened a shop on the Place de l’Église, in the heart of our village, in 1926 to make sturdy dark suits for the local farmers to wear to weddings and funerals,” says Antoine Allard. “He didn’t know it then but his timing was perfect.” The town of Megève, nestled between the peaks of the French Alps, was about to become one of the most fashionable winter-holiday destinations in the country. Baroness Noémie de Rothschild and her ski instructor had just selected it as the choice location for a French mountain resort – one to rival those in Switzerland. Skiing took off for the French beau monde, and AAllard soon became the go-to tailor for snow clothing.

Customers have continued to flock to the pine-panelled boutique, which remains in its original chalet on the town square, coming both for the refined après-ski wear and for the store’s most iconic innovation – the modern ski trouser. Soon after the shop’s founding, locally born ski champion Émile Allais became frustrated by the constraining or baggy designs of the 1930s and asked his tailor, Armand Allard, to come up with a streamlined update that would allow him greater flexibility. Together they invented the fuseau – a pair of trousers that tapered at the ankle and hooked under the instep, making them easy to tuck into ski boots. In 1937, when Allais won the World Championship triple crown – downhill, slalom and combined – wearing Allard’s trousers, the style caused a sensation. “It was this garment that basically created modern skiing,” says Antoine.

Though still high-waisted and narrowed at the ankle, the trouser range has since expanded to include chocolate-brown lambskin styles for women (€1,200) and mocha-coloured flannel cargo pants for men (€350). Parkas are similarly sumptuous, in pebble-grey quilted wool and cashmere (€3,880) or ivory wool and cashmere with a detachable internal hooded vest (€5,417). “I believe in tradition but with sensible innovation,” says Antoine of his designs, noting that the pockets in their jackets have been fashioned to hold the larger iPhones.

Jean Cocteau dubbed Megève “the 21st arrondissement of Paris” in the ’50s, and as the town’s popularity with bourgeoisie holidaymakers has continued to grow, so too has AAllard’s collection of cashmere and merino après-ski wear.

It’s this “chalet-wear”, now by a range of makers, that accounts for most of the current inventory – think cable-knit cashmeres in delicious tones of tomato and absinthe; numbered limited-edition cotton shirts from tailors in France and Italy; and sheepskin-lined wool jackets, corduroy trousers and sports jackets with fabric by Loro Piana. Womenswear includes duvet coats with cashmere collars and celadon-coloured turtlenecks with raglan sleeves – reflecting what Antoine calls “le Megève lifestyle”. The single bestselling item is sheepskin slippers embroidered with the AAllard logo, which are made in Suffolk, England. Everything is designed to be suitable both for lounging around the chalet fire or meeting friends for dinner at classic Megève restaurant Flocons de Sel.

The shift into off-piste wear has allowed the shop to play to its strengths. “Working with neoprene and other active-sports fabrics wasn’t the best use of our tailoring talent,” explains Antoine, noting that almost everything is made to their own designs and finished by hand. But “a certain Savoyard spirit and athleticism still remains the DNA of what we do today”.

HTSI
How skiwear slalomed into our wardrobes 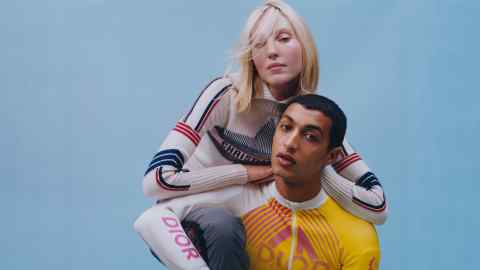 While designs are often playful, “they’re never ostentatious”, Antoine says. “We have been called the “Hermès des Neiges” [Hermès of the snow], which is very flattering, but we’re different in one important way. Our shops [one for clothing, one for accessories] are only in Megève. A world with the same names everywhere is boring.” His family’s shop will survive, he believes, because “elegance and comfort never goes out of style”.