Most US voters fear reopening of schools, FT poll shows

Nearly two-thirds of Americans fear it will be unsafe to send children back to school this year, according to a new poll for the Financial Times that showed deepening pessimism about the course of the coronavirus pandemic in the US.

The concerns over the safety of school reopenings are part of a broader sense of unease that has gripped American voters with just three months until November’s presidential election.

The monthly survey of likely voters for the FT and the Peter G Peterson Foundation found that 64 per cent were not confident it will be safe for elementary, middle and high schools in their state to reopen in the autumn owing to outbreaks of coronavirus.

Women were more likely to express concern than men and respondents were sharply divided along party lines. Nearly nine in 10 Democrats said they were not confident about school reopenings, compared with almost four in 10 Republicans.

The FT-Peterson poll also showed that fewer voters believe there will be a quick economic turnround than at any time since the start of the pandemic, and only 24 per cent believe the outbreak is getting better in their community.

Nearly two-thirds of voters think lockdown restrictions should not be eased in the next three months — a significant jump from the 50 per cent who wanted to see social distancing measures lifted just a month ago.

Importantly for Donald Trump’s re-election chances, the latest survey found one-third of Americans say they are now worse off than when Mr Trump became president, the highest number since the FT began asking the question last October.

Although there remained sharp partisan differences, the share of Republicans who said they were worse off increased by four points, from 7 per cent to 11 per cent.

Taken as a whole, the survey showed a significant weakening of support for Mr Trump’s attempt to quickly reopen the US economy and schools.

Black voters were more likely than their white or Hispanic counterparts to be wary of school reopenings, with 83 per cent of black respondents saying they were not confident it was safe. A disproportionately high number of African-Americans have contracted the virus and died from it.

Some schools in the South have already reopened, but in many cases students, teachers and administrators have been forced to quarantine in response to outbreaks. In one school district in the suburbs of Atlanta, Georgia, 1,200 people have been ordered to quarantine after a student tested positive for the virus.

Democrats have for the most part been more reluctant to reopen schools, but there have been notable differences from state to state. Andrew Cuomo, the Democratic governor of New York who has clashed frequently with Mr Trump over the coronavirus crisis, has said New York schools will be allowed to reopen depending on infection levels in their region.

The FT-Peterson poll, conducted from August 5 to 9, asked likely voters whether they thought reopening schools would harm the economy by spreading coronavirus and leading to another round of lockdowns. Sixty-one per cent of people agreed with that statement, compared to 39 per cent who said school reopenings would be good for the economy because they would allow parents to fully return to work.

Four in five respondents said leaders needed to prioritise the health of students, teachers and parents, while one in five said the economy should come before health concerns.

The FT-Peterson poll seeks to follow whether likely voters feel better or worse off since Mr Trump became president in 2016. Ronald Reagan defeated Jimmy Carter in 1980 after asking US voters: “Are you better off than you were four years ago?”

Joe Biden, Mr Trump’s Democratic opponent, has made attacking the president’s handling of coronavirus a pillar of his campaign, and leads the president in nationwide polls by 8.5 points, according to an FT analysis of the past two months of polling data from Real Clear Politics. Mr Biden is also ahead in a number of battleground states that are key to winning the Electoral College, such as Florida, Michigan and Pennsylvania.

The FT-Peterson Poll was conducted online by Global Strategy Group, a Democratic polling company, and North Star Opinion Research, a Republican group, between August 5 and August 9. It reflects the opinions of 1,001 likely voters nationwide and has a margin of error of plus or minus 3 percentage points. The Peterson Foundation is a non-partisan, non-profit organisation focused on America’s fiscal challenges. 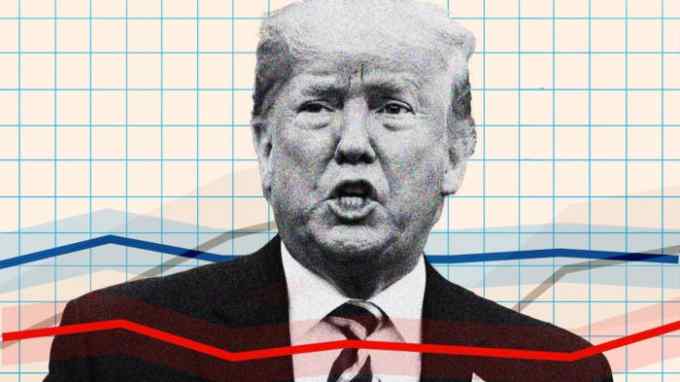