The unstoppable rise of Jessie Buckley

The star of Cabaret and Oscar-tipped The Lost Daughter talks gigs, gardening and gratitude

I have just ordered a pair of coffees at the Corinthia hotel on London’s Embankment when Jessie Buckley’s number flicks up on my phone. “Hi, it’s Jess. You’re not going to believe this,” she says, a note of exasperated laughter in her voice, “I’m stuck in the revolving door…”

As anyone who has followed her career knows, no door stays shut in Jessie Buckley’s face for long, and she finally emerges, a long herringbone overcoat covering a cosy blue rollneck jumper, wide woollen checked trousers and a pair of well-worn black-and-white-striped Adidas trainers. Her naturally curly red hair is styled short into a severe angular bob for her latest stage role as society girl-turned-nightclub singer Sally Bowles in Cabaret.

For a woman whom Andrew Lloyd Webber described as having “the sacred flame of star quality” aged 17, when she took part in his and Cameron Mackintosh’s reality television show I’d Do Anything to be cast in Oliver! (denied victory, she was runner-up), she is delightfully unstarry. We are meeting three days before Buckley, now 32, takes the stage for the first preview of Cabaret, at the “Kit Kat Club” at the Playhouse Theatre alongside her co-star, Eddie Redmayne. Tickets are scarcer than hen’s teeth.

It’s the latest step in a career where she doesn’t seem to have put a foot wrong. Her acting breakthrough came as the devout Marya Bolkonskaya in the BBC’s mega-adaptation of War & Peace, and the roles she’s since played have revealed a range that can take in the surreal (Charlie Kaufman’s baffling I’m Thinking of Ending Things), the darkly funny (homicidal nurse Oraetta Mayflower in Fargo), the troubled and troubling (a young woman who falls for a serial killer in Beast), the cut-glass posh (Judy), and the ballsy (a Scottish country-and-western singer in Wild Rose). Her natural voice is a caramel-smooth southern Irish (she grew up in Killarney), but she also has a black belt in accents – Minnesota, Glasgow, the Queen’s English... ask her where she will. And then there’s the singing voice – she’s as brilliant a musical mimic as Jane Horrocks in Little Voice, but also writes and performs as herself and has played a set at Glastonbury.

Right now, she can’t wait to get back in front of a live audience. “I think I might combust. I literally think I might go up in flames. I’m so excited,” she says. For Cabaret, the whole theatre is decked out to feel like a Berlin club in the 1930s. “I’ve played tiny little gig venues where you’re literally on somebody’s lap and I’ve played Glastonbury. But I feel this production is going to feel so new because of what has happened in the last two years.”

Buckley’s Sally Bowles is a hard-hitting performance: naughty, manipulative, angry and very human. “The prospect of seeing her play Sally was just too enticing,” says Redmayne, who had no doubt who he wanted the producers to cast as his co-star. “She has a free spirit and a massive heart – and rebellion in her. The great actors take extreme risks and Jessie does that and it leaves you breathless in the moment.”

That anarchic spirit and fearlessness is something that also instantly struck Maggie Gyllenhaal, who directed Buckley in her debut film The Lost Daughter which has been picking up much Oscar-buzz on its perambulation around the film festivals and will be released on Netflix on 31 December. “She’s kind of a wild animal,” Gyllenhaal says. “So I tried to create an atmosphere on set where we could capture the wildness that’s naturally in her.”

Based on Elena Ferrante’s novel, Gyllenhaal’s film tells the story of Leda (played by Olivia Colman), an academic and mother of two grown daughters, who has taken herself off on holiday alone by the seaside. Buckley plays Colman’s younger self, her story told in flashback. A twist at the heart of the film involves a wrenching emotional decision. Buckley rises to the challenge. “I think what you are watching with Jessie is a woman actually learn something, actually grow, actually stretch on screen,” says Gyllenhaal, “as opposed to watching someone pretending to grow or stretch.”

“It was amazing,” says Buckley. “Maggie dared me. She was like, ‘Don’t reduce yourself, don’t be a little girl, step into something bigger.’ I jumped off the cliff with her. I feel there’s lots about me that I don’t know and life is so finite,” she continues. “My biggest fear is being asleep all my life – in whatever context. So if that means putting myself in a space that is new, then that’s exactly where I want to be.”

She has also, in the past year, wrapped two other films. Men, by Alex Garland, about “a woman who is a widow who has gone away to a house in the English countryside to heal… and then stuff happens”. The other is Women Talking, with Frances McDormand, Ben Whishaw, Rooney Mara and Claire Foy, based on Miriam Toews’s novel about a Mennonite community in Bolivia where the women are drugged and systematically raped.

I suggest that many of the pieces she has been involved with have a slightly nightmarish quality. She pauses, not sure she’s happy with the word. “I mean life is hard, isn’t it,” she says eventually. “I guess I like the bite in a film. I like the journey and I like dreams. I think it’s an illusion to think that there isn’t that struggle in life generally.”

Buckley has spoken in the past about suffering panic attacks as a teenager and later having therapy to help with the “wolves” within. Lady Gaga has just revealed the psychological toll getting stuck in character as a murderer in House of Gucci had on her. Does she find it hard to come down from harrowing roles? “I’m not [a] method [actor],” she says. “But yes, it does affect you. I think on the back of both these films [Men and Women Talking] I got a bit of a shock. I was like, ‘Oh, God, that is coming deeper and you’ve got to mind yourself.’ That’s why going back to somewhere like Norfolk” – where she has recently bought an old 17th-century house full of cobwebs – “having toast, doing gardening, is like, that’s my place. And I know that about myself now.”

Watching Buckley joking with the stylist and photographer then turning it on for the camera a week before our interview, it’s hard to imagine that she wasn’t always the person who brought the joy to the room. She was known as the “lone ranger” as a kid. “I was a disaster teenager,” she says. “I would never go back there. I think I genuinely needed [the music]. It was my happy place. Music and doing school shows became my survival really.” She describes her parents as “amazing”: “My dad’s a bar manager and my mum’s a musician, and they taught us [she has a younger brother and three younger sisters] to just experience life.”

I ask if they were worried about her taking on I’d Do Anything at such a young age. Absolutely not, she says. And of course it opened doors to her that could have taken years to kick down. She turned down the offer to understudy Nancy in Oliver!, instead taking a part in Trevor Nunn’s revival of Sondheim’s A Little Night Music. Then, rather than pushing on with her career, she decided to retrench and learn her craft by going to study at RADA: something she says would probably not have been possible but for a man called Tony Bernstein, a non-industry-related mentor who offered her support. It has meant that she can do the same for her own siblings: “What’s really nice is that they are in a similar place now and because of this man, because of how lucky I’ve been, I now can pass it forward to them and be, like, ‘Don’t worry about [being able to afford] it. I’ve got your back. You just go and be brilliant.’ I’m very, very grateful to him.”

That gratitude remains a base line that underscores all of Buckley’s life. Last year she joined Neill MacColl (brother of Kirsty) and his wife, Kate St John, to record a single to highlight the dangers facing frontline workers under Covid-19 and to support the Royal College of Nursing Foundation Covid-19 Support Fund. Similarly, following making Wild Rose, which told the story of a young mother trying to rebuild her future after a year in prison, Buckley organised a gig in Mountjoy Prison in Dublin. She also wants to talk about The Matt Talbot Community Trust, a Dublin charity for which she is an ambassador, which opened in 1986 to help adults coping with addiction or who have had contact with the criminal justice system. “I became involved through my uncle,” she says. “He had been in and out of the Matt Talbot and had an addiction, and this place has been a huge part of my life. For me, it’s another family. Wherever you are, whoever you are, whatever struggles you have, how little you have in your pocket, it doesn’t matter, it’s a door that is always open to help and to nurture.” 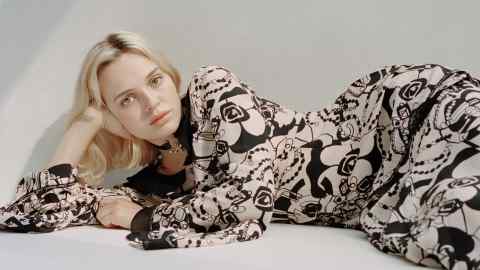 In 2018 the centre suffered a catastrophic fire and is still operating under greatly reduced circumstances. Buckley did a gig in Dublin in 2019 to raise funds and there are plans for another in 2022. “If we can do a concert next year that will get us over the finish line and the centre will be complete,” says Grainne Jennings, the Trust’s director. The money is important, but Jennings’ focus is as much on what Buckley brings emotionally to Matt Talbot and the people who come there. “The level of humanity that she brings to the table and the empathy. She has a wonderful capacity to tune into the unsaid.”

As to what’s next up for Buckley after Cabaret and a performance which further confirms her status as one of our great vocal talents, might there be a solo album on the cards? She won’t be drawn on that, but by the sound of it, it wouldn’t take much to get her back out on the road: “I like to be gigging. I like being with an audience. There’s nothing better than seeing one person’s face in the audience and being like you’re having a journey, a trip with them, you know. It’s everything.”

READ MOREThe Oscars 2022: everything you need to know
The Power of the Dog’s Oscar-nominated producers: ‘This film could be transformative’