An FT roundtable reveals a growing emphasis on sustainability alongside profitability

Environmental, social and governance (ESG) issues have been rising up the agenda for companies and investors around the world. They have a particular resonance in Brazil, not just because of its vast natural riches but also because of its huge agribusiness sector.

Here are some edited extracts from their discussion:

Marina Grossi, CEBDS: We started work on a movement to fight illegal deforestation. The main message is that [Brazil’s] CEOs are concerned about illegality, and now we have about 90 companies signed up.

This started as a communiqué but now it’s a movement, because we’ve been talking with all the authorities in the government [and saying]: “This is not a matter of government or of a party, it’s a matter of Brazil’s chances of competing in this new economy.”

The message is that we can preserve and produce — I think that’s the most important message in the communiqué.

FT: Walter, you were there when this communiqué was drafted, what has changed since?

Walter Schalka, Suzano: We have a nice opportunity next year during COP26 in Glasgow [the UN Climate Change Conference], where we can address chapters 6.2 and 6.4 of the Paris agreement [on creating a carbon market] and implement a very critical tool to change the situation — we can have the cap-and-trade agreement addressed.

FT: Ilan, how are investors taking ESG on board and what do you think it means for Brazilian companies?

Ilan Goldfajn, Credit Suisse: When you look at capital flows coming from abroad to Brazil, they have basically dried up in the last few years [and] part of the reason is that Brazil is not seen as complying fully with the standards that some investors demand.

Secondly, we do have an issue regarding some global negotiations and agreements, there is the trade agreement with the EU which needs to be ratified and this is clearly dependent on having good environmental standards.

We are seeing the private sector coming into action. It’s not [enough] any more just to be profitable, you do need to care about ESG. The famous Milton Friedman theorem that [profit] will be enough is not relevant any more.

FT: Wesley, a lot of the pressure globally has been directed at meat companies. What has JBS been doing to address this?

Wesley Batista Filho, JBS: We have this system called the Green Platform we run daily with satellite pictures to make sure the suppliers we buy our raw materials from are in compliance with [environmental regulations]. We are sharing our system with suppliers, so they can [ensure that] their suppliers are also in compliance. 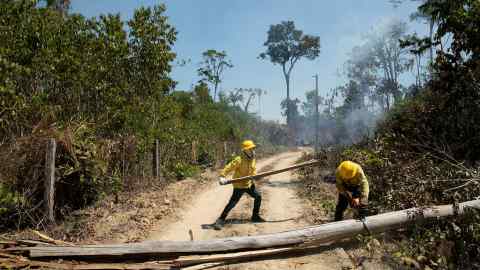 It’s important that we don’t create two types of market, one that’s sustainable and one that’s not sustainable. If we do that, we won’t solve the problem. What we need to do is to make sure that the whole value chain is more and more sustainable.

The second part of our response is the fund that we’ve just created. The name says it all, it’s “Together for the Amazon” . . . there are 20m people who live in the Amazon biome, these people need to have an adequate livelihood, [they need] prosperity and they need to see the forest as an asset.

FT: Annelise, how would you rate Brazil’s efforts so far on ESG relative to other countries?

Annelise Vendramini, FGV: Talking about the real economy and the companies that operate in Brazil, we have made some advances.

For instance, Brazil has a very innovative public policy on agribusiness, it’s called the ABC plan, it’s been around 10 years now, it’s low-carbon agriculture. But we lack the transparency, the recording and the monitoring. This is something that we should improve a lot.

On the financial side, there have been a lot of advances, especially on the central bank side. Since 2008 it has been regulating on environmental and deforestation issues and now it has a very strategic agenda, which is called Agenda BC# [after Banco Central].

READ MOREBrazil: The Road to Sustainability
Petrobras doubles down on fossil fuels