UK healthcare property and services transactions are set to reach their highest level in decades as assets including care homes and the Priory hospital chain are set to be sold.

Investment volumes in healthcare property this year are already 25 per cent higher than in 2019 — at £2.24bn, up from £1.76bn in the whole of last year, according to research by Knight Frank, the real estate consultancy.

It forecasts that transaction levels in the final quarter of 2020 will be the highest since 1995 as a record £6bn of assets in the UK healthcare real estate sector goes on the market, including care homes, mental healthcare facilities and learning disability schools.

The deals come despite several businesses struggling. Four Seasons, the care home provider, is in the process of being broken up after being taken over by creditors, and Spire Healthcare, which has 39 hospitals, warned in March that it had agreed a covenant waiver with banks.

Julian Evans, head of healthcare at Knight Frank, said institutional capital such as hedge funds and investment banks was chasing traditional assets such as care home real estate, while private equity and infrastructure funds were seeking specialist services such as mental health hospitals, which offer a steady income stream from the government.

Another £3bn worth of specialist providers of mental health and learning disability services and £1bn of broader healthcare property transactions, as measured by enterprise value, are also up for sale. Most of these are sale and leaseback deals where property investors own the property but appoint managers to run services such as care for the elderly.

Knight Frank said international investors had been drawn to the sector as Covid-19 had demonstrated it to be a safe haven when many other industries were suffering. The UK had also shown “outstanding collaboration between the private sector, social care sector and NHS at this time of need”, added Mr Evans.

The UK government has continued to pay private healthcare providers throughout the pandemic, while business is expected to increase as the NHS grapples with a huge backlog of elective surgery such as hip and knee operations as well as rising demand for mental healthcare support, most of which is outsourced to private sector providers. 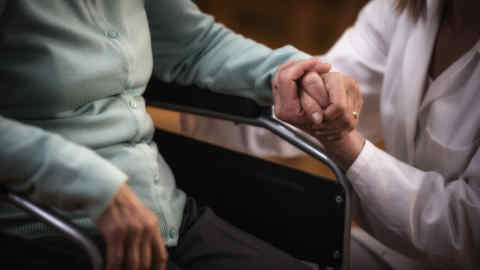 Other factors driving investor appetite include a backlog of deals that stalled in the wake of the Brexit vote in 2016 and the end of the threat of a Jeremy Corbyn-led Labour government in last December’s general election, which was expected to harden opposition to private sector involvement in NHS services. The delay to this year’s budget also encouraged owner-operators to sell quickly as they feared the government could raise capital gains tax, said Mr Evans.

Clare Connell, chief executive of Connell Consulting, which advises on healthcare deals, said the volume of specialist care transactions and the “multiples that quality businesses are being sold for hasn’t been this good in decades”.

“An increasing number of investors are choosing to invest in UK health and social care as it is a non-cyclical market and therefore a safe haven for money in uncertain times,” she added. “There is a cross-party consensus that social care needs to be properly funded and increasing life expectancy is resulting in more people requiring specialist care homes.”

Although occupancy rates at some care homes have fallen below the 80 per cent level at which they are considered sustainable, investors believe that the long-term demographic trends favour growth in the sector. “There will undoubtedly be a flight to quality, with closures of older care homes that are not fit for purpose,” said Mr Evans.