Shows of love and hate — in an era of aggression

Rei Kawakubo dedicated her Autumn/Winter 2019 Comme des Garçons menswear show to “finding beauty in the dark”. A Comme des Garçons show can often feel like finding beauty in the broom-cupboard — there’s a perverse fascination with cramming the audience into as small and dank a space as possible. One memorable season, at the gargantuan palais that once housed the former Paris stock exchange, we were stacked high in a tiny tiled antechamber in the basement. This time was a similar arrangement — a cellar under a restaurant near the Paris Opera — but there seemed a point. The space was dark, as was the collection, which played out to the live music of Australian Death Pop duo VOWWs and gave the atmosphere of an after-hours club. By “dark”, it was apparent Kawakubo meant punk, or goth, or any of those other subcultures that have gripped the world for 20 or 30 years, and consist of surly teenagers slathering their faces with eyeliner and stomping around moodily to loud music, as Kawakubo’s surly teenage-ish models did.

Of course, the darkness could be metaphorical — about the continuing diaspora of refugees and rise of nationalism in Europe, about the darkness of the political situation in America, about the violence of the gilets jaunes protests on the streets of France, who caused optimistically-planned Paris fashion schedules to shift last-minute to avoid disruption. On Friday afternoon, banks around the Comme des Garçons venue had been boarded up in anticipation; by Saturday, Paris was near-deserted. Police patrolled, traffic stopped, roads closed. A Checkpoint Charlie-style arrangement was set up to frisk bags before anyone was permitted into the area for the Sacai show (which shifted from 10am to 9am, to skip the start). Which made Kawakubo’s snarling, black-clad punk hordes, stomping out in shackled sneakers, feel connected to the aggression that is rapidly becoming characteristic of our age. If her gentle women’s show in September was a plaintive bleat for love, to focus on what’s deep inside (using Kawakubo’s own words), her menswear was about exterior presentation of attack. Punks, as they said in the Seventies, just wanted to be hated.

It was nice, however, to see a show tackle the feeling of what’s in the air — which felt connected to what Miuccia Prada showed in Milan, which was also about finding romance in a darkness which, inevitably, can be seen to represent the now. It was certainly more satisfying than the shows of either Thom Browne or Balmain, which, considering that both had been jostled around in the schedule because of those aforementioned protests, posited views oddly immune to the greater world.

You can kind of understand that with Olivier Rousteing’s Balmain. His clientele are elite, moneyed, privileged. If they saw a gilet jaune marauding, they’d probably helicopter to Mykonos pronto and party with Lindsay Lohan. Which is perhaps why, when Rousteing does military berets — as he did for Autumn/Winter 2019 — they resemble something from a Janet Jackson video rather than actual militia gear; and when he does thick-rimmed, Steampunk-ish sunglasses, they look like two jeweller’s loupes screwed into the eye sockets, as if his models were appraising diamonds rather than advocating change.

Rousteing’s show was, he said, about a rebellious spirit, a social insurrection. Make that a social-media insurrection: “Many designs incorporate messages pushing back against the bots, greed and mean-spirited trolling that have dimmer the hopes we once shared for a liberating digital age,” said Rousteing. Punks may have wanted to be hated, but Rousteing wants to be loved. Which is fine, but it did seem like there was a wider message that could be communicated here than the dislike of nasty comments on Instagram. Especially as Rousteing and his designs speak to such a wide audience. As it was, this was libération-lite, with scribbled graffiti slogans like “Things have to change” on Chanel-y tweeds and punkish leathers.

France is filled with graffiti right now — but it says things like “Macron resign”. I wished Rousteing had more to say. But his clothes looked saleable, and attractive. Maybe they should have simply been stripped of socio-political posturing and aimed squarely at a LiLo pyjama party: all surface is better than no depth.

There was no depth to what Thom Browne did, either. As police helicopters whirled audibly above his show, he sent models out in hobble-skirts and oven-mitts made of (presumably single-use) plastic bubble-wrap, and matching hats trimmed with white mink (which felt particularly obscene). The big idea was “Waisted” — outfits presented in triptychs, a normal suit, a compressed trompe l’oeil dress, then the look kind of tumbling away but stitched together at the midriff, all comprised of the same elements — checked coat and suit, say.

As an idea it was slim, which isn’t a corseting reference. Browne’s clothes are provocative, there’s something punk to them — he can excite, he can rebel. He also sells a lot, both of which probably factored into the Zegna group scooping up a controlling stake last year which valued his business at $500m. He has things to say with clothes. Yet, not this time. Like the show title, it felt like an opportunity wasted.

The roads were clear when Hermès staged its evening show in the Mobiler National, a grand repository for furniture of the French republic where modern classics mix alongside Louis XIV fauteuils, footstools and other national treasures. Hermès is also a national design treasure, in a quiet, easy way, using beautiful materials, and classic forms. Its clothes have a purity and an eternal quality. The designer, Véronique Nichanian, is also eternal it seems — she joined the company in 1988 and, after Karl Lagerfeld is the longest-serving non-founding creative head of a fashion house which is often overlooked. At Hermès, they grandly call her the Artistic Director of the Men’s Universe — but there really is a universe of Hermès menswear, where the basic is anything but and the extravagant is grounded in reality. The supple, subtle luxury of this outing was both utterly relevant and a quiet distraction — calm, in the eye of a storm.

Jonathan Anderson’s Loewe isn’t calm — it’s kooky and crafty and handmade and a big old fashion statement. But — and here’s the rub — it is also superlative luxury. Loewe’s leatherwork compares with Hermès’ expertise, and even if Anderson’s design proclivities skew younger and more esoteric than Nichanian’s, he nevertheless ensures the basics are covered. In his first catwalk outing for Loewe menswear, although he took the helm in 2013 and has been designing mens ever since, he grabbed the opportunity to showcase how quiet he can be. Here there were tugged-out sweaters and floppy cuffs, dragged down as if the gravity of the Maison Unesco venue had suddenly vastly multiplied, elongating the body. Pop them back inside, and the suits had a direct, simple appeal.

There were also simple sweaters, in meaty colours of egg-yolk or jambon-pink, and a pair of knockout navy coats — as well as the requisite leather goods, bags and folios and pouches and great gloves. You could dissect and reassemble a Loewe wardrobe to create one for a man fascinated by fashion and another for a man who couldn’t even pronounce “Loewe” but who cares about looking good, and about quality, cut and style. Ultimately, being able to straddle the two is what elevates a designer from good to great — and, in the luxury game, it determines who will be standing after times of trouble and strife. Anderson is going nowhere — last April, he was appointed director of the company’s board. If that prompted this new demonstration of creative and commercial coupling, maybe more houses should follow the lead. 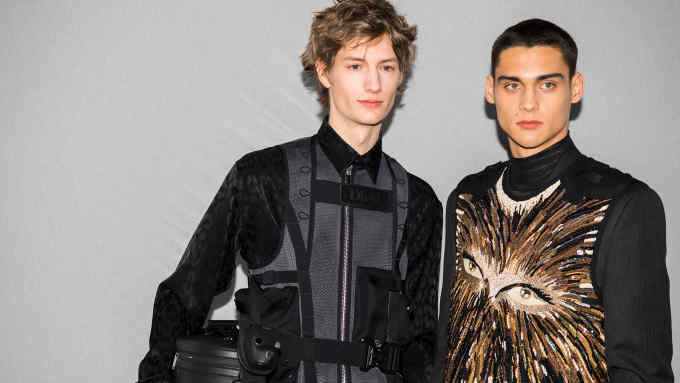