The designer’s purist, tactile process applies to everything, from ceramics to her new Birkenstock sandal line

From artist’s sneakers to sofas, sculpture to oversize overcoats, few designers switch quite so confidently between disciplines as British creative Faye Toogood. “I love the translation of an idea from fashion to art to interior design, and through into a product,” she says of her aesthetic, which is informed by the Wiener Werkstätte’s idea of a “total work of art”. Long drawn to historic sources – from classical to early English to American folk – her approach is to strip things down to their purest essence.

Toogood’s latest creative output – her studio’s first in-house offering of ceramics and a new capsule collection for Birkenstock, which last month was bought by an LVMH-backed group in a €4bn deal – embodies the same sense of purity. In true lockdown style, the “big reveal” for her collections takes place at the shed-workshop at her family home in Winchester, a house she is currently renovating with her husband Matt Gibberd, the architecture writer and co-founder of the design-led estate agency The Modern House. “When you look at ancient furniture and objects, it makes you question how far we’ve really come,” she says. “For me, there’s a connection between a vase and a sandal. They’re these very clear, necessary shapes that have been around for centuries and that we all identify with and understand. Ultimately, you can play around with the shapes, but a sandal is a sandal, and a vase is a vase.”

Birkenstock’s historic pattern archive proved to be a playground for the designer. “It just instantly clicked,” she says of her partnership with the German sandal-maker, which has produced a trio of shoe designs with an accompanying clothing capsule, and a Birkenstock bed. “Birkenstock has been ingrained in my life from such a young age. Erica, my sister, and I wore them as children, our parents wore them. Even now, there are at least two pairs of Birkenstocks for every person in my house.”

To create her Forager, Mudlark and Beachcomber sandals, Toogood has recast the contours of the classic sandal’s uppers, dispensing with the hardware and experimenting with materials including canvas, felt and suede to create a sculpture for the foot. “We wanted to approach the shoes like a piece of furniture. I took along models of sandals made from cardboard, Sellotape and old bits of canvas,” she says of the maquettes she brought to Birkenstock’s factory in Görlitz, Germany. “The product team was thrilled.”

Whether it’s a shoe, a chair or a department-store cubicle, Toogood and her 20-strong team employ an extremely tactile creative process. Each project begins by fashioning miniature models from wire and clay or whatever else they can lay their hands on in the studio; it can take hundreds of iterations to perfect a piece. Yet the finished sandals didn’t stray too far from her Sellotaped originals. There’s also a pleasing seamlessness with which her products are connected. With its rounded, squishy shape, The Beachcomber – which pushed the limits of Birkenstock’s production – resembles Toogood’s Puffy Lounge Chair for Hem.

When it came to creating her new line of homeware – a vase, a jug, a platter, a bowl, a mug and a centrepiece, and a pair of handwoven throws – the same logic applied. The collection started with the jug, an archetypal item that Toogood has long obsessed over; her own collection has always filled shelves and shelves in her homes. “It’s such a simple vessel you have to give it something else – an identity,” she says. This idea of personification underlies every one of Toogood’s creations and each is consciously named as it is conceived. The tableware, for instance, is dubbed Dough for the similarities between pre-fired clay and the act of making bread.

“When I started making furniture there weren’t many female designers,” she says of her latest foray into the domesticated space. “I wanted to assert myself in that world by deliberately working with industrial, ‘masculine’ materials, and avoiding the decorative arts.” Following the birth of her daughter Indigo, and her twins, Etta and Wren, that sentiment has shifted. For now, it’s usurped by a desire to make her work more widely accessible. “I want to create things that can sit on everyone’s table,” she explains.

HTSI
The state of the It bag 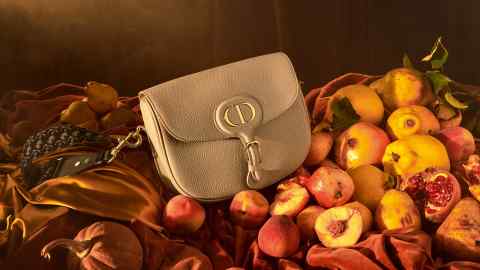 The daughter of an ornithologist and a florist, Toogood grew up in a television-free Victorian townhouse where the rooms were referred to by their colour. Her “make do and mend” mother created everything, from their clothes to curtains to breakfast cereals. “I spent my time being in nature, and making sense of the world through collecting,” says the designer, who would gather sea glass, stones, rocks and fossils to display in her childhood bedroom. Toogood’s own homes over the years have largely been spare and monochrome – her aesthetic synonymous with black and white – but she is now working back towards her inner love of colour, and the joyful chintz of her youth. “People view me as a monochrome minimalist, but I love pattern and colour, and that’s just starting to come out,” she says. She has already visualised how every room in her home will look once renovated – and each will feature some form of cabinet of curiosities to house her passion for collecting. In the kitchen, glass-fronted marble shelves will showcase her recent obsession for Victorian kitchenalia, including a wire egg basket and an ironstone butcher’s block. “I have a lot less stuff than I used to. Living with Matt has refined things down,” she says. Most emphatically, she concludes, “it’s going to be very colourful” with a “pink room” to mirror the one in her childhood home. “It’s only taken 40 years but I’ve come full circle.”