The writer is professor of globalisation and development at Oxford university and co-author of Terra Incognita: 100 Maps to Survive the Next 100 Years

From the US Capitol to Wall Street, the power of social media to mobilise crowds is evident everywhere. It has introduced a new risk to the effective functioning of markets as it has to politics, exposing the limitations of politicians and regulators to manage viral campaigns.

The recent price explosion in the stumbling GameStop was portrayed on the r/WallSteetBets sub-forum on the Reddit platform as a just redistribution that took gains from the pockets of “parasitic” hedge funds that had bet against the struggling US video games retailer into the hands of “ordinary” people.

But the GameStop surge also shows the extent to which financial markets are susceptible to the mobilisation of investment crowds on social media. Investors and policymakers urgently need to understand the implications.

Investor mania is an established topic in economics, but research by Valentina Semenova and Julian Winkler at Oxford university reveals how interest in a stock can form on social media. Through hype and contagion, it then can underpin the retail investor bull runs we observed in GameStop and elsewhere.

We have tracked r/WallStreetBets’ rise from 2015. During last March’s stock market crash, users ardently advertised their purchasing of put options on the popular S&P 500 index — bets on a large stock market downturn.

Social contagion is a well-documented phenomenon: people adopt others’ behaviour, from smoking to product purchases

At the time, their size, relative to the S&P 500, meant any influence was small, and r/WallStreetBets was largely dismissed as a curiosity. However, as the forum exploded in size (it currently boasts 8.8m self-described “degenerates”), its influence has grown more pronounced.

Social contagion is a well-documented phenomenon: people adopt others’ behaviour, from smoking to product purchases. r/WallStreetBets was able to channel this into financial decision-making, attracting those with a particular taste for high-risk bets on stock-specific options that are often at odds with rational economic theory.

Users are encouraged to gamble, with redditors displaying their oft collapsing but occasionally ballooning trading losses and profits, galvanising their peers to adopt similar positions.

The likelihood of persuasion increases as an individual is exposed to more and more discussions on a given asset. It takes a while for interest in a given stock to take off, but once it does, it becomes a self-perpetuating force to be reckoned with.

Our text-based sentiment measures strongly suggest that r/WallStreetBets frequenters strive to adopt the directional positions of their peers.

In other words, they buy (or sell) a stock, not because of any fundamental pattern or news, but because other users also buy (or sell) the stock. This effect is especially large in bouts of selling, pointing to interesting psychological models of investor panic during a downturn. 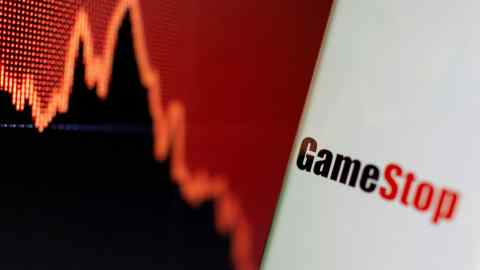 Over 9,000 different stocks are discussed on the forum, but given these dynamics, only a handful, such as Tesla and GameStop, rise to prominence with potential to have an impact on the market.

Given this herd behaviour, it was just a matter of time for a situation like the GameStop frenzy to unfold. And given the dynamics of the social media investor platforms it is likely to happen again.

How to address this is now an urgent challenge for regulators. The champions of free markets, and the users, argue that the platforms allow the markets to work as intended and that hedge funds were caught making bad bets, which they otherwise would have got away with. Silencing the forum for the sake of market stability would be a draconian solution, and unlikely to endure. Anonymity on Reddit makes it harder to pursue market manipulation charges against individuals.

Few in the Biden administration would wish to use political capital defending Wall Street against a Redditor army. However, doing nothing is likely to create unacceptable risks which could threaten financial markets.

Fortunately, social contagion takes time to develop and is possible to track. This means the regulators need not be caught out. Trading limits should be tightened on stocks which display frenzied activity, preventing destabilising market moves. Margin requirements should be increased for stocks that are subject to retail investor herding.

Regulators need to act now to ensure that financial markets are properly capitalised and that this new market development does not provide a new source of systemic risk.

This article draws on work by Valentina Semenova and Julian Winkler