We’ll send you a myFT Daily Digest email rounding up the latest Mexico news every morning.

Mexican authorities have issued an arrest warrant for the former chief of Pemex, the powerful state-owned oil company, and have secured the arrest of the chairman of a steel company in a big step for President Andrés Manuel López Obrador’s anti-corruption campaign.

The arrest warrant for Emilio Lozoya, the former chief executive of the state-owned oil company known as Petroleos Mexicanos, was issued on Tuesday, according to the Mexican state news agency, Notimex.

Spain’s national police announced on Wednesday they had arrested Mr Ancira at Palma airport on the Balearic island at 9:40 pm on Tuesday night as he was about to board a plane destined for Canada.

The Spanish police said he was detained on the basis of an Interpol warrant, requested by Mexican authorities, for “alleged crimes of bribery or corruption, fraud against public administration and membership of a criminal organisation”.

“What I can say is that this isn’t political persecution,” Mr López Obrador, known as Amlo, said in a press conference on Wednesday morning. “They are facts or alleged crimes that must be pursed and punished, that is all,” he said, adding that he does not know Mr Lozoya or Mr Ancira personally.

Javier Coello Trejo, Mr Lozoya’s lawyer, said in a statement on Tuesday evening that his offices could not confirm the arrest warrant though “if the apprehension order does exist and the content of it is known, we will be in position to take a legal posture to exercise an adequate defence”.

The moves to arrest Mr Lozoya and Mr Ancira are the strongest signs yet of the determination of Mr López Obrador to push ahead with his election promise to crack down on alleged corruption, analysts said.

In his first months in office, Mr López Obrador, who began his six-year term on December 1, has launched initiatives to reduce surging fuel theft and renegotiate natural gas pipeline contracts seen as one-sided with unfair terms for the Mexican government.

But the leftwing leader will face a struggle confronting Mexico’s ingrained culture of impunity, analysts said.

“López Obrador came to power by vowing to attack corruption but is this just a news flash or is it something more meaningful that will be the first of many similar efforts?” John Padilla, managing director at energy consultancy IPD Latin America, said in a phone interview.

“As we’ve seen too many times in Mexico, the success rate of arrests or attempted arrests in the country is pretty low. Mexicans are hopeful but history isn’t necessarily on their side,” he added.

Mr Lozoya, who led Pemex from 2012-2016, has been accused of corruption in relation to the company’s purchase of a fertiliser plant in 2016 and his alleged links to Brazilian construction company Odebrecht SA, which admitted to paying kickbacks to executives and government leaders across Latin America in exchange for contracts.

Mr Ancira has been under investigation by the Financial Intelligence Unit (UIF) of Mexico’s Finance Ministry for alleged bank transfers to an affiliate of Odebrecht.

The steelmaker based in the northern Coahuila state said it was unaware of the reasons for the arrest and was awaiting an explanation from the UIF.

“AHMSA doesn’t currently have any official information that supports the basis for these actions, which we consider illegal and arbitrary,” the company statement said.

The FT ViewThe editorial board
Mexico’s president risks undermining himself 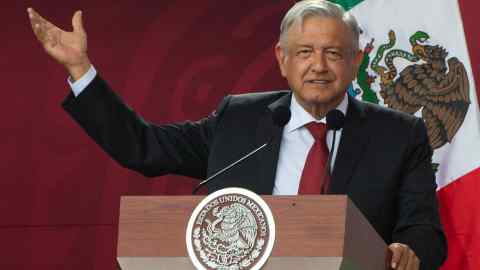 The warrant for Mr Lozoya’s arrest and detention of Mr Ancira are the first moves against Mexican officials stemming from the Odebrecht probe, which resulted in arrests and fines across the continent.

In 2016, Odebrecht executives admitted to US and Brazilian prosecutors that it paid $10.5m in bribes to unnamed Mexican officials, though no legal ramifications followed.

“This case involves an issue that was reported during the previous government,” Mr López Obrador said on Wednesday. “We have said that we aren’t going to stop any process that puts an end to corruption.”